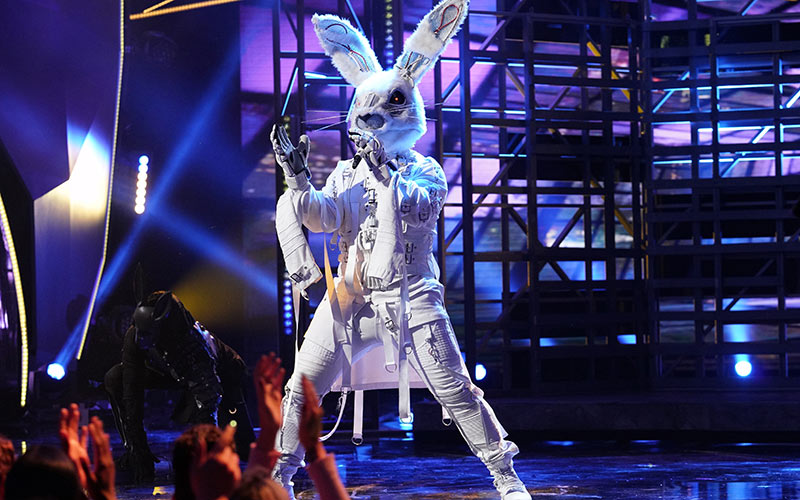 The Rabbit performs during The Masked Singer episode 4. (Photo by Michael Becker/Fox)

Tonight was the first full episode of The Masked Singer that I’ve watched since the premiere—a premiere that I thoroughly enjoyed and was drawn into its mystery. (This story mentions episode four’s unmasked singer.)

That’s faded: When I head who was unmasked in episode two, I just deleted the episode, because I couldn’t figure out why I’d want to watch for an hour. The mystery is what makes everything else tolerable—and there’s a lot that needs to be tolerated, from the judges inane guesses to the obvious clues to the mediocre performances.

Episode four did surprise me: The latest unmasked singer was the Poodle, who turned out to be Margaret Cho.

I thoroughly enjoyed her performance of Cyndi Lauper’s “Time After Time,” which stayed in my head long after the episode ended.

Alas, just when you think the judges couldn’t be worse, guest judge Joel McHale actually guessed that Raven, who performed Lady Gaga’s “Bad Romance,” was Lady Gaga. What?! And one of the clues they were just given mentioned 1968, which is 18 years before Lady Gaga was even born. It’s just stupid. (Some suggested he was joking. If he was, his “jokes” were no different than the rest of the panel’s guesses, which means they’re not funny.)

And even though it was clear Poodle was a comedian, Judge Judy’s name came up, because they’re literally just saying names.

Considering the judges’ track record, that Margaret Cho’s name was never mentioned isn’t a surprise—except she guest starred on Ken Jeong’s show Dr. Ken, as his character’s sister, and he still didn’t recognize her voice, nor piece together any of the clues.

The reveal did lead the series best moment so far, when Ken Jeong said she “is a pioneer in Asian-American comedy” and then directly addressed her: “You are the reason I am a comedian. I love you so much you have no idea.”

The possibility that the judging panel actually knows the masked singers adds an interesting component—I’m surprised the production did that, just because it’s a risk that they’ll be instantly recognized.

I’d like to see more moments like that, and also more of Marina Toybina’s fantastic costumes, so I’m hoping Fox renews the series and tries again, fixing some of its mistakes. It can do that by borrowing from the original.

Fox’s series is an adaptation of a South Korean format, The King of Mask Singer, and I think the key to improving the American version is to become more like the original.

It might not be possible to have the same kind of ongoing, open-ended competition, but King of Mask Singer’s format is much stronger.

I wrote a piece for Vulture outlining five suggestions I had for the show, and as part of that, summarized the original format:

In South Korea, the show moves more rapidly: It’s structured as a tournament that lasts for two episodes and starts with eight celebrities. In round one, two masked singers perform the same song, one of whom is eliminated by votes from the studio audience and the judges. In round two, the four winners face off, each singing their own songs, and then the winners of those battles face off in round three. The winner moves on to round four, where they take on the Mask King, the previous tournament’s winner. When a singer loses at any point, they take off their mask immediately

That’s so much better—and I think it’d work very well as an event series. Air one or two episodes, maybe once a quarter, or for a few weeks in a row at the most.

There’s no reason to stretch out 12 contestants over 10 episodes; most of the singers aren’t good enough to hear twice. In a bracketed, tournament-style competition like King of Mask Singer’s, the good singers would proceed, and the bad singers get immediately unmasked.

Mostly, a shorter, two-episode event might allow the show to get bigger talent (perhaps some singers; the South Korean version is almost exclusively cast with professional singers, who sing outside of their genre).

It’d also be more exciting. So many of The Masked Singer’s clues have been easy, so the longer it goes, the more obvious the singer’s identities are—or at least, the more consensus there is, which dampens that initial excitement I had during the premiere.

Here are my five suggestions for reworking the show:

Read the full piece for details on each.