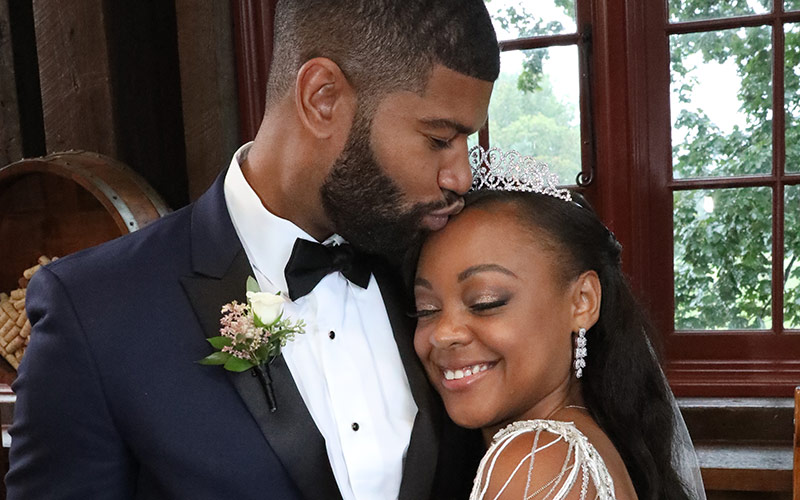 Keith Dewar and Kristine Killingsworth after being Married at First Sight on the season 8 premiere. (Photo by Lifetime)

Five of the 18 couples who were Married at First Sight are still married, a decent track record for a dating reality series. (For comparison, six of the 14 Bachelorette couples are still together.)

For Married at First Sight’s ninth season, it’s expanding: instead of following six people who get paired off by the show’s experts, there will be eight participants and four couples.

The new season premieres tonight 9 p.m. on Lifetime with a two-hour premiere, preceded by a casting special at 8.

Dr. Pepper Schwartz, a sociologist; Pastor Calvin Roberson, a marriage counselor; and Dr. Jessica Griffin, a psychologist, return as the show’s matchmaking experts. The series was filmed this fall.

MAFS has become more of a Bachelor-style soap opera over its life, with the cast’s post-show celebrity generating plenty of headlines, from pregnancies to one of the show’s participants dating one of its experts.

But its central premise hasn’t changed: strangers getting married. And although that has surprising benefits, it’s still provocative enough to raise eyebrows.

You can see that in this clip from the season premiere, as the participants tell their friends and family members about why there are camera crews filming them:

After setting its first two seasons in New York, Married at First Sight followed the early Real World model and moved to a new city every season.

It’s now in Philadelphia, where its participants all live.

If you want to know more about the process that these couples go through, the series’ showrunner, Sam Dean, previously wrote for reality blurred about how the show is produced, from casting to filming, and shared a lot of behind-the-scenes details.

And early in the show’s life, I interviewed Kinetic Content’s Chris Coelen about how Married at First Sight was cast and produced.

That was season one; this is season eight, so here are the eight new cast members who will be paired together, along with their official bios.

“Born and raised in Riverhead, NY, AJ is an only child. His parents, who were high school sweethearts, celebrated their 45th wedding anniversary this year. AJ is inspired by the way his parents have worked through difficult times and stayed together. As the President and CEO of Future Force Talent Connection, AJ has devoted the last six years to building his staffing and recruiting company. Finally at a place where he is feeling established and comfortable career-wise, AJ is eager to find a companion to share his success. He finds it difficult to date online, and when a friend recommended the Married at First Sight experiment, he jumped at the opportunity.  An avid foodie and adrenaline junkie, AJ hopes to find a match who has a similar sense of adventure.”

“Inspired by her parents 30 year marriage, Stephanie hopes to find a man who treats her the way her father treats her mom.  Stephanie is ready to get married and settle down because she is thirty-five years old, and everything else in her life has worked out—except finding her soulmate. She is looking for a man who will be the missing piece to her life and be someone to share experiences with as a team. She is family-oriented, understanding, and knows she would be a great match for a special guy out there.  With travel as one of her major life passions, Stephanie makes a point to collect sand and magnets from each place she’s visited. “

“Jasmine is a Philadelphia native who was raised in a traditional household with traditional gender roles. Her loving parents married later in Jasmine and her younger brother’s lives, and have seventeen years of marital bliss under their belt. Her family is very close- knit and spend most holidays together.  Jasmine is self-sufficient and independent. She owns her own home, has a big work promotion on the horizon, and is surrounded by the love of great friends and family. The only missing piece is a person with whom she can share her life. She aspires to build the same kind of love and stability with which she was raised and hopes the panel of experts in the Married at First Sight experiment will uncover her Barack Obama.”

“Will was raised by his mother and felt blessed to not only have a great father, but a wonderful step-father as well. Family is of the utmost importance to Will.  Will believes marriage is the overall goal in life. He has accomplished many milestones, but finding a partner and building a family are two things he has yet to attain. He is financially, emotionally, and mentally ready for the next phase in his life, and is eager to see if the panel of experts in the Married at First Sight experiment can help him find his perfect match.  Although he is the only single guy amongst his friends, he loves to spend as much time as possible with married couples because he feels it gives him the best insight in what to expect in a marriage.”

“Kate was raised in a household with her parents and two brothers. She enjoyed her childhood very much and has a close relationship with her mother. Unfortunately, last year Kate’s parents divorced and it has been a huge adjustment for everyone. After the divorce, Kate had a pessimistic attitude about love and relationships, but she remains optimistic because she now knows what she wants and doesn’t want in a relationship.  Kate is ready and open to meeting the right person to spend the rest of her life with, and knows she would be a great candidate for the Married at First Sight experiment because she is open to having the panel of experts find a match for her without interfering with their process. She hasn’t been successful at finding a match using her current methods, and is ready for some professional help to find the love of her life.”

“Luke grew up in a family where his parents got divorced when he was very young. He has a close relationship with his mother, but only speaks to his father every so often. His parents’ relationship taught him the importance of not settling because once he finds the one, he plans on being with her the rest of his life.  He graduated from Rowan University with a Bachelors in Civil Engineering. He is currently a civil and environmental engineer for GEI.  Luke is ready for the Married at First Sight experiment because he has exhausted all avenues to find his perfect match. He is successful and ready to share his life with his perfect match, and he is hopeful our panel of experts can help him find her.  A fantastic cook, Luke is in the kitchen almost every weekend whipping up a delicious meal. He is also very adventurous and loves going outside his comfort zone. An adrenaline junkie, one of Luke’s favorite things to do is go skydiving.”

“Keith was born and raised in Philadelphia, mostly by his grandmother; his parents were never together. While their relationship didn’t have a direct impact on how he views relationships, it definitely taught him the importance of not playing with anyone’s heart.  He is a patient care technician, specializing in kidney dialysis. He loves helping people and being a solid rock for his sick patients.  Keith is really tired of the singles scene and he feels like he is at a point in his life where he is mature and open enough to try something out of his comfort zone: the Married at First Sight experiment. He wants to find a partner who values teamwork, building an empire, compromise, and emotional support as much as he does.”

“Kristine was born and raised in Philadelphia and she had a great childhood where she spent a lot of time outdoors and was very active. Her parents have been married for more than thirty-five years, and even though they have had their ups and downs, Kristine still thinks their relationship is the gold standard. A residential real estate agent, Kristine absolutely loves her job.  Kristine is fully comfortable with herself and she knows what she wants out of life. She feels that she has overcome a lot of her insecurities and is ready to share her life with someone else. She is hoping the Married at First Sight experiment can help her find the man she has been waiting for.”