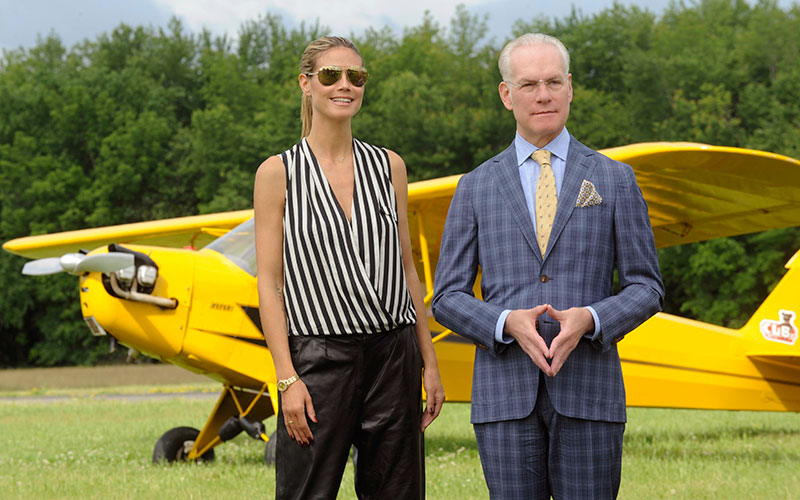 While Project Runway moves on with its new set, host, and mentor, Tim Gunn and Heidi Klum are moving forward on their Amazon Studios fashion design reality show. There have been few details about it, but the show is currently casting, and the application offers several details.

The show is currently casting “talented fashion designers for a groundbreaking, global and shoppable fashion competition series,” according to castingfashiondesigners.com, a URL that Heidi and Tim promoted in a video, and which redirects to a Casting Crane application form.

In the video, Tim says fashion designers should apply if they “have what it takes to compete with the best of the best,” indicating that this isn’t going to be an amateur competition.

The cast will not be restricted to residents of the United States, like so many other American shows.

Instead, applicants can be from other countries—just “must not be a national or legal permanent resident of any country or region subject to comprehensive sanctions administered by the US Department of Treasury’s Office of Foreign Assets Control,” according to the application’s very specific language.

The new Amazon show will film for two months in Los Angeles this summer, from June 1 to July 31, but won’t necessarily stay in L.A. That’s because there’s “the possibility of travel to several destinations outside the United States,” the application says.

Also, there may be a gap in time between the competition and the finale, similar to how Project Runway sends its finalists home to prepare a collection for Fashion Week.

The application says applicants must be available “for up to two weeks at a later date in 2019.”

Those who apply have to be at least 21, and are asked to upload a a video plus pictures of their work, including:

While the application does have standard language giving the show the right to use applicants’ material on the show, even if they’re not cast, it does make it clear that designers will retain ownership of their own work—designers just need to give the show permission for non-specified “exploitation of the Program” and “ancillary rights”:

“I will retain ownership of my fashion design portfolio as submitted to Producer with this Agreement; provided, however, that I hereby grant Producer a non-exclusive, royalty-free license to use material from my portfolio for casting purposes and, in the event I am chosen as a participant on the Program, for use in and in connection with the exploitation of the Program and ancillary rights arising therefrom.”

The legalese on the application calls the show “Untitled Fashion Series,” so that’s no help, but it does specify the production companies: Playroom Productions and Sara Rea Productions.

Sara Rea was the showrunner of Project Runway for its time on Lifetime. “Playroom Productions” is the name of a production company associated with Project Runway Junior and with Sara Rea.

In other words, the show will be produced by someone who’s guided Heidi and Tim’s previous show for the past decade. I’m curious to learn more about what they’ll come up with, and how it’ll diverge from Project Runway.