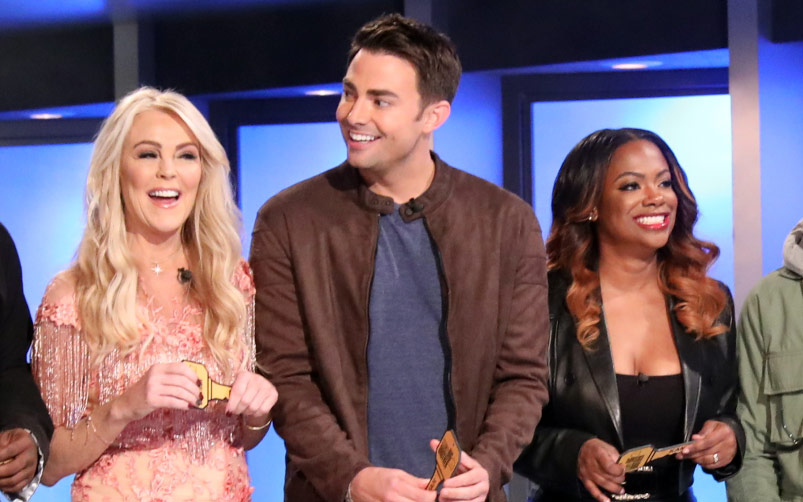 Although the cast is mostly people who’ve been on other reality shows, they’ve been well-cast, as a group and as individuals.

There’s a lot of ridiculousness in this group, but that makes for a fun hour, even if many of them were trying too hard in the Diary Room by about 15 percent. But it’s early and they haven’t relaxed into the experience yet.

And you can’t fake things like Jonathan Bennett’s facial expression when he saw Dina Lohan, which was brighter than the super blood wolf moon—and which was repeated when he saw The Mooch, and then again with nearly every person he greeted in the house.

It’s those kinds of moments that make Celebrity Big Brother the best Big Brother: the cast and the situations just manage to be light, fun, and genuine without the producers having to force things.

Of course, they still did.

The HOH challenge drags things down

Alas, the life started draining out of the episode at the HOH challenge.

First, Julie Chen Moonves popped up to introduce the producers’ latest attempt to convince us that they have created thoughtful game elements instead of just hurling shit against a wall.

Because “power pairs dominate pop culture,” Julie had the celebrities pair off and choose partners for the HOH challenge.” The two that weren’t picked—Kato and Eva Marie—got immunity, which, okay, fine.

The first challenge had beautiful set design—and so does the house, which is classy and shiny. Also, swings are fun, and so is the idea of transferring liquid from one person to another.

But it was surprisingly boring to watch, and didn’t seem difficult, it just seemed poorly designed, like this was the first time anyone tried it and it really needed some adjustments before it was played for real.

Sure, there were fun quips. Here’s Tom Green again: “We’re neck and neck with an Olympic athlete and the guy who survived the Cupcake Wars!”

But it just kind of dragged on until Ryan Lochte and Jonathan Bennett, among the few who actually figured out how to get their swings moving and were able to reach the spraying water and transfer it to each other.

Of course, there can only be one HOH, and after their win, Julie Chen Moonves revealed the premiere’s Big Twist, which was, as can be expected from Big Brother, fucking stupid.

Ryan Locthe and Jonathan Bennett won the challenge, and their prize was that one of them becomes HOH and the other gets nominated for eviction. Come again?

Is this supposed to incentivize them to not throw the competition? That’s the best idea I can come up after spending an hour watching Ryan Lochte attempt to form syllables. But that still doesn’t feel worth punishing a challenge winner like that.

This twist feels like one that is just random for the sake of being random, which I suppose is pretty much the ethos of Big “Expect the Unexpected Aren’t We Clever” Brother.

But I have a lot of hope for this season, mostly because of the cast.

Plus, last year’s Celebrity Big Brother started by giving Omarosa immunity—and unlike last year, this premiere was free of cameos by previous Big Brother houseguests, so that’s a win.

I’m looking forward to the ride. But first, would anyone like a sandwich? Sandwiches.