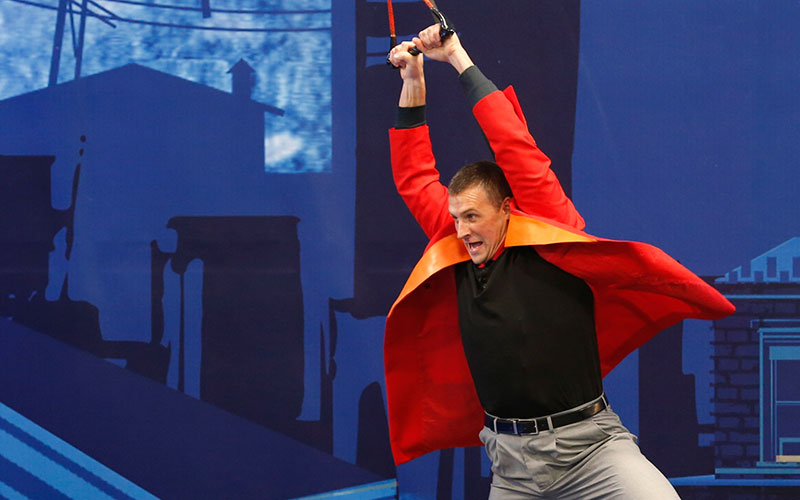 “This is so screwed up,” Jonathan Bennett said at the beginning of the second episode of Celebrity Big Brother 2. He was referring to the producers’ inane twist, introduced at the end of the premiere, that would give one challenge winner HOH, and put the other up for eviction.

I’ll let Joey Lawrence explain: “Not winning the first competition was a good thing.” There’s some incentive for wicked game play. (That grinding sound you hear in Los Angeles is the producers of this show thinking of the unexpected.)

The only good thing about this is that it did jumpstart alliances, though I think that probably would have happened anyway—except not for Joey, who doesn’t believe in alliances.

Jonathan and Ryan Lochte were teammates in the first challenge, so they’d bonded a little, and Jonathan also realized that the way to keep himself safe was to ensure that they had a post-challenge plan before the challenge.

And he knew he would be competing against an Olympic athlete who may be as brilliant as a pile of bricks, but can also knock over a pile of pretend bricks pretty quickly—which he did during the challenge.

The competition was considerably better than first, because it required some physical strength but also strategy. And it was fun to watch, which is more than I can say for the champagne swings.

Tangent: I really like this catwalk above the back yard, where the rest of the cast can look down and watch the challenge unfold.

Before Ryan won, he and Jonathan created a big alliance, and then four of them—Lolo, Ryan, Jonathan, Eva Marie—fragmented into a smaller, four-person alliance.

Tom Green, Anthony Scaramucci, and Kato Kaelin formed an alliance, which is such a bizarre combo and why these kinds of celebrity competition reality shows are just the best for creating collisions between universes that would otherwise never come into contact, at least not in this kind of public and weird way.

Also these kinds of reality shows are also the best for revealing who celebrities really are, and what they’re capable of—or not.

“Can he swim with the sharks, like I did in Washington?” The Mooch asked about Ryan Lochte, trying to be clever but indicating why he he wasn’t good enough to be the communication guy even for an administration that thrives on incompetence and chaos.

Because the producers had really done some thinkin’, they had the HOH, Ryan, nominate two people for eviction. Julie did the math for everyone: “making a total of three nominees.”

I understand why Jonathan Bennett resisted Ryan’s suggestion of putting Dina Lohan up: he’s known her for years, and didn’t want the wrath of Lindsay Lohan.

But how did those two come up with Tom Green as the third nominee? Why not Joey Lawrence, who doesn’t even believe in alliances and thus is an easy first vote? Are they worried about Tom? Did Tom hoard all the sandwiches? Why didn’t they tell their fellow alliance members, who are now suspicious?

I expect the Mooch is history on Friday; that may also just be my hope, because he’s no Omarosa, as a former White House staffer or as a reality show contestant.

The live feeds start tonight, so we will soon have more insight. The episodes have been kind of slow, and even though a week-one eviction is a faster pace than normal, having to wait until Friday for that is suddenly feeling like a long time.

I think that’s just because the first two hours could have easily been compressed into one hour, or at the very least should have been together as a two-hour premiere.

Celebrity Big Brother stretched one evening’s events into two episodes, but will—should! hopefully!—pick up the pace from here, especially when it starts with two evictions per week.