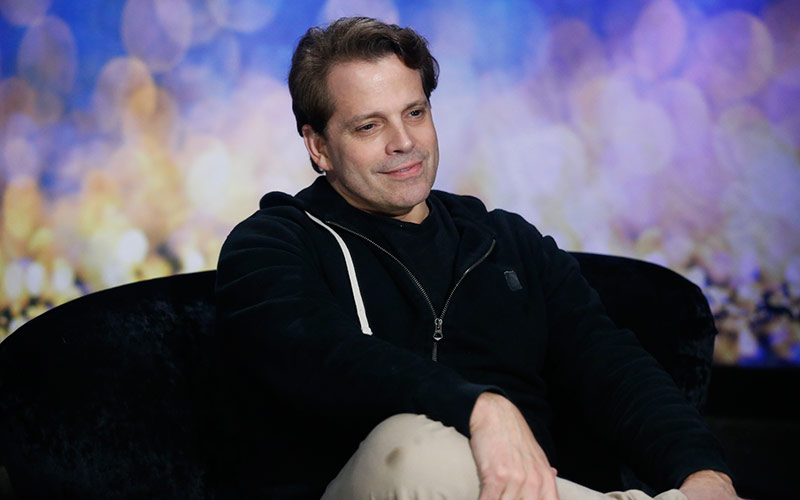 He was one of the two contestants nominated by Ryan Locthe for eviction, but left yesterday, long before the first vote. Why Scaramucci left is unclear, and while some conversation among the other contestants suggested he was some kind of mole, that doesn’t make much sense at this point.

Big Brother takes place in near real time, though the television episodes are behind the events in the house. The celebrities moved into the house last Wednesday, Jan. 16, and Scaramucci was in the house on Monday, when live feed watchers got access for 15 minutes at 2 p.m. ET.

But when the live feeds began last night at midnight ET, after the broadcast of the second episode on the west coast, Anthony was gone.

The live feed chronicler known as Hamsterwatch reported that “Tamar [Braxton] said something about ‘he tried it’ but no details came out. They commented that his picture on the wall wasn’t grayed out and they wondered if Ryan would have to nominate someone else.”

Later, the other contestants said, according to Hamsterwatch, that “they found out Anthony was a mole and ‘not a real player’ and he left.”

But as Hamsterwatch notes, “Anthony’s story doesn’t really add up as all his pre-show press indicated he was very much ready to play, and [the producers] would surely have told us if he was a mole or saboteur, plus he followed a bunch of us last year—odd thing to do for a two-episode cameo.”

There was no indication on the show that any of the contestants were moles or saboteurs, and Big Brother likes to tease these kinds of twists.

Plus, the veto competition that took place after Scaramucci left had a press conference-like theme, and Scaramucci was to have participated in that. Would the show would create an entire themed competition for a non-player who had a planned exit?

Scaramucci said his Big Brother strategy was ‘be myself’

There was no indication pre-game that he was anything other than a regular player. In a pre-game interview with CBS’ Pop, he said he’d “been watching a ton of Big Brother, and it’s addictive” and learned “not to overplay” his game.

And he also said this about being his authentic self:

“I’m going to have the same strategy I’ve had my entire life, which is I’m just going to be myself. What I’ve found in my life is when I’m just myself, some really good things happen, and sometimes some bad things happen. But the best thing about when bad things happen, you lean a lot about yourself. You know, when I got blown from The White House, I learned that I can take a punch because the media skewererd me pretty hard, and I wouldn’t be on Big Brother if I didn’t get blown from the White House. So for me, I’m just going to be myself and see what transpires.

Scaramucci said something similar in his pre-game interview with Entertainment Weekly:

“I just want to be myself, and so if America sees a version of me that is truly me, I’ll be super-happy. Having said that, what I would caution America is that, when you’re reading about people, or you’re watching sort of snippets on television about them, it may not be an accurate picture of who they really are.”

Last fall, Scaramucci partnered with reality show production company The Jay and Tony Show to develop and pitch his own reality series, which was inaccurately referred to as a talk show in other media. A sizzle reel was produced and was being shopped to networks.