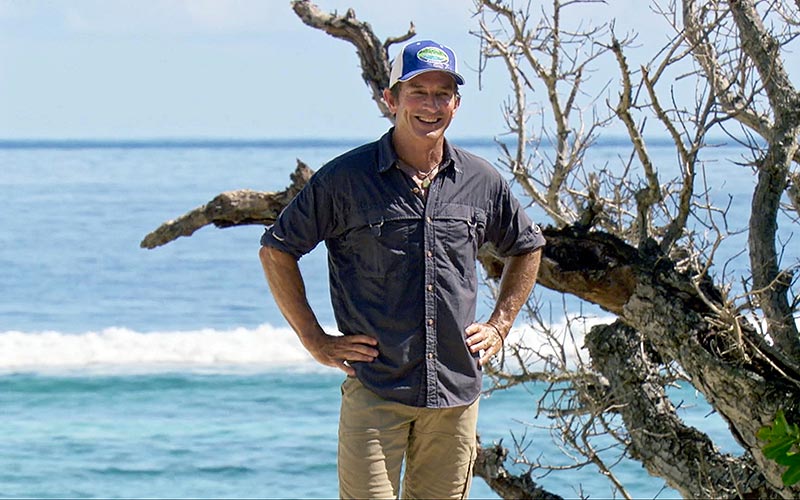 Jeff Probst during Survivor David vs. Goliath episode 10. (Image from Survivor via CBS)

Just one episode of Survivor David vs. Goliath remains, but it’s a long one: the two-hour (or more) finale followed by an hour-long (or less!) live reunion.

At the end of the reunion, Jeff Probst will tease next season of Survivor, which will be called Survivor Edge of Extinction and feature four returning contestants and a controversial twist. Here’s everything we know so far about it.

When will Survivor 38 debut?

The premiere will be only one hour long, which is too bad because the 90-minute premiere of Survivor David vs. Goliath really allowed the show to introduce the cast.

The season will conclude May 15 with its usual three-hour finale and reunion combo, and the following week, The Amazing Race 31 will take over Survivor’s timeslot.

When and where did it film?

Season 38 was the second of two back-to-back seasons to film last spring and summer. Its 39 days began after Survivor Ghost Island’s live reunion last May.

It was filmed in Fiji, which is Survivor’s permanent-for-now home.

Why Fiji? Among other reasons, the country gives Survivor a 45 percent rebate, meaning almost half of its costs are paid for by the government of Fiji.

Jeff Probst explains in this interview, which also goes into detail about how Survivor is produced.

True Dork Times’ calendar gathers information about how the season unfolded, though there aren’t many details yet—mostly speculation that assumes production took place during the entire month of June and into July.

The title of the season, Survivor Edge of Extinction, was first revealed by a now-deleted Reddit user, and confirmed by Inside Survivor’s Martin Holmes, who’d initially reported it was called “Island of Extinction.”

Extinction Island will be a thing, however, and both refer to this season’s insane twist: Every player voted out of the game will have the option of going to Extinction Island, where they’ll wait for two chances to get back in the game, at the merge and at the end.

What will they do on Extinction Island? Sit around, and perhaps behave terribly to encourage others to quit.

Anyone can leave Extinction Island whenever they want, but they can also stay for the length of the entire game, doing nothing except waiting. They won’t compete in challenges, or go to Tribal Council—at least not at first.

Eventually, after the merge, all of the players on Extinction Island will form the jury, meaning theoretically, there could be a 15-member jury and a final three. (There are a few spoilers if you want to know what possibly happens, and those spoilers include names of people.)

And yes, that means every single Survivor contestant might still be on the show on day 39.

Even with these details, there are a lot of questions, some of which might be answered during the Survivor David vs. Goliath finale, but most of which we probably won’t know much about until the game starts next spring:

Who are the returning players and new cast members?

There will be four players returning for Survivor 38: Edge of Extinction:

Those returnees were first reported by Inside Survivor’s Martin Holmes, who noted, “This would mark the fifth time Survivor has done a ‘captains’ style season but the first one to include four returnees.”

Returnees generally have a significant advantage in the game thanks to their previous experience—and for three of these returnees, they’ve played twice before.

They know what it’s like to be hungry, tired, and stressed out; they have practice on the challenges, which repeat from season to season; and they know how things work, from elements of the game to all of the behind-the-scenes production elements.

Plus, they’re minor celebrities—or perhaps major celebrities!—to the new players, and that often leads to an imbalance of power. The best example of that, of course, is when “Boston” Rob Mariano returning returned and the new players basically cleared a path for him to win Survivor Redemption Island.

There will be 18 cast members overall, so that means 14 newbies.

Of those 14, Inside Survivor has identified 10 players, six of whom are under the age of 25. More may be revealed tonight, or perhaps we’ll have to wait for the official cast announcement in early 2019.

The Survivor 38: Edge of Extinction preview

CBS aired a trailer for the new season at the end of the finale. In it, Jeff Probst said, “A new layer to the game will push them further than ever before.”