Skip to Content
Angelina Keeley during her Survivor David vs. Goliath episode 10 negotiation, which was ridiculed even by CBS. (Image by CBS Entertainment)

Angelina Cardona Keeley got what she wanted when she negotiated with Jeff Probst for more rice during Survivor David vs. Goliath’s episode 10. But she has also received varying degrees of joking, mocking, and ridicule, including from CBS and from me, about her negotiation.

And what was left out is significant.

What Angelina offered and why

On Thursday, Angelina posted several times to Twitter, detailing her negotiation. Some have read or even dismissed what she has to say as damage control, which is an understandable reaction.

But let’s not forget that what we’re responding to on screen is carefully edited, both for time and content. We see just a tiny fraction of what actually happens, and it’s presented in a way that tells a very specific version of the story: to maximize entertainment, or to present characters in ways that the producers want us to see them.

The episode included Angelina talking about her negotiation skills, which set me up to expect some kind of impressive, mind-blowing conversation in which she skillfully navigated around Jeff Probst and got more rice without giving anything up. What happened at the challenge seemed like the opposite of that: she offered a bunch of things, identified that as her lowest offer, and then accepted the first counter-offer.

So, at the very least, I think it’s worth listening to Angelina’s version—and listening to the people whose lives are edited and presented in that way to see what may have been excluded.

In the same way that I appreciated hearing Nick’s perspective on two votes he said he orchestrated, I appreciate Angelina sharing with us details about what happened.

First, she discusses her opening offer, which sounded insane to me, but Angelina points out how those things she offered didn’t have actual value to the tribe:

My starting offer was low, bc everything I offered upfront had little to no value to us: fishing gear (we caught 0 ? despite trying), the majority of the cooking supplies except a small & a large pan (everything else we didn’t use), the chairs (broken), sitting hammock (luxury)

The fact that Probst completely ignored her offer in his “counter” (and we’ll get to Probst’s role next) suggests he didn’t think they had value, either.

She also explains why she identified it as a lowball offer, which I made fun of:

The reason I acknowledged that it was a low starting offer after @JeffProbst said it was: because Jeff is a very smart guy and I wasn’t going to insult his intelligence by not acknowledging this to be true. I also didn’t want him to walk away from the negotiation.

Angelina next describes what the entire tribe agreed to give up—including more significant supplies and immunity:

Our negotiation ceiling (which was discussed and agreed to by the entire tribe): my starting offer + 2 tarps + all of our blankets and pillows + the main hammock + our raft + 3 individuals sit out of immunity.

And then Angelina addresses both what they got and why she counts that as a win for both her and the tribe:

The accepted offer: one individual immunity foregone (me), and we got to keep everything else. All our blankets, tarps, cooking supplies, fishing gear, etc. That’s a steal in my book. @JeffProbst has made people pay FAR more in the past. #Survivor

And if you think I was “bossy” for negotiating, consider these instead: “collaborative” (got buy in from the entire tribe), “proactive” (we were 1-2 days from being out of rice) and “risky” (could have put a target on my back but I navigated it the right way and came out on top).

In that last tweet, Angelina specifically mentions being called “bossy,” and there’s a reason for that: it’s how CBS described her.

As background, CBS’ social media has been mocked over the years, including by past contestants, because its posts are sometimes inane or inept—and so inept or inane that the posts have been attributed to interns, because people can’t imagine professionals screwing up that badly.

I appreciated this reply:

Pro tip from a fellow copywriter: delete this, do better.
1. You’re an official account inciting needless hate toward one of your own contestants.
2. There was nothing remotely “bossy” about Angelina last episode.
3. Your social media presence sucks. Hire someone else.

During the episode, CBS’ official Survivor Twitter account did not give any other players mocking nicknames. It definitely did not mock any men, though it did ask a question about Gabby, asking followers if she should stop crying or be more included.

Calling Angelina “bossy” is not just inaccurate, it labels her instead of focusing on her actions.

It’d be one thing to just ask how she did in the negotiation; instead, the CBS tweeter opted to use language that shames Angelina with a word frequently used in a sexist way.

The Economist sums it up well in this article:

“Women and men face double-standards. That this should show up in the language is no surprise. Men who put themselves forward at work are ‘assertive’, women who do the same are more often ‘pushy’ or ‘bossy’; men are ‘persistent’ whereas women are ‘nagging’; men are ‘frustrated’, women ‘upset’. A man has a lot to say; a woman is ‘chatty’. A man discusses the doings of his colleagues and rivals; a woman ‘gossips'”.

There’s no reason for CBS to use such lazy words—especially since the only person acting in any way “bossy” was the show’s actual boss. 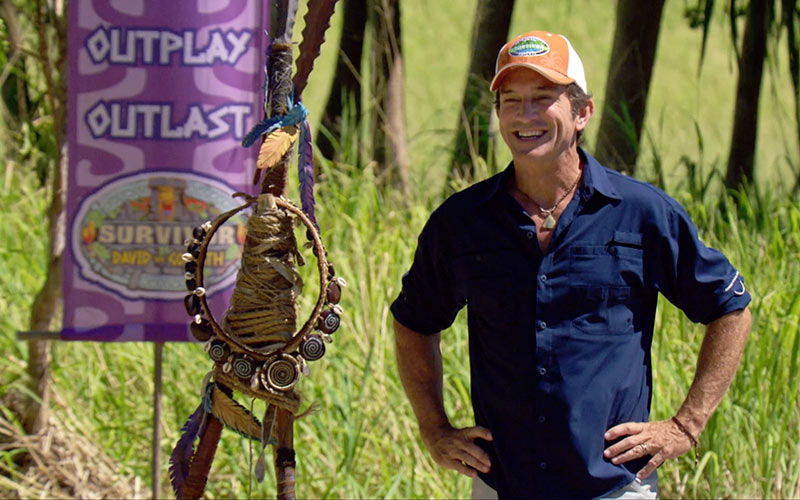 Australian Survivor season 3 contestant Nick Iadanza ‏points out the obvious about the negotiation: “intel about what you are willing to give up is on camera and TOLD TO THE OTHER PARTY BEFORE YOU ARRIVE.”

The other party, of course, is Jeff Probst. He’s not just the host, but also the showrunner and executive producer in charge of the entire production.

Just as he knows what to ask about at Tribal Council, he also knows what to expect in moments like this, whether someone is quitting the game or asking for more rice.

In addition, as I wrote in my recap, Probst and the producers decreased the ration of rice players receive last season in order to force a negotiation moment like this. (Probst explains why here. Since that was for Ghost Island, it’s possible the show reverted to a normal ration of rice this season.)

And if you need evidence that Probst knew what the price was before the “negotiation” even started, here is what he told EW‘s Dalton Ross:

“I really appreciated that they spent time deciding how to approach the situation and Angelina was well-spoken in her opening offer. The reason we countered with immunity was situational. Eating more than the appropriate ration of rice is really pushing the rules of the game. We obviously can’t let the players starve, so they know we have to give them more rice. So, the only way a trade of goods made sense was for me to take their entire shelter and it didn’t feel right given how much they had been through already this season.

So, the next best counter was immunity. For me, it was more the point of it, rather than the inherent risk to one player.  Immunity is the most important thing in the game. Who is willing to give it up? Obviously, the other players could have just agreed to not vote Angelina out, make the trade, take the rice and that would make it easy.  But someone still has to agree to give it up.  They have to agree to go to Tribal Council without security. It’s still a risk. I think Angelina was absolutely doing it to be seen in a favorable light from her tribe, but that’s what anyone would be doing who made the decision to sacrifice for the others. You ask the more important question: Will it work for her or against her? And I will say to future players, don’t expect a similar trade if this were to happen again!”

Guess who has the most power in deciding whether or not it happens again? Hint: It’s not Angelina.