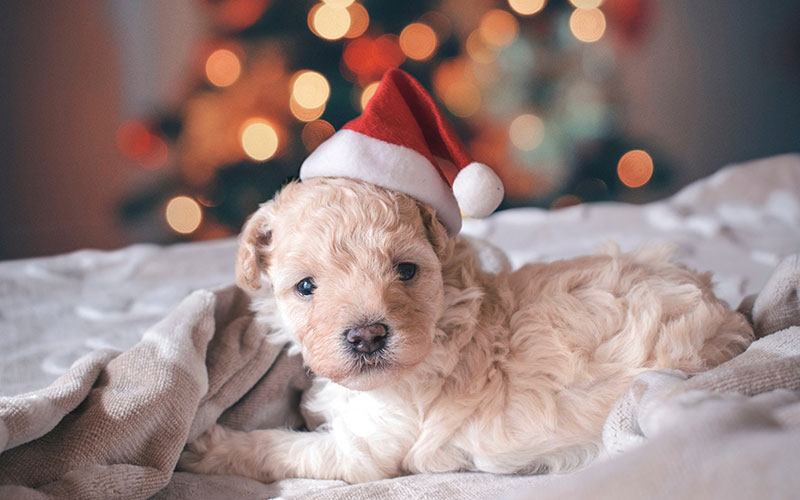 A puppy with a Santa hat. (Photo by Rhaúl V. Alva/Unsplash)

Last month, I asked for your feedback, and hundreds of you responded. I’ve read every response since then, and I appreciate everything, from the extremely kind words to the thoughtful criticism, and I especially appreciate your time.

Some of the notes made me laugh, many made me think, and all were helpful. You’ve given me a lot of valuable feedback. For example:

There were a few things that came up more than once that I thought I should address directly, both to clear up some misconceptions and to let you know the reasons why things are the way they are.

Let’s start with special thanks to those of you who responded to the survey even though it was below a photo of a cat. The photo of the puppy above is for you, especially the person who wrote “NO CATS! I HATE CATS!”

That’s actually by design—and a product of previous feedback, though I’ve made a recent change as a result of your more-recent feedback to help make things clearer. Let me explain!

One frequent request in the past has been for a simplified, reverse-chronological list of stories, with summaries, like blogs used to be back when they were blogs 10 or 15 years ago (crazy!). That’s now part of the home page.

But the problem with that kind of list alone is that stories I spend hours, days, or even weeks writing and reporting can quickly fall off the front page and disappear. Also, sometimes a story I wrote months ago can have new relevance.

That’s why I created—well, copied what other publications do on their web sites—a featured stories section. It’s there to highlight certain stories. That includes the most-timely breaking news, evergreen reviews, or longer interviews or feature stories.

I want to make sure that everyone—frequent visitors and people who may stop by a few times a week—see those important and/or in-depth stories.

Another part of the design includes a “from the archives” box, which only makes occasional appearances. For example, over Thanksgiving week, I included reviews from the archives of shows you might want to binge-watch during the holiday. Previously, I included the box on the day of Survivor David vs. Goliath’s premiere, so you could refresh your memory about the cast and twists. That’s clearly labeled as something like “from the archives.”

For those of you who are regular visitors—and I assume that most of you who answered the survey are!—I understand how it’s weird to see older stories before newer ones.

That’s especially true on mobile devices, where you have to scroll past four to seven stories before you get to the aforementioned reverse-chronological list.

So, a few weeks ago, I adjusted based on that feedback. There’s now a label indicating that the top section is feature stories, and a link to jump directly to the “latest stories.”

That link is for you, regular readers: a quick tap of your finger or a click of your mouse and you’ll jump right to the list of most-recent stories in reverse-chronological order, just like the early days, and skip all of the featured story stuff.

As always, I welcome your feedback on that. I’ll keep evolving and changing the design to improve it.

It might surprise you to learn that I do proofread—and spell check! And yet I still miss typos, which does not surprise me.

First, I don’t have a copy editor or an editor to check my work and notice the things I missed.

Second, I’m probably seeing what I thought I wrote, instead of what I did write. Sometimes, I will come across an older post and see a glaring error, and I can’t believe I missed it. But I did.

That may be in part because I write and edit this site on a screen. But that means I’m not really reading: When people read on screens, they read fewer than 30 percent of the actual words. Instead, our eyes scan text, skipping over words and phrases. I’m sure that affects my editing.

So, while I do my absolute best to have clean copy and the best writing possible, errors will still occur. I’m human and imperfect and often working fast in an imperfect medium. (There may even be typos here! Ugh!)

That’s why I appreciate those of you who let me know about typos you notice (you can always send me a quick e-mail). As embarrassing as they are, I’d rather know and fix it than have it live out there forever.

A few people commented that there should be “less opinion” on reality blurred. I thought this worthy of addressing, because I’m worried that you’re in for a heap of disappointment.

After all, I’m a TV critic and member of the Television Critics Association who, in 2000, created a blog to be a home for my opinions on reality television.

When I created reality blurred (read its origin story), there were few blogs about topics (i.e. reality TV). Instead, most were about their creators, whether the blogs were online journals or a collection of links to things their creators found interesting.

But what blogs all had in common was that they were personal and had a clear point of view, and shared their writers’ opinions, thoughts, and ideas about the world. That’s what I loved about them, whether or not I agreed with the writer.

That said, as someone who’s been a journalist since I first discovered journalism in high school, I’m also committed to fair and accurate reporting—and to correcting errors when I do make mistakes or get things wrong.

What you get here is a mix of both factual information and my thoughts, ideas, and opinions about that information. Some stories are much more of one than the other, but I trust you to be able to discern the difference.

So, you should read my stuff if you want to learn about reality TV filtered through my perspective. If by “less opinion” you meant “less opinion about things I disagree with,” well, that’s something I can’t help you with.

But just as I appreciated the feedback in the survey, I appreciate those of you who disagree with me, leading to friendly and stimulating debate and conversation about the television we love so much. Thanks again for that, and for your answers.