Skip to Content
The cast of Marriage Boot Camp: Hip Hop Edition, which airs in early 2019. (Photo by WE tv)

Then, seasons 3 to 14 cast people from other reality TV shows, and it became Marriage Boot Camp: Reality Stars.

Now, for season 14, the show is dropping the “reality stars” subhead so it can offer relationship help to a group of hip-hop artists—who are mostly all reality stars.

Marriage Boot Camp: Hip Hop Edition promises, according to a press release, that “couples from hip hop’s elite will take a break from their lavish lifestyles of champagne, fancy cars and adoring fans to put the spotlight back on their relationships” on the series, which also helps put a spotlight on reality stars desperate for more spotlight and/or work.

Along with its new focus, the show is also moving from its typical Friday night timeslot to a new home.

Marriage Boot Camp: Hip Hop Edition will air Thursdays at 10 starting on Jan. 10, following episodes of another reality show with hip-hop artists among its cast members, Growing Up Hip Hop.

Dr. Ish Major and Dr. Venus “Dr. V” Nicolino are both returning, having taken over the role as counselors/hosts from Jim and Elizabeth Carroll starting with season eight. 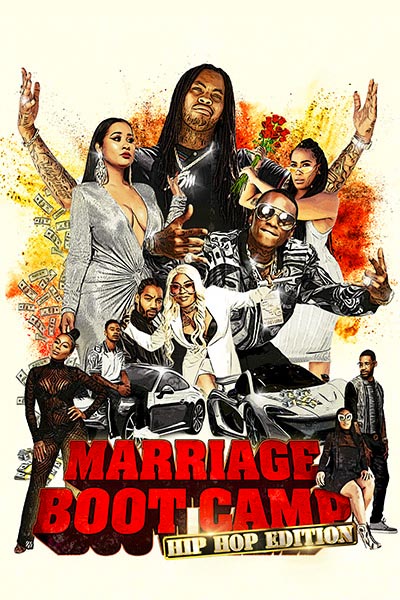 WE tv promises that the two doctors will be “upping their therapy game by pulling these couples straight outta hip hop and straight into the toughest two weeks they will endure to salvage their toxic relationships.”

Among the challenges will be appearing in Divorce Court in front of its star, judge Lynn Toler.

Watch a preview of the season, followed by a list of the cast members and their relationship woes.

Here are the cast members for Marriage Boot Camp season 14; the reality shows they’ve appeared on; and WE tv’s descriptions of their issues, which are in quotation marks:

Soulja Boy and Nia Riley (Love & Hip Hop: Hollywood). “Soulja wants to get married but Nia struggles to free herself from his control while caught in the crossfire of his vicious social media attacks.”

Waka Flocka and Tammy Rivera (Love & Hip Hop: Atlanta). They “may look like everything’s all gucci, but salacious rumors of infidelity say otherwise.”

Lil’ Mo and Karl Dargan (R&B Divas: Los Angeles, Love & Hip Hop: New York). “Allegedly, Karl has been unfaithful in their marriage while Mo, the breadwinner, is ready to put all the side chicks on full blast.”

Jessica Dime and Shawne Williams (Love & Hip Hop: Atlanta). “Shawne has put a ring on it, but has yet to set a wedding date in 2 years!”

Lil’ Fizz and Tiffany Campbell (Love & Hip Hop: Hollywood). They “make a last-ditch effort to reignite the spark before the love completely fizzles out! But Tiffany isn’t the only ex Fizz will bump bump bump into!”