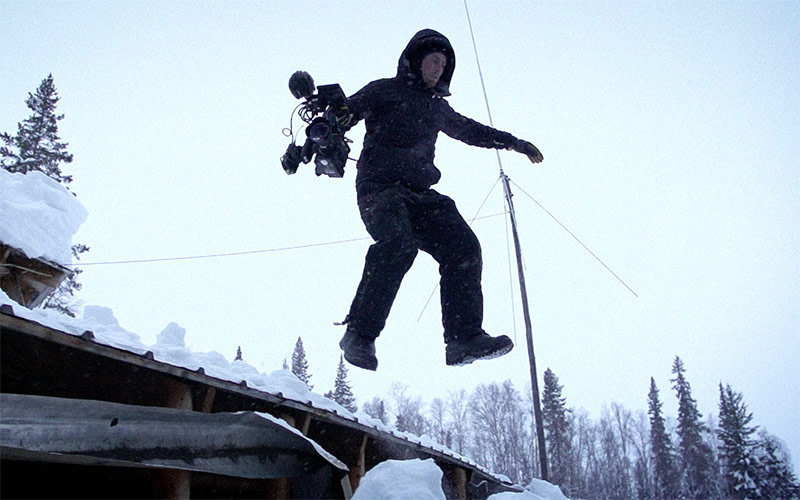 A camera operator jumps off a roof during the behind-the-scenes special Life Behind Life Below Zero.

National Geographic Channel’s Life Below Zero airs its 100th episode tomorrow, Jan. 1, at 8 p.m. after a day-long marathon of episodes from its 11 seasons. The show first premiered in 2013 and has won three of the six Emmys it’s been nominated for.

In this edition of The Confessional, Joseph Litzinger—its showrunner since season two, whose previous credits include The Challenge and Hell’s Kitchen—writes about producing the show in less-than-ideal environments.

Over the years, I get asked two questions the most about my time on Life Below Zero. First, “How the hell do the crews get those shots?” and second, “Aren’t you bored working on the same show for so long?”

Life behind Life Below Zero can be extremely challenging for our field crews.

Documenting the incredible lives of those who choose to live in the wild and in below-zero temperatures is no easy feat.

We have had a few instances of frostbite and many broken bones; close calls with bears and other predators; and situations where crew members have fallen through icy rivers and off moving boats or slid down mountainous terrain.

It really takes a special breed of person to leave your life behind and go live off the grid for several weeks at a time to film a TV show.

Filming in Alaskan winter conditions means it’s often too cold to use outhouses, so the crew must resort to using a bucket in a corner to take care of business.

Sometimes four crew members have to bunk up for weeks at a time in arctic oven tents, which are about 10 feet by 10 feet. There are times where it’s so cold that the LCD screens on the cameras freeze, and the crew has to just take their best guess on what footage they are getting.

Oftentimes, battery management is the bane of their existence, and depending on the conditions, they have to change the camera batteries every 15 minutes. Over the years they have learned to keep batteries physically taped to their bodies to keep them warm and ready to get the shot.

There have been times when it’s too cold for gasoline to ignite (which happens when temps reach below 50).

One of our coldest days was filming in a blizzard with temps as low as -100 with wind chill. Imagine trying to focus the lens or adjust camera buttons wearing three layers of gloves!

Not only do they somehow manage to capture the moment in those conditions, they manage to capture it with our c300’s, with GoPros, with A7S SlowMo cameras, with a slider for specialty and, if weather allows it, a drone!

Bridging the gap between filming and editing

My main objective since taking over as showrunner in season two was keeping the show moving in a cutting-edge direction.

One of the many lessons in making great TV—which the original executive producer of the show, Travis Shakespeare, taught me—is that a key to innovation is encouraging creativity.

I took that lesson to heart and almost every day I ask myself, “Am I encouraging the team to be creative?”

I feel strongly that it’s that creative process that keeps this show feeling fresh after so many episodes. That creativity and constant drive to push the boundaries of the genre come from motivating a team to honor their own creative impulses and nurturing the innovation and camaraderie.

Producers, editors, cinematographers, and crew need freedom of thought and creative license to carry out their ideas and tell a good story.

On shows I’ve worked on before, there was a “we’ll fix it in post” mentality, but one of the things we tried hard to do early on was bridge the gap between post-production and the field in order to not get complacent.

I specifically remember telling Joe “Boots” Parker, our original director of photography who helped set the unique look for the show, that if he took the time to shoot specialty B-roll, I would personally watch every minute of footage.

At the cost of my nights and weekends for a many months, I did just that. Did I find some hidden gold in those shots!

Even if I no longer have the time to watch every piece of footage from the field, someone still puts eyes on every frame in order to find those award-winning shots. 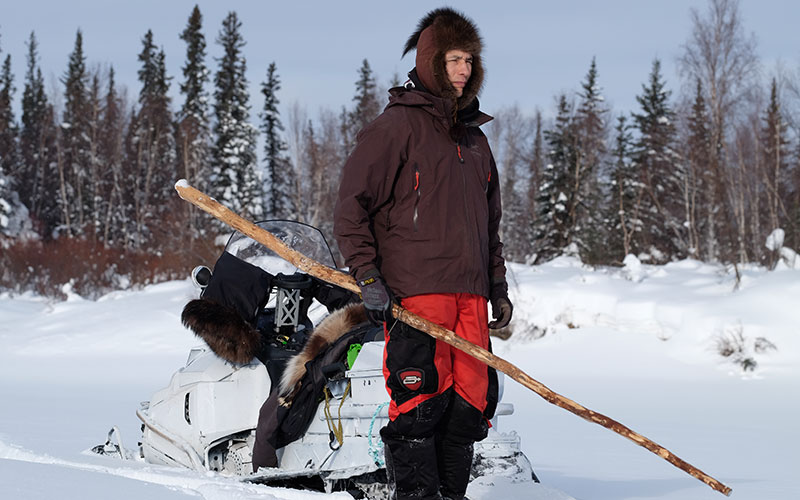 Six years later, we have systems and plans in place that make the show efficient and cost effective, but the challenge is to constantly alter the blueprint in order to push the boundaries of what we’ve created thus far.

The key is to listen to everyone’s ideas and aspirations and to inspire them try something different. We constantly work with the pieces of this puzzle to create something original that we’re all passionate about making.

As a storyteller and documentarian, working under BBC Studios (the production company) and National Geographic (the network) has been a dream come true.

The attention to detail and honesty they desire is refreshing and continues to push me to make this show in a way that is different from other reality television.

Passion for Life Below Zero is what has kept me and the crew engaged and excited to be working on this show and what I think has kept the audience interested after so many years.

Joseph Litzinger is currently the show runner and executive producer of the Emmy-winning series Life Below Zero for National Geographic Television and BBC Studios. He graduated from the University of Texas at Austin with a degree in Sociology and a minor in American Sign Language. He then moved to Los Angeles to make documentaries and pursue his dream of traveling the world, looking for unique stories to tell. He's been fortunate enough to do just that. He is credited on hundreds of hours of nonfiction programming and has produced television for countless networks, including History Channel, Discovery, National Geographic, MTV, CMT, NBC, and Showtime. Prior to his career as a producer, Joe worked as a secret undercover food taster for Jack in the Box, earned his “Mouseters” and “Ducktorate” at Walt Disney University, and was the personal smoothie maker for the Houston Rockets.