Another Survivor David vs. Goliath player has been interviewed while still on the show, a break from tradition that gives us a lot of wonderful insight into this season—a season that is definitely one of the best in recent years, and continually solidifying its place as one of the all-time great seasons.

Her responses are thoughtful and detailed, and—like Nick’s insight about the strategy behind two blindsides—is a real treat to read for someone still in the game.

Gabby on her crying—and responses to it 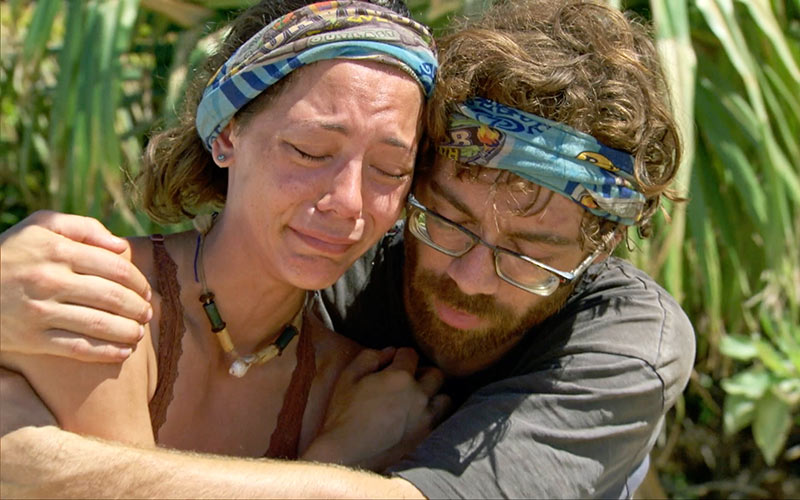 On Twitter, Gabby’s background image is a photo of her crying in one of this season’s episodes, and her bio says that she is the “Crying girl in glasses on Survivor 37.”

That’s a reference to the fact that her tears have received a lot of air time, though in her interview with Josh Wigler, Gabby amusingly points out “I did not cry in episodes three, five, eight, nine or eleven.”

First, for those conspiracy theorists who like to make up stories about what they’re seeing on TV, Gabby says that she is not pretending to cry:

“As flattered as I am by all the fans who think that I have such magnificent acting chops, I assure you that I did high school theater and am not a great actor, and also, I believe being able to cry that convincingly on demand would actually make me a psychopath.

Instead, I want to propose another way to frame my tears: they can be both genuine and strategic. I knew going into the game that I am a person who cries easily — when I’m sad, angry or even happy. I even joked about it in my preseason self-comparison to Dawn, and in my interview with you for First One Out. I think in Survivor, you have to figure out how to work with your own natural personality quirks. So if I know I’m going to cry because I can’t control my body’s natural reaction, what can I do? I can use it as a way to connect with people. Vulnerability is a powerful bonding mechanism.”

She goes on to give several examples about how “pathos is a powerful rhetorical device” and helped her in specific interactions with other players.

But she also acknowledges that “Sometimes, the tears don’t serve a real purpose and I just have to remind the fans that I’m human.”

When Elizabeth was voted out, Gabby said that her “tears weren’t fake, or me trying to cover up the Strike Force. It was a real human moment wanting to defend someone that I cared about. You can love or hate me for it, but I think people in my real life appreciate that I am an empathetic friend who will always stand up for them.”

“Hot take. You can be emotional & vulnerable in private, and also calm & competent when you have to perform a task. Keep that in mind when you call women overly emotional and assume that their personal life and disposition means they can’t do their work in a professional setting.”

In her THR interview, Gabby further addressed those who think crying shows weakness:

“Lastly, I want to ask the people who are so incensed by my crying why it bothers them so much. If you’ve been told in your life that it’s weak to cry, I have compassion for you and hope you can find a healthy way to express your emotions that works for you. Emotions are powerful and wonderful and make us human. I hope that people who have walls up can someday find the strength to be vulnerable, as I think you’ll find it brings love, joy and deep relationships into your life.” 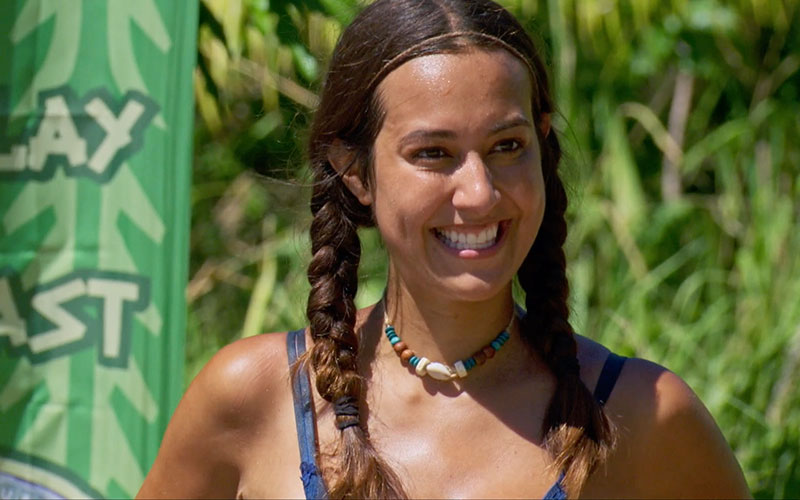 Angelina Keeley during her Survivor David vs. Goliath episode 10 negotiation, which was ridiculed even by CBS. (Image by CBS Entertainment)

There was a lot more to the story of Angelina’s negotiation with Jeff Probst for more rice, and Gabby confirmed parts of Angelina’s version, including that the tribe discussed it and that Angelina led the charge:

“She had brought it up many times prior at camp and called tribe meetings to decide how we would negotiate. A lot of us recognized that we did need more rice, but no one really wanted to take the lead and expend the brainpower to itemize our entire camp and rice supply.”

Gabby said that Christian and Angelina spent time about an hour at camp working out the math for how long their remaining rice would last.

In addition, Gabby said that Angelina’s immunity sacrifice was appreciated, but also transparent in revealing Angelina’s place in the game:

“When she volunteered to give up immunity, we were all very grateful. For me? It made me laugh a little. She was supposed to be the decoy name, remember? So why would she sit out if she was in danger?” 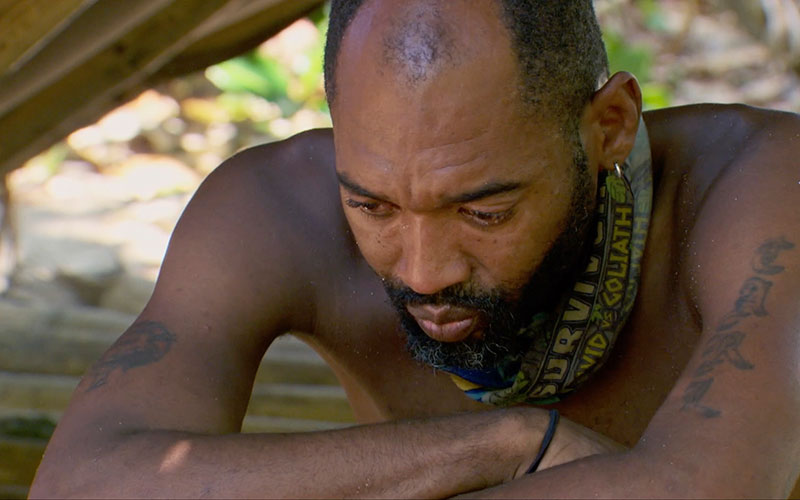 Carl Boudreaux in a low moment after losing the first reward challenge on Survivor David vs. Goliath episode 10. (Image by CBS)

Gabby led the way in booting Carl, blindsiding one of her own original tribemates, but that process took two episodes for several reasons.

It started with the blindside of John—a plan that excluded Gabby, as she told Josh Wigler:

“After that blindside, I acted cool, but inside I felt like I was getting left behind in the game. […] My alliance had my back, which I appreciated, but that whole John vote was a wake-up call for me.

We did bond when we all shared our… okay, their advantages, which was one of my favorite moments of the whole game. But my not having an advantage just made me even more cognizant of the fact that out of the five of us, the jury would respect my game the least.”

Gabby said that her priorities did not include a David alliance to the end: “for my personal end game, David strong did not make sense,” she said. “I felt I was at the bottom of the Davids, so going to the final five with them just means I come in fifth place, or am a final three goat.”

Carl wanted to keep the original David tribe together, which contributed to making him a target.

Also, Gabby said that, while she and Carl were close friends, “strategically, we didn’t click. I would want to talk through the possible scenarios, like a rock draw at the final ten, or looking forward to the next vote, and he would say I was overthinking things. He is very straightforward and I’m very cerebral, so we didn’t vibe like that.”

While Gabby is getting more attention for her emotional expression, she says that Carl was just as emotional, but in a less-obvious way:

“I love Carl, but Carl is an emotional player. One of my favorite phrases is, ‘When you point your finger, there are three fingers pointing back at you.’ So I believe when Carl calls me emotional, it’s because he is emotional. The difference between me and Carl is that my emotions are outward, whereas he bottles his up and lets them out in private. So he saw me as weak because I couldn’t hold it in, and I saw him as hard to work with because he was stubborn.”

Gabby did click with Christian, of course, and they both agreed that Carl had to go, which was an example of “how in sync our brains were,” Gabby said.

There were two reasons why the Carl vote didn’t happen in the first of the two back-to-back episodes, when Alec was voted out instead:

Gabby says that “Everyone had their own reasons why voting for Carl was good for their game, and it all came together at the perfect time.” 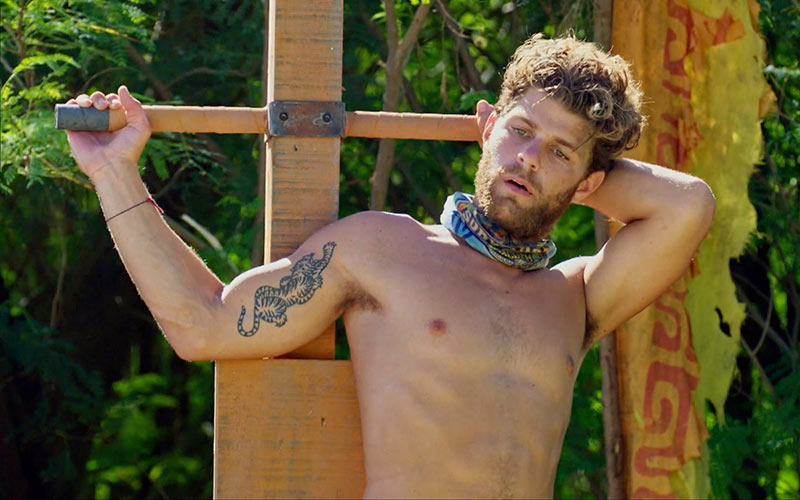 Alec Merlino during the Survivor David vs. Goliath episode 10 immunity challenge, suffering the effects of five hours of endurance and/or listening to Christian. (Image by CBS)

There was much more to the endurance challenge than we saw on TV—of course there was, since it lasted 5.5 hours, and an episode of Survivor is 43 minutes long.

Gabby said that the challenge “was weirdly a bonding experience for all of us, probably because we were forced to hang out for six hours and couldn’t talk about strategy,” and that time included “several games of 20 questions.”

It also included Christian talking nonstop, which was included in a comedically edited sequence that showed hours passing as Christian kept going.

It turns out that Christian actually started talking—to try to annoy Alec—long before Gabby dropped out of the competition. But he stopped, because she asked:

“At one point, he started telling a story about a robot and it got… anatomical. I was still in the challenge, so I said to him, ‘Christian, I love you man, but I need you to shut up.'”

That sounds like a wonderful moment, but what I really wish CBS would put online is the cast’s conversation with Jeff Probst, which ranged from how Probst works out to Survivor itself. Gabby said:

“Christian is a Survivor superfan, so he would pester Jeff about previous seasons, his favorite players, challenges he wanted brought back, or whatever. Eventually the whole sit-out bench engaged in the Jeff interrogation too, asking him questions ranging from whether they’ll bring the Survivor auction back, to what Jeff’s workout routine was. Jeff was such a good sport and it speaks volumes for what a great host he is — as much as we were suffering in the sun, so was he, on his feet for almost six hours!”

Read the full interview with Gabby here, and also read Nick’s interview about his strategy.