Skip to Content
Ke'Shawn Kumsa (center), one of the Oak Park High School students followed for America to Me (Photo by Starz)

During filming of America to Me, which follows students, teachers, and staff at Oak Park and River Forest High School outside of Chicago, one of its assistant principals, Chala Holland, left for a job as a principal at another school.

Oak Park and River Forest is a school that identifies “its racial diversity” as “one of the unique aspects,” while recognizing that that “white students, as a group, [are] outperforming students of color,” commonly known as the achievement gap. The school says it is “intensely focused on eliminating these differences.”

Reflecting on her time there, Holland says, “Some of the things that I experience as an administrator in this building, I feel more affinity to a black girl in a classroom than other administrators. I guess I will to say to the next person that has this job, that, um…”

She pauses and a tear falls down her face.

“This is me,” she says, and takes a moment before continuing. “Our kids, our faculty and staff, anyone that walks into this building deserves to come into a space where they can bring all of who they are, authentically.”

They may not have that at OPRF high school—or in the United States of America—but those who have shared their lives and experience on camera as part of America to Me bring their authentic selves to every frame, creating an indelible portrait of the way our lives can’t be separated from race, class, sex, and gender.

America to Me breaks the fourth wall immediately

One of America To Me’s many smart choices is its willingness to break the fourth wall, and that happens from the opening moments of the first episode.

The show immediately addresses its own presence in the community, and the presence of cameras in high school students’ lives.

In his narration—which is stilted and one of the series weak spots, feeling like it was meant to be dubbed over by someone else—producer and director Steve James says that the principal and superintendent wouldn’t agree to be interviewed: “They don’t want us there.”

He cuts to an interview with Dr. Jackie Moore, a school board member, who says,

“They don’t want you all anywhere, so—no, seriously! If you’re feeling as though you can’t be honest, or you’re afraid to say what you’re feeling because there’s a camera there, and we’re talking about race, what camera’s in your head when you’re going through your day? Something is happening that makes this such a hard topic. It’s not just a documentary.”

In a later episode, students joke about how the show will frame them, perhaps locking them into familiar TV stereotypes of black kids by opening with images of them rapping and then selling drugs.

Cameras follow people at home and at school, in class and outside of class. In the same way that race is at the center of the series but not always the focus, the students are at the center but the series gives equal attention to parents and teachers, who share their stories and concerns.

The teachers, for instance, talk with a kind of raw honesty about their students in a way that borders on questionable—Can they really say that?—but gives clear insight into the challenges they face as educators trying to chip away at the problems they’ve inherited, whether those problems are systemic or individual.

So much vulnerability, so much insight

The vulnerability in America to Me is unflinching and admirable, and it comes from everyone from school security guards to parents, teachers to administrators.

They show us and tells us about the challenges of classroom management; the differences between the way white and black kids treat each other, and the staff and teachers; how people perform behaviors that they think others expect; how resources are allocated; how disconnected people in power are from reality; students’ anxieties, academic and social and physical.

These are 10 episodes of extraordinary reality television—even if their director, Steve James, who directed the acclaimed documentary Hoop Dreams, calls it “a film.” Um, no. I don’t want to watch a 10-hour movie. I do want to watch 10 hours of immersion in people’s lives to learn more about what I don’t know.

The series aired this fall on Starz, and will be on demand for subscribers until July 31, 2019.

I wish it was more accessible; there is extraordinary irony that a show that explores privilege is limited to those privileged enough to afford a subscription to a premium cable network.

You can watch for free, though, on Amazon, with a free 7-day Starz trial, or buy it for $13 on iTunes. But that’s not quite the same as the series airing on PBS. 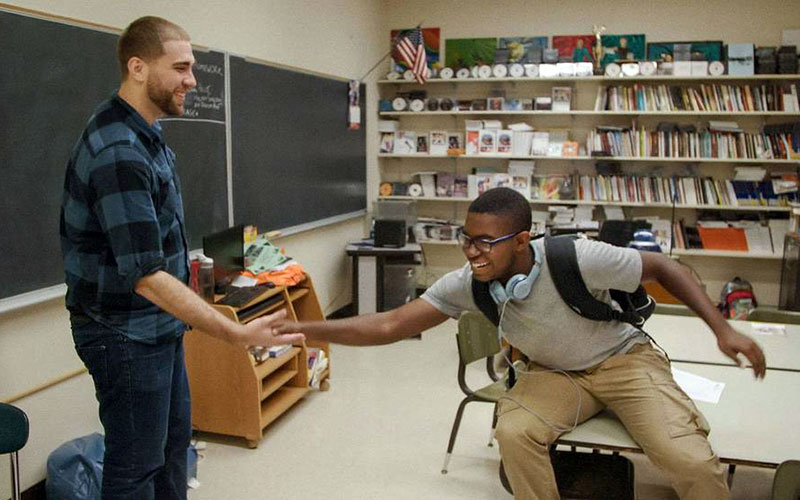 Charles Donalson (right), one of the stars of America to Me and a student at Oak Park and River Forest High School. (Photo by Starz)

My husband, who used to teach high school, watched with me and called America to Me “a really uncomfortable mirror. I wonder how much of that kind of stuff I was guilty of, but didn’t recognize or want to recognize. How much was I missing?” he asked.

I think that’s one of the reasons why people resist even just watching this kind of show, never mind trying to talk about and address these subjects: it’s uncomfortable.

I think that’s also one of the reasons why it took me almost four months to write about America to Me: I was worried I couldn’t begin to do it justice, to capture it in words.

And you know what? I can’t. But I can write these words: Watch it. Think about it. Talk about it. Do something in your own life to address what concerns you.

Most of us are hopefully not actually responsible for racism, sexism, classism, and homophobia, but we are responsible for our own lives, and what we choose to do every single day.

Do we choose to perpetuate those things? Do we just follow the scripts that our culture has given us? Is a casual, harmless joke really harmless? What happens if we pay attention to our own privilege and advantages?

In August, at a press conference I attended as part of the Television Critics Association press tour, one of the students in the show, Charles Donalson, was on stage. He instantly charmed everyone.

“I didn’t take it seriously. I went around the school telling people that the cameras was really for, you all know the show Cheaters,” he said—and one of those moments is actually in the first episode.

But later, in his answer to a question about being filmed for America to Me, Charles said:

“The Austin community right next to Oak Park is so much more poor. It’s so much more disadvantaged and not as privileged as ours. And the only thing that separates us is literally a street. Like, those are my friends that are coming over that aren’t allowed the same privileges as me, just because their parents couldn’t afford to live in this neighborhood.

I want each and every one of you all to take away from this … not that these are stories of black power, stories of black struggle. That’s cool. We’ve seen that. But start giving us stuff where we ain’t gotta struggle no more. All of you all in here have the power. Jesus Christ, do you all know how much food there is out there?”

Starz had paid for a massive buffet and open bar for breakfast that morning, and had rented expensive-looking tables and chairs instead of the standard hotel ballroom furniture. There were bags of expensive swag being handed out.

The crowd laughed. But Charles wasn’t joking this time:

“No, you all are laughing at me. I’m being dead serious right now. Do you all know how much food it is out there? You all see all this stuff? When I was in here yesterday, and I’m watching all the money it probably take to just set up this room, and you—like there is literally situations like this where we’re hoarding wealth, and that’s the same thing that Oak Park is doing. That’s the same thing this entire country is doing.

I know that by praising the show and encouraging you to watch, I’m just giving light—shining my own flashlight on the bright spotlight that is America to Me.

Just watching may not actually be helping anything, but hopefully it will inspire action, thanks to Charles and all of those in the series who’ve shown us what America is to them.