Alex Guarnaschelli and Carla Hall are familiar Food Network competition judges, and Giada De Laurentiis has co-hosted Food Network Star for years now, never mind hosting her own show. Their talent and expertise, as chefs and hosts, is clear.

So it’s no surprise that the three of them together—on Food Network’s recently concluded three-part special series Ultimate Thanksgiving Challenge—made for a thoroughly charming competition.

I’ve written recently about how Food Network’s shows are increasingly formulaic, and this is no exception: celebrity chef host, panel of judges from other Food Network shows, a studio with a pantry and cooking stations, and some contestants.

It’s pretty much exactly the same as all of the other Food Network Challenge shows, but it’s also a perfect example of the formula working.

(For an example of the formula not working, see Martha Stewart hosting the Macy’s Thanksgiving Cake Spectacular special, which was flatter than a cake run over by the Tom Turkey float and trampled by a dozen high school marching bands.)

There were just five contestants, so each of them got a lot of focus and attention, and slightly more depth than the average episode of Chopped.

In six different challenges, two per episode, they had to transform traditional Thanksgiving dishes, and the producers found six ways to do this without making it feel repetitive.

All of this took place in a warmer, more inviting set than usual. I think the faux windows with curtains really helped, making it feel more like a home than a studio.

But what really brought the warmth, besides a pool of talented, likable contestants—and two perfect finalists—were the judges. 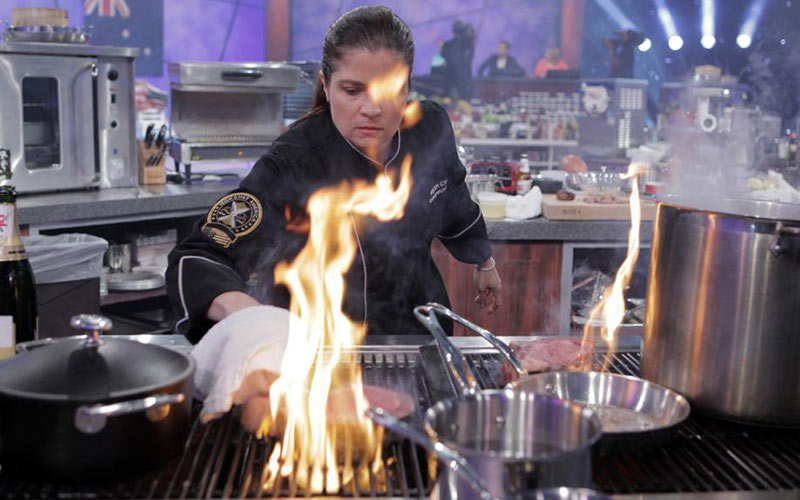 Carla and Alex are both witty and smart judges who are equally demanding and empathetic. They know what’s working and what isn’t, and describe it in a way that just makes everyone nod, because their authority is clear.

They both also know what it’s like on the other side of the judges’ table.

Alex is an Iron Chef who won the title after competing several times on The Next Iron Chef, and Carla was a chef who came to food TV through two seasons of Top Chef.

Together with Giada, the three of them just clicked. It felt like they were having a great time—even just watching the contestants, which can sometimes seem like it’s boring judges on other competitions (probably because it is boring!).

Food Network Star season 14 co-winner Christian Petroni was the other judge, and he fit in well, though he isn’t yet the star that the other three are.

Having Giada at the help kept everything efficient but warm and friendly: She interacted with the judges and contestants, and moved the show along effortlessly.

As much as I enjoyed Ultimate Thanksgiving Challenge, and wish it wasn’t over already, three episodes was made for a nice, compact season: it’s easy to get to know all the contestants and appreciate their work and the show itself.

Although it has concluded, and doesn’t appear to be repeating any time soon (why not show all three episodes on Thanksgiving, Food Network?!), you can still watch it on demand, online, or on the Food Network app.

I’m grateful for this Thanksgiving surprise, and hope it returns next year—and hope Giada, Alex, and Carla are together again soon, as they made for a terrific team.