‪Imagine a pancake made from a gallon of water and a teaspoon of pancake mix. As a reality show host, Tim Tebow—who joined Fox’s Home Free as co-host for season two—was flatter and less useful than that pancake.‬

‪Now CBS has hired him to solo host its new competition reality series Million Dollar Mile, which is being produced by Big Brother producers Allison Grodner and Rich Meehan.

The show is now in production in Los Angeles; it does not yet have a debut date, but there will be 10 episodes.

In a press release, Tebow said, “Watching good people compete at their highest ability is always inspirational to me. Million Dollar Mile is a show that does just that—it motivates, thrills, and is aspirational, and I’m excited to be hosting this show.”

I ran those two sentences through a free text-to-speech program and generated something that sounds much more human than Tebow’s hosting:

I may still be burned by his presence on Home Free. Fox turned the show from a wonderfully heartwarming, joyful surprise to a lifeless dud.

A big part of the season-two problems was Tebow, who was completely unnecessary, since host Mike Holmes did just fine on his own in season one.

Read a few of the pieces of insight that Tebow shared during his time on the show, and you’ll see what I mean. 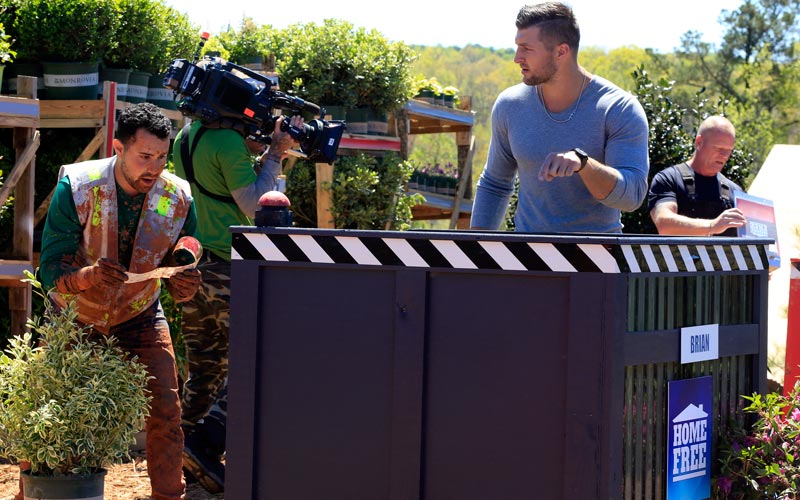 With all of the reality show hosts in the world, why him? I mean, I know Hollywood is all about giving white men plenty of chances, and I understand that Big Brother’s producers have experience working with flat and lifeless hosts, but still.

Even CBS’ own press release says absolutely nothing of Tebow’s qualifications to host a reality show.

Perhaps Tebow has learned to host in the past two years, when he’s not been playing baseball, but his bio excludes his previous experience and barely mentions that he does on-screen commentary (not that commenting on a game is the same thing as hosting a TV show):

“Tebow is a two-time national champion, first-round NFL draft pick and Heisman Trophy winner. Currently, he serves as a college football analyst for ESPN. Prior to joining ESPN, he played three years in the NFL for the Denver Broncos and the New York Jets. Now, Tebow is pursuing a career in professional baseball as a member of the New York Mets organization. He is the author of three New York Times bestsellers: Through My Eyes, which was named the #1 sports and religion book of 2011; Shaken: Discovering Your True Identity in the Midst of Life’s Storms, released in 2016 and winner of the 2017 Evangelical Christian Publishers Association Book of the Year; and This Is the Day, released on Sept. 25. The Tim Tebow Foundation was established in 2010 with the goal of bringing faith, hope and love to those needing a brighter day in their darkest hour of need.”

The bios for the show’s commentators, on the other hand, illustrate their experience in broadcasting and television.

“Maria Taylor is in her sixth season as an analyst, host and reporter for ESPN. In 2017 Taylor became the first African American woman to co-host College GameDay Built by The Home Depot. Also, Taylor was the sideline reporter for ABC Saturday Night Football and patrolled the sidelines for the 2018 College Football Playoff and National Championship Game. Previously, she served as the first female host of SEC Network’s traveling college football show, SEC Nation, alongside analysts Tim Tebow, Marcus Spears and Paul Finebaum. In addition to her football duties, Taylor is a host of Big Monday and NCAA Women’s Final Four and National Championship coverage. She helped launch the SEC Network as one of three studio hosts and worked as the SEC Primetime Saturday Night college football reporter with commentators Brent Musburger and Jesse Palmer. Taylor was a reporter and host for IMG College at the University of Georgia. She appeared on various Comcast Sports South studio shows. Taylor co-founded the non-profit organization The Winning Edge Leadership Academy to develop the next generation of women and minority leaders in sports business. A native of Alpharetta, Ga., she attended the University of Georgia, where she played volleyball and basketball.”

“Matt ‘Money’ Smith has been a Southern California sports staple since 1996. While in college, he was part of the popular Kevin and Bean Show on 106.7 KROQ in Los Angeles, where he remained for over a decade. While serving as the station’s sports director, he worked as a record producer for DreamWorks Records, which was later sold to Interscope. Smith seamlessly slid into the music director chair at KROQ, programming the station from 2003 until 2005. Later, he was approached by the Lakers to join a newly configured radio broadcast after the passing of legendary voice Chick Hearn. In 2006, he partnered with Petros Papadakis, to form The Petros and Money Show, a Los Angeles radio afternoon drive time powerhouse. He moved on from the Lakers in 2010 to provide play-by-play duties for NCAA Football, NCAA Basketball, and NFL Football on Compass Media Networks. In 2017, Smith was named lead play-by-play announcer for the radio broadcasts of the L.A. Chargers. On television, he has spent the last seven years as host on the NFL Network franchise Fantasy Live and drives coverage during the Super Bowl, NFL Draft, NFL Combine and other NFL-sanctioned events. Smith received two undergraduate degrees at Pepperdine University, where he met his wife, Kerie. Currently, they reside with their three daughters in Orange County, Calif.”

They both sound more qualified to actually host a show, but of course, they’re not as famous, and Hollywood loves attaching stars to reality projects even when it makes no sense.