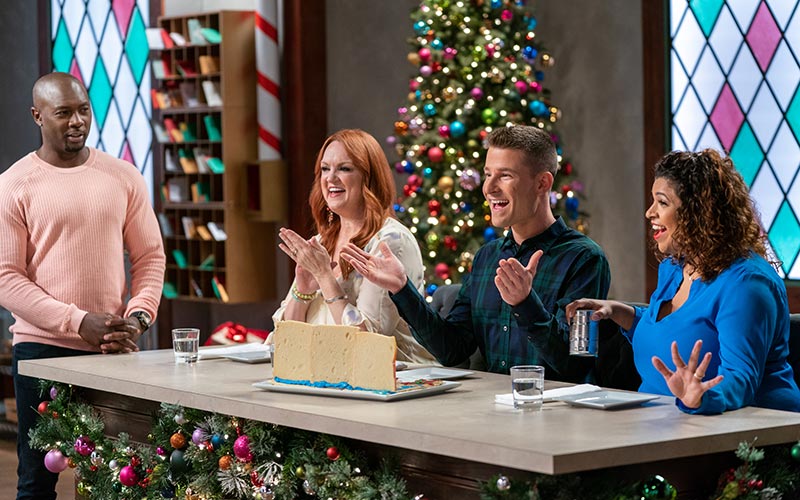 The holidays are here—or at least, they are on the Christmas Cookie Challenge season 2, with host Eddie Jackson and judges Ree Drummond, Dan Langan, and Aarti Sequeira. (Photo by Food Network)

Good Monday morning. It’s the day before election day, so if you live in the U.S., go out and vote tomorrow. Vote.org, a nonpartisan nonprofit, can answer any questions you have about voting, from where your polling place is to what’s on the ballot. (And in 18 states plus D.C., you can register to vote on election day.)

Once you’ve voted, celebrate with some reality TV!

New seasons of Vanderpump Rules, The Profit, and Leah Remini: Scientology and the Aftermath are coming within the next month, and their debut dates have been added to my fall reality TV schedule and guide. That currently goes all the way through March, and includes the 2019 returns of both Wife Swap and Cosmos.

But here’s a look at what’s premiering now.

The holidays are coming, and so are the holiday-themed reality shows. This week, that means premieres of:

Storage Wars (A&E, Wednesdays at 10) is back with more storage lockers full of junk and/or valuable treasures.

By the way, Storage Wars does script lines and stage the lockers. You can hear the show’s executive producer talking about why that is in this video clip.

Also back, for two special episodes: Truck Night in America, the competition between people in their trucks. The specials both have just Ford trucks racing through courses and trying to use their trucks to compete challenges (History, Saturday and Sunday at 8).

Because television apparently needed another series with someone who claims to be a psychic, there’s the new show Mama Medium (TLC, Mondays at 9). Meanwhile, People Magazine Investigates (ID, Mondays at 10) returns with deep dives into various crimes covered by the magazine.

A new two night, four-episode documentary goes Inside North Korea’s Dynasty to look at Kim Jong Un and his family, who’ve ruled for three generations (National Geographic, Nov. 11 and 18 at 9).

Besides that, two documentaries make their TV premieres this week: