In today’s Ask Andy, an answer and some analysis about something that happened off-camera on Survivor David vs. Goliath, and a question about a change in a Bravo reality show that left just one cast member behind.

If you have a question about a reality TV show, send it in and I’ll try to answer.

A question about the Survivor tribe swap

I know Survivor and Probst make a big deal of explaining that everything happens according to a pre-set timeline, and not on the fly. Regardless of who is still in the game or what the narrative is, the challenges happen when they planned for them to happen.

So that makes me curious about what happened […] with the tribe swap. Bi went home due to an injury—if she hadn’t, there would not have been even teams for the tribe swap. As it turned out, there was one guy without a tribe and they sent him to Exile.

But what would they have done if Bi hadn’t had to leave the game? I was initially thinking about the guy who was medically evac’d earlier as making up the difference, and maybe then they wouldn’t have sent the extra guy to Exile—but that didn’t work because they didn’t have a tribal the night he was evac’d so they still would have been down a person.

So did they handle this one on the fly after all, or would they have had uneven teams going into a swap? That seems unusual for Survivor. Thanks! —Toni

This is an excellent question, and Jeff Probst has answered it—but not fully, which makes it an interesting moment to discuss before the merge arrives tonight.

EW’s Dalton Ross asked Probst if Bi’s exit affected the swap, and gave a specific example: “was the original plan to do the tribe swap in episode 5 after your fourth Tribal Council, with 16 people left in the game, but because you lost a fourth person early you had to move it up an episode?”

Probst said definitively that was not the case, and the swap was always going to happen in episode four:

“Nope. That swap was already set for that episode. In fact, I actually removed one buff from the tray, in front of the Survivors, just before we did the swap. Due to time, we cut that from the show, but it did change how we executed the swap. We had a slightly different plan in place — always trying to catch them off guard — that we’ll save for another season. But to the essence of your question, it is conceivable that a sudden quit could impact what we had planned, and in that case we would modify and adapt to fit the situation.”

So there’s the answer. But of course, that leaves out so much! There’s so much more we want to know!

I do wish Survivor was more transparent with things like this. I don’t buy the time excuse; I can find 30 seconds of time in that episode to explain how the swap worked, probably just by cutting out unnecessary challenge color commentary.

Survivor and CBS is clearly content with keeping this kind of information away from the audience, perhaps because they consider it too in the weeds for the average viewer, or perhaps because leaving it out generates conversation and conspiracy theories and keeps people engaged.

How did the tribe swap work? Let’s do some math.

From Jeff Probst’s answer, we know that production planned the swap to happen with 17 people left in the game (though it actually happened with 16 because of Bi’s exit due to injury, but we’ll get to that later).

Assuming they’d always been planning a three-tribe swap—and that’s a big assumption!—that would not have worked because 17 is not easily divisible by three.

We know one person would be sent to Exile Island. But 16 is still not divisible by three.

What is divisible by three is 15. That makes me suspect that the original plan was to send two of the 17 players to Exile Island, one man and one woman, and then have them rejoin the game after Tribal Council.

How could they have assured that one man and one woman be selected for exile? The buffs.

There’s one key detail left out here and out of the show: the contestants chose buffs based on their sex, to distribute men and women across the three tribes evenly.

Alison, who has been virtually edited out of this season so far, has a secret scene in which she says that the swap shocked her, because she wasn’t anticipating it. Then she narrates the experience and says: “I’m on the far end of the Goliath tribe, so I am grabbing the last female buff.”

There’s one other clue that I’m going to read a lot in to: the combined reward/immunity challenge during episode four had just one reward for the first-place tribe.

Was the secret plan that Jeff Probst mentions to give the winning tribe immunity, coffee, and pastries, and to send the other two to Tribal Council that night? (Of course, that was such a lame reward that they could have easily created a second tier: coffee and donuts for the winners, one donut to share for second place.)

Anyway, if they’d had two tribals, that would have left three tribes at 5-4-4, and then the two exiled Survivors could have joined the four-person tribes, keeping it at 5-5-5 for the next episode.

That would have been a lot of content for one episode: swap, exile, getting to know three tribes, challenge, two tribes strategizing, two tribals.

A simpler plan would have been to divide 17 into two eight-person tribes and one Exile Island occupant. But I’m stuck on Probst’s plan that they were “trying to catch them off guard,” and a two-tribe split plus an exiled player isn’t really that new or spectacular. 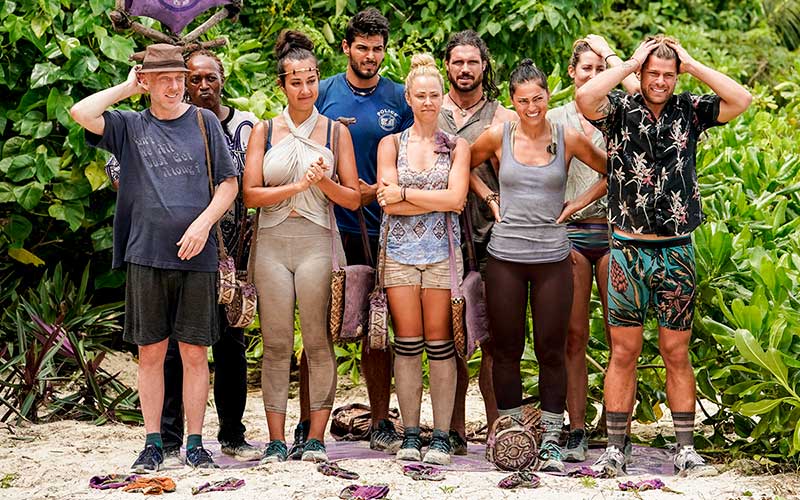 Survivor’s Goliath tribe learns that the tribes will be swapped into new tribes in which they’ll still be dominant. (Photo by Robert Voets/CBS Entertainment)

What actually happened was that 16 people were present for a three-tribe swap. Exiling two people creates 14, which is not divisible by three, so that’s why I assume just one person was exiled.

Probst says he removed one buff. Could that have buff have been the second empty one, to send a second person to exile? We know for sure that buff was going to be given to a female contestant, since 1) the buffs were separated by sex and 2) we know Probst removed one because Bi left.

Without Bi in the game, seven women and nine men were left. So there were seven female buffs and nine male buffs, which sounds like the buffs had testicles or ovaries but I’m sure they just checked chromosomes instead.

Here’s a chart that illustrates this theory:

So, Toni, that’s one educated guess, with a lot of speculation and assumptions. I may be missing something, or my math may be off, so I’d welcome anyone else’s theories.

What do you think Probst was planning for a 17-person tribe swap with Exile Island in play? Comment below.

What happened to Lee Murphy on Sweet Home? 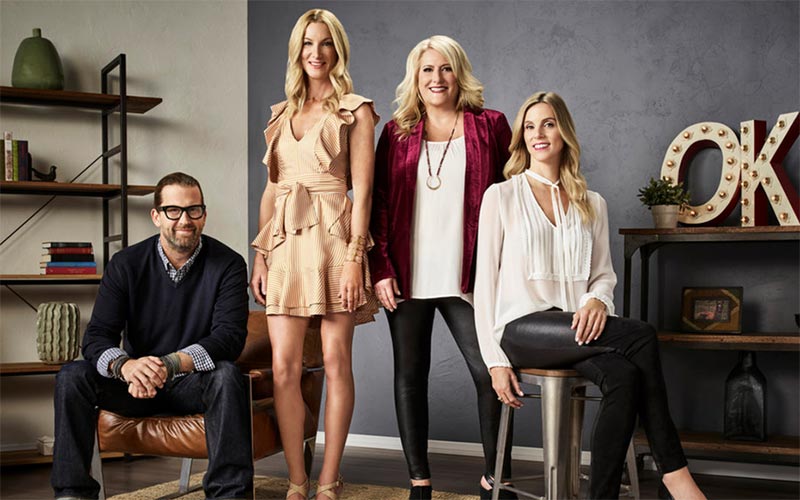 The mystery unanswered anywhere on web: where is Lee Murphy on Sweet Home? She isn’t mentioned on the show or articles about this offshoot of Sweet Home Oklahoma. —anonymous, via text message.

Bravo is calling Sweet Home “season two,” but it’s best to think of Sweet Home like a spin-off to Sweet Home Oklahoma, which aired 16 episodes of the show last spring and summer.

That’s because the new series isn’t a Real Housewives-style docusoap.

Just look at Bravo’s descriptions of the two series:

In other words, they’ve shifted the show to focus on interior design.

Jennifer’s ex-husband Josh Welch is on the new series, as her best friend, Angie “Pumps” Sullivan, because they both fit into that world (Welch met Pumps while designing spaces for her).

Of the four central cast members on the original, Lee Murphy is the one who isn’t on the new series.

That could be for any number of reasons—people choose to leave, productions and networks make casting changes—but I suspect it’s the change in focus may have left Lee behind.

In a recent interview with AOL, Jennifer Welch explained how the show changed. While she doesn’t explicitly mention Lee, she does explain that the producers wanted to change the series:

“It was proposed to me by the production company, like, ‘Hey, we want to keep you guys around, but we think maybe focusing on your design business and having some of those shenanigans in there might be a really great fit for us.’ If you think about the shows that are successful on [Bravo], that made sense to me. But, when the producer called to tell me that, I thought they were calling to tell us to say that ‘Sweet Home Oklahoma’ was cancelled. That’s what I thought. I was expecting it, because I thought we did okay, but weren’t the best fit for the network. The people who watched it loved it, but it takes a lot to get people to watch a new show. And I was okay with that. But then he told me about doing a new season based around my design business, and I was speechless. And it takes a lot for me to be speechless. I never saw it coming.

My gut instinct was ‘no,’ because I’m the primary breadwinner for our family. But then I started talking to some people and tried to absorb it. They all told me to do it, so I came around to it. It was definitely different having them there in the office and at work sites, and there was a transition with that. A lot of the stuff I do is just me sitting there sketching or at a computer, so it can be kind of boring, but the job-site camaraderie is fun to watch.”

And while the new show was going to focus more on work rather than social interaction, Welch told the production company that Pumps had to be involved in the new season:

She didn’t say the same about Lee, alas.