After a pretty uneventful Tribal Council conversation during Survivor David vs. Goliath episode nine, the advantages started flying like hurtful and offensive comments during Thanksgiving dinner.

Nick introduced his vote-stealing advantage and took Alison’s vote. And then Dan asked Kara if he should play his idol for Alison. Dan played the idol—for himself.

And then came one of the single best lines Jeff Probst has ever delivered at Tribal Council.

It worked because of the dramatic pause combined with the physical motion of lifting a small circular piece of wood out of the voting urn: “This is a hidden immunity idol—and this is the idol nullifier,” Probst said.

On it, Carl had written Dan’s name. So when Dan’s name came up again and again on votes, they counted, and he went to join the jury.

Three advantages combined to send a Goliath home, evening out the original tribes once again, and keeping up the ferocious game play and unpredictability. This season!

Even more incredibly, the advantages played kind of masked the fact that Alec and Kara did flip, despite all of their “Goliath strong” back and forth, back and forth. (I was growing tired of those confessionals, honestly.)

Nick made a case at Tribal Council to “play with who you want to play with and with who you trust, and forget about the buffs we put on day one,” but the Goliath majority seemed to be (rationally, smartly) sticking together. Is that now over?

What is definitely over is Kara and Dan’s thing, whatever their thing was, and not just because of the vote.  The way Kara and Dan’s relationship/friendship/alliance was initially edited, I never expected for either of them to turn on the other. I expected them to be annoying.

But Kara basically declared Dan to be a drag on her game, like trying to shop on Black Friday with a small child, because everyone knows you can’t effectively punch other adults in the sternum in order to get a 35 cent Instant Pot if you’re also holding a kid. 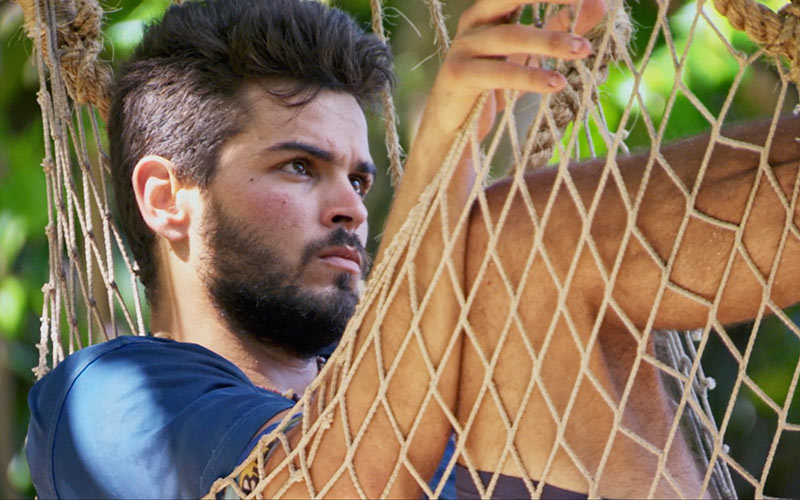 After Dan was voted out, he said in his final confessional, “You think when you have an idol, you’re golden.”

Yes you do. And while his exit was absurdly entertaining, it does suck to be him, to be the first person to learn of this new twist. It’s like playing football and running across the end zone line, the ref says that that line doesn’t count any more.

To complain for a moment—and to be consistent, because I loathe the inane twists and advantages on Big Brother that just casually fling the rules aside—I’d rather everyone playing the game actually knew the rules of the game going into it.

Survivor is a game of strategy, not chance.

If we must have advantages, at least everyone should know what those are. Otherwise, how can you play the game? And if your answer is “well, they have to expect the unexpected,” please seek professional help immediately.

Speaking of advantages, a significant part of the pleasure of this episode came from Christian, who’s vaulting himself into the pantheon of memorable players with almost every sentence he speaks.

For example: “I see blue yarn. That doesn’t occur naturally on this island.” That line deserves Emmys for writing and delivery.

The Davids had been on an early-morning idol hunt, but gave up at sunrise. Not Christian.

As he explained to us, he executed a “breadth-first search,” which gave the episode its name. “You search around a lot of different places a little bit, instead of a few places a lot,” he said.

When he mentioned “sectors,” an overhead shot of the island lit up as the editors highlighted—and then cut to footage of—various parts of the camp, gorgeously illustrating his narration.

Just amazing, never mind the fact that his strategy paid off.

Everything from the small details to the game play has been on point this season, and I haven’t even mentioned Carl getting screwed out of a burger challenge, or Mike White forgetting to cover his combination lock during the reward challenge, or his team screaming random numbers to try to confuse Christian, or the immunity challenge and its balls and snakes at crotch level with close-ups on crotches.

When Survivor used to air on Thursdays, and thus on Thanksgiving day in the United States, the show frequently aired recap episodes. They’d always promise something new and exciting but never quite delivered.

That’s been true of recent seasons of Survivor, too, but Survivor David vs. Goliath has been the opposite.

Carl laughing, Dan’s face lifting and then sinking after his idol was nullified, Mike White drifting off to sleep: just everyone’s facial expressions at Tribal Council were more entertaining than all of last season, and I can’t wait to see what the final four episodes bring.