Skip to Content
The 10 remaining Survivor David vs. Goliath cast members during episode 10—Alison Raybould, Alec Merlino, Davie Rickenbacker, Mike White, Christian Hubicki, Nick Wilson, Angelina Keeley, Carl Boudreaux, Gabby Pascuzzi, and Kara Kay—all of whom are wearing the same clothes they were at the start of the season. (Image by CBS Entertainment)

Survivor David vs. Goliath has a two-hour episode tonight—it’s really two episodes back to back, but they’ve been given one name, “Tribal Lines Are Blurred,” and are officially one episode. And as you can see in the photo above, the 10 remaining players are still wearing the same clothes on day 26 that they wore on day one.

Why haven’t they received their bathing suits yet? And on a completely different note, here’s another burning question: Could the idol nullifier played by Carl have itself been nullified?

Answers to both questions come from host Jeff Probst.

Can an idol nullifier be nullified by an idol?

Last week, Carl played his idol nullifier for Dan. What we know from the rules that were on-screen is that, if Dan hadn’t played an idol, or if Carl had written down someone else’s name and that person had not played an idol, the nullifier would not have counted—or even been mentioned.

But what if Dan had played a second idol, or if someone had played an idol for him? (That’s mostly theoretical here, since Dan previously had two idols but only had one left during episode nine.)

Could he have played them both? Yes, says Jeff Probst. Here’s what he told Xfinity’s Gordon Holmes:

“During the time from when I return with the votes and ask ‘if anyone has an idol…’ to when I say ‘Okay, once the votes are read…’ is the time to play idols.  Anybody can play an idol and you can play as many as you want. So if Dan still had a second idol he could have played it and would have been safe.”

Now that would have been a heck of a blindside! A triple blindside?

I didn’t quite understand how an idol could be played after the voting urn was opened, but I re-watched, and at Tribal Council, Probst held up Dan’s idol, and said, “This is a hidden immunity idol.”

Then he opened the voting urn, pulled out Carl’s advantage, and said, “And this is the idol nullifier.”

Probst accepted an idol and nullified it immediately, and both of those happened before any vote-reading actually began, so idols could have still be played even after the nullifier appeared.

Here’s the part that worries me—I’m a worrier!—about this becoming a permanent part of the game. Probst added this:

“The possibility of a nullifier being in the game may very well change how people manage their idols from this point forward.”

So, what, now you need two idols before you even play one, just to be sure? And when will we get the inevitable idol nullifier nullifier, or the immunity idol immune to the idol nullifier?

By the way, for more on the strategy behind that vote and the previous one, read Nick’s detailed analysis of the two votes and his strategy.

Why the Survivor David vs. Goliath cast isn’t in swimwear 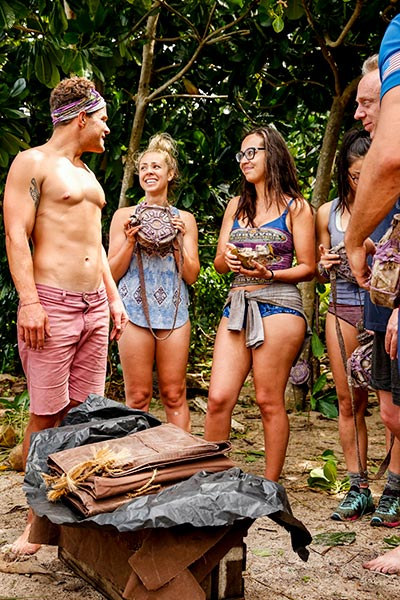 First, some background: Survivors’ clothes are not chosen by players. Instead, the producers decide what they will wear.

In the seasons where they’ve started the game in normal clothing—again, clothes chosen by producers, not the cast members—players have often been given their bathing suits mid-season, though that usually happens off-camera.

Not for season 37. At the merge episode, TrueDorkTimes’ Jeff Pittman wrote this in his recap:

“…it’s ridiculous that we’ve now reached the merge, and the contestants still haven’t received their swimsuits. What entertainment purpose does withholding clothing items from the cast serve? Is there some key demographic that finds watching TV characters walking around in stained/heavily worn underwear exciting? Does Jeff Probst secretly precede every challenge-initiating ‘Survivors ready?’ request with five minutes of unaired pointing at the contestants, giggling, and saying ‘Ha ha! I can see your underwear!’ It just doesn’t make any obvious sense. Just let them have bathing attire on Day 1 guys. Nobody is getting bent out of shape because some dude gets to wear board shorts. Well, the ‘old school’ (pre-Pearl Islands) contestants might, because they complain about everything. But they also were given sunglasses and raincoats.”

So why are the Davids and Goliaths having their epic battle in their underwear and Buffs? (You can buy those Buffs if you want to try to make your own makeshift clothing out of them.)

Probst told THR this last May: “Next season we aren’t giving them swimming suits at all, just a sewing kit. Another one of his ideas.”

Whose idea was that? Tyler Perry, the film director and actor who is also a fan of the CBS reality competition and gives Jeff Probst ideas.

The idea that resulted in the absence of swimsuits was a suggestion to have “filthier” swimwear, though it’s unclear if that just means torn and soiled clothes or, you know, dirty clothes.

That idol could be played after the votes were read. And though Probst said the idea came from Tyler Perry, it had previously appeared on two other seasons of Survivor.

So you won’t be surprised that Tyler Perry’s latest idea also came from earlier seasons of Survivor.

Stranding Survivors and not giving them bathing suits first appeared in season seven, Survivor Pearl Islands, when the cast dressed up for a photo shoot and was stranded in their clothing instead.

They weren’t given bathing suits.

So it’s the second time one of Tyler Perry’s ideas is really just an idea from a previous season that he’s suggested and is now getting credit for, because why not? Perhaps in the future he’ll suggest bringing back people who’ve already been on the show twice before. Oh wait.

Correction: An earlier version of this story said that Survivor China’s cast didn’t get bathing suits, but they did. I apologize for the error.