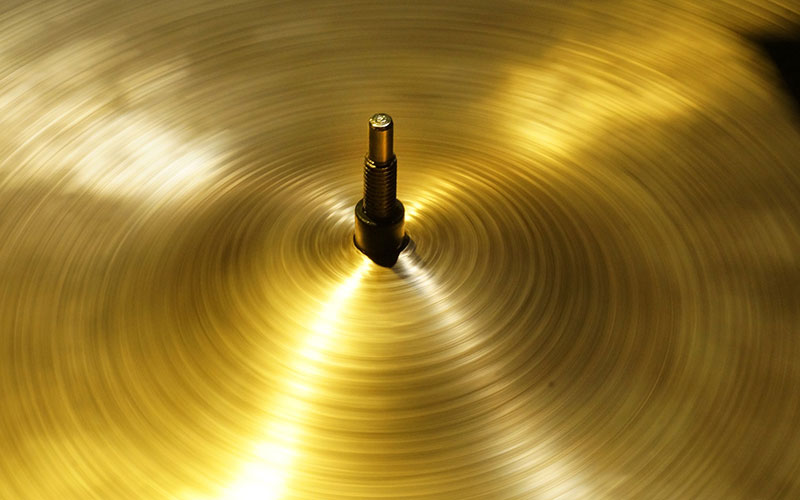 In 2013, someone edited together 50 occurrences of a single sound effect that was used in just a few episodes of Fox’s Kitchen Nightmares, a show that relied on turning a nothing moment into the Most! Dramatic! Thing! Ever!

It’s a sound that will be deeply familiar—and perhaps deeply annoying—to regular viewers of reality TV, because it is so overused. Eeeee, aaaa!

So where does it come from? The same instrument that is responsible for another overused reality TV sound effect—cymbal crash!—also makes that sound.

A cymbal and a bow created that reality TV sound

That sound effect was created with a violin bow dragged across the edge of a cymbal, an action that can actually produce all kinds of effects, some of which sound familiar to me from horror movies.

Rick Livingstone recently told the podcast Every Little Thing, “I am partially responsible, because I was one of the first guys to actually start using them in reality TV.”

In his interview with the podcast, Livingstone discusses how and when he uses other familiar sounds, such as bass drums, bells, bongos, and the familiar gong, which he calls “a big effect” that would be used “if something major’s happening in a scene.”

These kinds of sound effects are necessary, Livingstone says, “because reality TV, by itself, without enhancements, is just not enough to capture an audience’s attention. You need to sort of direct their emotions to certain things.”

The bowed cymbal came about during Survivor Borneo, which was his first job as a music editor.  “Technically, it’s called a bowed cymbal. You take a violin bow and scrape it across the edge of the cymbal, causing it to resonate in the sound that you heard,” he explained.

Livingstone says that the sound evokes “tension, which is the mainstay of all reality TV. … You want to develop tension, you want to put people on edge, because apparently, that’s how you keep them watching.”

Or drive them insane, as this sound effect can do.

The reason it’s so prevalent now is because that sound was copied—like so much on Survivor season 1—and then overused. “It didn’t take me long to hate that sound. Every time I turn on the TV, I hear that same sound. It’s kind of like, now, nails a blackboard,” Livingstone says.

Listen to the full episode and interview.