Skip to Content
Daphnique Springs is one of the stand-ups followed by Amazon's Inside Jokes; Leo Gallo is a singer on Netflix's Westside. (Photos by Adam Rose/Amazon and Greg Gayne/Netflix)

Inside Jokes is the more conventional of the two, and is easy to recommend: though its central action takes place in dim comedy clubs, it’s a bright and a nimble show that slides from one person’s life to the next, and is full of life and laughs.

Both series cut between performances and hanging out with the cast members, nearly all of whom have raw and vulnerable moments in front of the cameras, and share stories of their past trauma and suffering.

Paradoxically, it’s the show following stand-up comedians—who always seem to be on, cracking jokes, even at the camera crews who are following them—who come across as more authentic, while the one following singers feels more performative and distant. 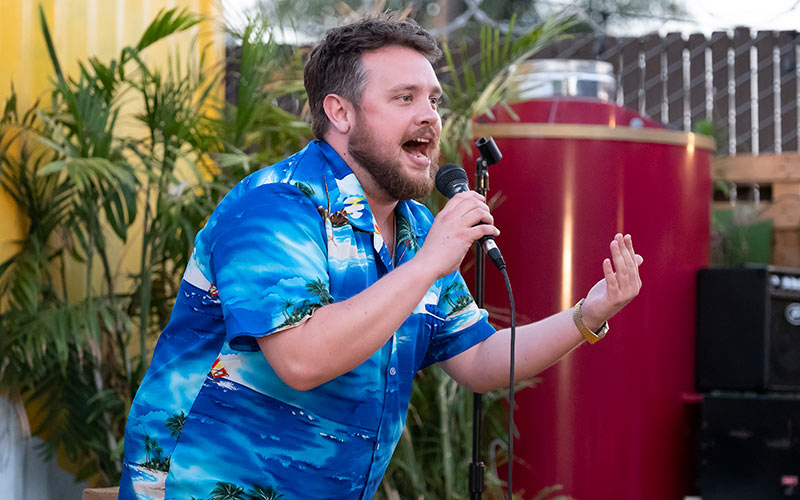 Simon Gibson, one of the stand-up comedians followed by Inside Jokes. (Photo by Beth Dubber/Amazon)

They’ve all made it to the call-back stage to be one of the 20 up-and-coming stand-ups chosen for the New Faces of Comedy showcase at the Just for Laughs festival in Montreal.

Comedians who’ve been chosen previously for that showcase include names you may have come across before: Amy Schumer, Kevin Hart, Hannibal Buress, Chelsea Peretti, Gabriel Iglesias, Jerrod Carmichael. So yeah, this is a big deal.

Each of them are very funny, charming people, and spending time with them between sets is equally entertaining, and sometimes they’re even funnier, whether it’s Alzo Slade getting a haircut, Rosebud Baker hanging out with her sister, or Simon Gibson and MK Paulsen giving a tour of the small apartment they share.

The first episode picks up the week before callbacks in Los Angeles, and episode two does the same for New York callbacks. In the third episode, they find out if they’ve been chosen or not.

The stand-up shown in the opening moments is not all that funny, especially compared to what’s coming—at the call-backs that end the premiere, and in future episodes.

Inside Jokes helps us understand why. The editing frequently lets us see a comedian telling the same joke multiple times, at different venues, and in doing that and does a wonderful job of illustrating just how challenging it is to not only craft and deliver a strong joke, but to land it.

What works for one audience leaves another in silence. Their work looks effortless when it’s being done well, and while Inside Jokes makes sure we laugh, it also makes sure we know just how much effort that takes. 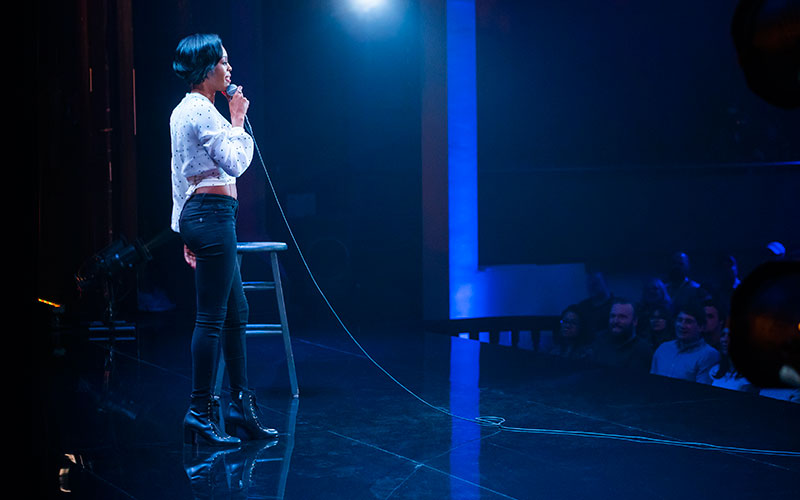 There are six episodes total; episode four picks up a week before the showcase, and the finale includes the actual, six-minute performances at the Just For Laughs festival.

In the way it connects us with people working and struggling to get recognized for their talent, balancing life with pursuit of their art and passion, Inside Jokes reminds me a little of Bravo’s The It Factor, a short-lived two-season, 2002 to 2003 documentary reality series that followed up-and-coming actors, including an actor who went on to become one of the Avengers.

As produced by Jimmy Fox’s Main Event Media (which also produces W. Kamau Bell’s United Shades of America) and directed by Neil Berkeley, Inside Laughs presents all of this material in a controlled and visually engaging way, though without calling attention to itself.

But the production does allow itself to be seen, and that makes all the difference. The comedians frequently reference the camera crews, in their stand-up and even more directly.

As she opens a cab door and climbs inside, Rosebud looks at the crew that’s filming her from inside the cab and says, “Oh my god, you guys are here?” And then, as she exits the cab and closes the door, the camera crew staying inside, she says, “See you in there!”

It’s a small but hilarious moment that illustrates just how absurd it is that—on many unscripted, documentary, and reality series—camera crews wait inside houses and cars and other places for people to enter, but they’re never acknowledged.

Inside Jokes acknowledges the entire reality of what its cast is going through, and that makes it the opposite of Westside.

Netflix’s Westside: drama with a side of music 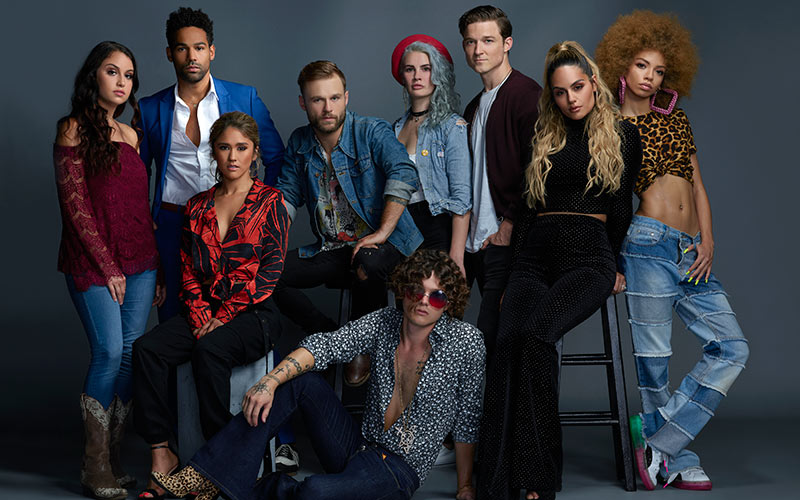 The cast of Westside may be slightly more familiar: there’s Pia Toscano from American Idol season 10, and Leo Gallo, who was in a 1990s boy band called Youth Asylum.

It’s the latter half that Westside ignores, or at least works so hard to ignore that it’s glaringly obvious.

The showcase itself barely feels like it matters: They’ll sing one night in L.A. Okay, great. That happens every night.

During an argument with another cast member, Sean Patrick Murray—who’s a singer, actor, and the cast member who’s also producing the showcase event—says, “I am a producer and I’m putting you in this spot and I’m giving you a job, so I am putting on my producer hat.” He adds, “This opportunity and the reason why he’s here is because I created this.”

This seems like it’s supposed to refer to the showcase, but it’s also clearly pointing at the reality show itself. After all, Murray is the co-creator of Westside the reality show.

But absolutely no one is willing to talk about that, and it’s a huge strain on the show for everyone to actively the cameras and the reason they’re all together.

Westside comes across as more of a hybrid of The Real Housewives and The Hills than of American Idol and The Real World, which is to say it’s a lot of contrivances with some authenticity floating around somewhere in there.

Its music videos and interpersonal drama are all mashed together with music and dramatic images, formed into a papier-mâché figure that’s still wet and sticky and doesn’t know what it is yet.

What Westside does with singing is its biggest idea: There’s some vérité music, but there are also intricately produced interludes.

These aren’t musical numbers, like some kind of reality TV version of Glee where the characters suddenly start singing, but rather fully produced music videos starring one or more of the cast members that are just dropped into the middle of the show.

They actually were filmed later and inserted in an attempt to highlight or heighten elements of the plot, but they fit surprisingly well.

Sure, some of the music videos work better than others, and some connect more directly and immediately to the narrative that’s preceded it. But like the show itself, they’re often surprisingly absorbing.

When it’s not cutting to music videos, Westside alternates between riveting moments and tedium—tedium that’s convinced it’ll be even more fascinating with the addition of more tedium.

Despite dragging in some moments, it does show us quite a few painful and raw moments.

After a touching, unguarded pre-wedding moment between Sean and his soon-to-be-husband, and after an emotional ceremony, the reception party starts.

Then James—an actual friend of Sean’s, not just a friends-for-the-show friend—leaves to drunkenly wander the streets before peeing all over two dumpsters in an ally and then snort drugs. A camera hovers so closely that I’m surprised urine didn’t splash on the lens.

The two talk about this briefly, but then Westside drops it and moves on to the next shiny object it finds.

In one workshop, as the cast tries to write songs together, they brainstorm stories from their lives and then write them down into boxes that’ve been drawn on a whiteboard.

Westside feels like it was created that way: it jumps from box to box, checking them off and then moving onto the next. It’s beautifully drawn but struggles to get anywhere past the platitudes: artists who are being themselves and blah blah. 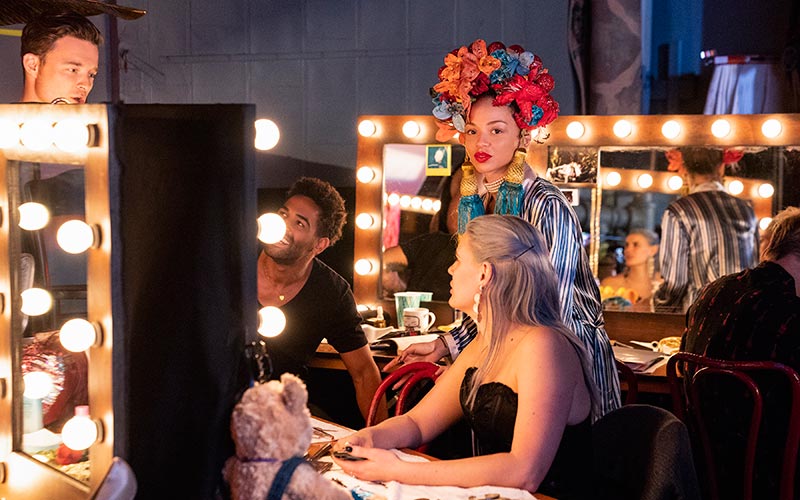 Watching Westside, there were moments when I was riveted, and moments where I rolled my eyes at the phoniness of the conceit.

Since it’s produced by Love Productions, the production company that brought us The Great British Bake-Off, I was perhaps naively expecting a similarly light and charming touch here. It’s not that GBBO isn’t produced—it is, and expertly, and a lot happens behind-the-scenes on GBBO that helps make it seem so smooth.

Westside also discards many of reality TV’s conventions: there are no interviews, no off-camera voices of producers asking questions. But there are clearly off-camera producers coordinating everything that’s happening on screen.

The editing attempts interesting things with flashbacks and smash cuts, and with its dynamic music videos and diverse cast, the show, too, is attempting something.

That’s what Westside should get the most credit for. It’s trying to create something new, even if that thing has ended up wildly uneven, like a brand-new highway that’s beautifully paved but missed some potholes and added too many unnecessary speed bumps.