Duct tape: That’s the subject of the first experiments to be conducted on MythBusters Jr., the new spin-off of the series that is coming to Science Channel next year.

A preview and the identities of the six new junior MythBusters are below. They’re kids ages 12 to 15, including a college sophomore majoring in astrophysics who is 12 years old. (The full cast list is below.)

The cast has also has two people from the MythBusters universe: Original MythBuster Adam Savage, an a  runner-up from the awesome MythBusters: The Search, Tamara Robertson.

The six kids, along with their adult mentors, will tackle things from pop culture, including AMC’s Breaking Bad and the Sandra Bullock film Gravity, plus they’ll also be “building a fire extinguisher jetpack” and creating “dominos big enough to crush a car,” according to Science.

Adam Savage with one of the new junior MythBusters, Elijah, who’s been duct taped to a wall on the series premiere. (Photo by Science Channel)

Adam Savage said in a press release, “These junior MythBusters are amazing. And while they’re kids, the myths we take on are as full-sized and as explosive as ever!”

There will be 10 episodes of MythBusters Jr., airing Wednesdays at 9 on Science Channel starting January 2, 2019.

In the series premiere, Science says, it’s a return to:

Watch the beginning of the episode:

Adam Savage will work with six kids, who are have mad STEAM skills. (That’s science, technology, engineer, arts, and math).

The series will also include two other adults, according to Science Channel: 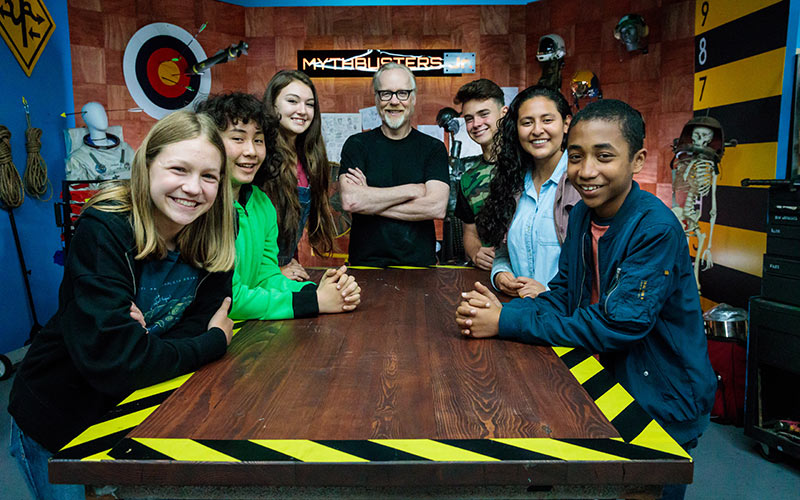 The MythBusters Jr. cast, with original MythBuster Adam Savage at the center. (Photo by Science Channel)

The new, young MythBusters are: