Skip to Content
Donald Trump at a campaign stop in 2015 in Iowa. (Photo by Matt A.J.)

Donald Trump’s former personal lawyer, Michael Cohen, says Trump repeatedly used racist language before he was president, and has detailed that—including a comment he says Trump made about The Apprentice season one runner-up Kwame Jackson that included a homophobic slur.

Cohen, who pled guilty in August to eight crimes including “evasion of personal income tax,” “willfully causing an unlawful corporate contribution,” and “making an excessive campaign contribution,” now faces between 46 and 63 months in prison.

He talked to Vanity Fair, which reported that Trump’s recent racist, dehumanizing attacks against groups of people “activated within him an urge to reveal details from his tenure at the Trump Organization, during which he said the president privately uttered chilling, racist language in one-on-one conversations” because “he knew that the president’s private comments were worse than his public rhetoric, and he wanted to offer potential voters what he believed was evidence of Trump’s character in advance of the midterm elections.”

Vanity Fair notes that “Cohen is aggrieved, and his credibility has been questioned by the president, his lawyers, and others.”

What Trump said about Kwame, and Kwame’s reply 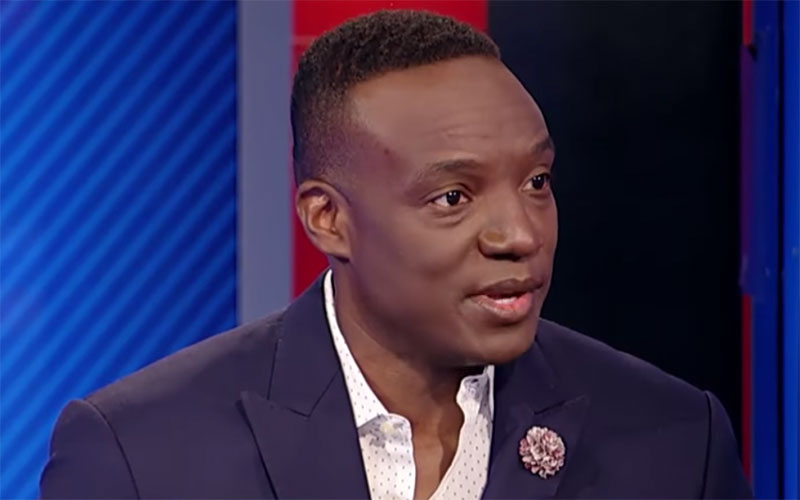 Kwame Jackson on the Fox Business Channel in 2016

Season one of The Apprentice came down to Bill Rancic and Kwame Jackson.

Trump hired Bill and fired Kwame—who had an MBA from Harvard and worked at Procter & Gamble and Goldman Sachs—citing Kwame’s failure to fire Omarosa.

Omarosa, of course, would go on to have one of the highest-paying jobs in the White House and then exit from the Trump Administration; she went on to write a book that included details about her “growing realization that Donald Trump was indeed a racist, a bigot and a misogynist,” including his use of the n-word.

This summer, when Omarosa said she heard Trump using a racial slur against Kwame, Kwame told Variety, “Hard pass on all things Omarosa, no thank you. By me commenting or you covering the story, it simply adds fuel and attention to tomfoolery.”

In Vanity Fair, Michael Cohen recalled a conversation that occurred several years into the NBC show:

“Trump was explaining his back-and-forth about not picking Jackson. He said, ‘There’s no way I can let this black fag win.”

Kwame told Vanity Fair, “My response to President Trump is simple and Wakandan: ‘Not today, colonizer!'”

By the way, three years ago, in the summer of 2015, Kwame said this about Trump’s rhetoric and attacks against other people:

“What you’re not entitled to do is create a toxic environment that creates this whole poisonous ecosystem, where people hear these dog whistles of ‘Mexicans are taking over. They’re all rapists.’ ‘Black people are out to get your money, your jobs.’ Whatever it may be: ‘Gay people are ruining traditional marriage.’

All those things are, of course, dog whistles that create this toxic ecosystem that weak-minded people act on: Dylann Roof, Tim McVeigh. Those are the people who hear those things and then go out and have direct action, and then everybody goes, ‘Oh! I don’t know how that happened. I didn’t contribute to that discourse. I didn’t say I’ll take back America.’