Since the original Queer Eye concluded, Carson Kressley has not been absent from either television or reality TV: Besides appearing as a judge on RuPaul’s Drag Race for the past four years and seasons, he’s done everything from Dancing with the Stars to Celebrity Apprentice to Worst Cooks In America.

But it’s Bravo’s Get a Room with Carson and Thom that has fully unleashed Carson Kressley, giving him not just the space and time to play around, but also a familiar friend and partner, original Fab Five member Thom Filicia.

Watching the two of them play is like eating chocolate-covered caramel popcorn: it’s a lot, and perhaps some of the accoutrements are unnecessary, but it’s delicious and I just want more and more.

The show’s premise is simple and almost beside the point: Each episode, they redesign spaces for two different clients. One is typically a couple looking to do something to their house; the other is a more purpose- and personality- driven space (a bakery, a psychic’s space for readings, a basement gym for a trans man who wants to create a safe space for non-binary people to work out).

The clients are actual design clients, and fronting their own money for the project—though, as the show acknowledges sometimes, they’re getting trade-outs and significant discounts, thanks to all of this being on TV.

But this is not an HGTV show. The bulk of the work is done off-camera by teams of people who are sometimes on-camera, but only momentarily.

They, like the clients, only get cursory attention, because they’re all just there as comic foils for Carson and Thom. In the case of the clients, sometimes they’re actually straight people, sometimes not.

The design work is an excuse for Carson and Thom to fling jokes at each other, their clients, and the spaces. That’s what gets the editing’s attention.

The jokes—oh, the jokes. Not all of them land, but many of them do; they deliver self-deprecation and shade; they’re visual and verbal; some are repetitive, such as references to oral sex. Like the tchotchkes that Thom and Carson and the design team often overstuff spaces with, there may be too much, but it’s hard to focus on just one since there are so many. 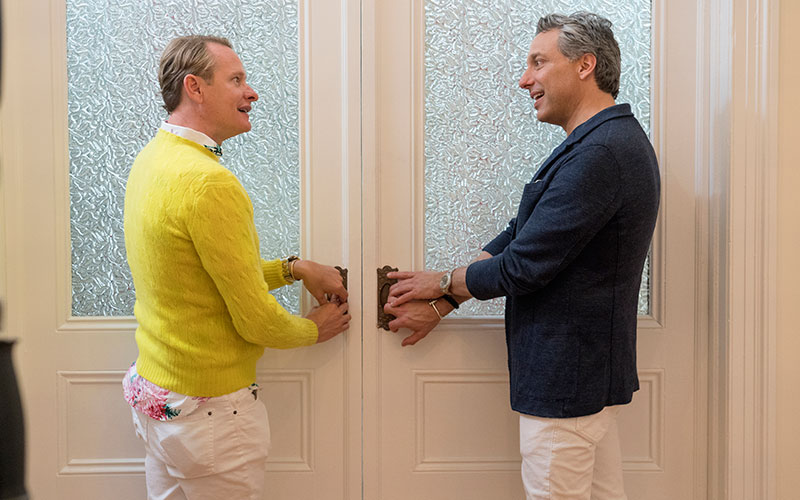 When Carson and Thom are alone, Thom does a bit of design work—picking out a floor or a paint color—and Carson makes jokes. He’s labeled on screen as an “Interior design trainee,” which is just a clever way of saying “here to play.”

He can describe design, though, and often surprises me. And Carson does a little design work, usually the kind of project that would feel juvenile on Trading Spaces Junior, like spray painting a chandelier.

Late last month, Netflix released a clip of new Queer Eye member Tan France shopping with Hasan Minhaj. I wrote then that I wished that the two of them had their own show, because their banter was such a pleasure: quick, witty, meaningful, ridiculous.

That’s essentially what Get a Room with Carson and Thom turned out to be, and it’s wonderful.

Carson and Thom are mirth personified and nothing will get in the way of their joke bender. It’s an hour of light and airy banter between two friends, plus a couple of impressive design reveals thrown in as ornamentation, balls and all.