Skip to Content
Blindfolded homeowners Jennifer Lockhart and Eric Hrabowki discover what they bought without seeing it, but with the help of series experts Anna Kilinski, Jen Metzger, and Michel Smith Boyd. (Photo by Steve Dietl/Bravo)

Bravo has shows about interior design and real estate—Million Dollar Listing, Flipping Out—but those, like so many other Bravo shows, are more like Real Housewives in disguise. At the very least, they’re more focused on drama than design.

Tonight, Bravo edges more into HGTV’s territory with a new three-hour Friday night “Bravo Home and Design” block, which has three reality shows that focus on renovating and redecorating spaces, anchored by a new show, Buying it Blind (Fridays at 8), that for me is the perfect combination of an HGTV and Bravo show.

The other two shows may already be familiar to Bravo viewers: Get a Room with Carson & Thom (Fridays at 9) has already aired two episodes, and Sweet Home (Fridays at 10) is the revamped second season of Sweet Home Oklahoma.

Sweet Home has been transformed into a design series instead of another friends-in-a-city show, and will now follow Jennifer Welch as she and her team redesign spaces. The show will bring back season-one cast member Angela “Pumps” Sullivan to have her home redesigned.

And original Queer Eye cast members Carson Kressley and Thom Filicia have reunited for Get a Room with Carson & Thom, on which they redesign two people’s rooms every episode as Carson jokes about not knowing anything about interior design. They’re back into comfortable banter, and the room transformations have been pretty terrific so far, too.

But it’s Buying it Blind that I’m here for, and fully recommend. I’ve seen tonight’s premiere, and I’m already ready for more.  (There are six episodes in the first season.)

Each episode follows one couple who lets a team of experts buy and renovate a house for them—without seeing it first.

The genius of the format, which was created by Married at First Sight production company Kinetic Content, is that there are two reveals in every episode: first the couple sees the garbage house they just bought, and then 30 minutes later in TV time, they get to see it transformed into a space that fulfills their hopes and dreams.

I’m exaggerating slightly, but what’s also interesting is that the tension of the couple’s reaction to what they’ve just purchased for, say, half a million dollars is tempered by what we know is coming: a full transformation, using the remaining part of their budget.

While the couple meets with the experts and makes clear what they’re looking for, the show ultimately focuses more on the work of the three experts—a realtor, a contractor, and an interior designer. And their work makes for great television.

I interviewed Buying it Blind executive producer Chris Coelen, and realtor Anna Kilinski, about how the show works, and their insight and other information about the show is below, organized by questions you might have after watching.

Who pays for the house and the renovations?

The couple, not the show.

However, they are getting the services of a realtor, a contractor, and an interior designer for free.

Plus, because this is a reality show, some materials and services might be provided through trade-outs, aka product integration.

But executive producer Chris Coelen told me, “In terms of the purchase price itself and the majority of the renovation costs, those are all put forth” by the couples.

Because the couple’s budget has to cover all those costs, and the final purchase price would dictate how much was left for renovations, the experts worked together. “The three of us had to make this decision together,” realtor Anna Kilinski told me.

Are they really buying the house without seeing it?

Yes. They truly are purchasing a house without having seen it.

However, since they are actually spending hundreds of thousands of dollars, and this is a real transaction, they had to sign off on the offer being made, and also participate in the closing process. Thus, they did know what the purchase price is—and might even have seen the house’s address.

But the couples didn’t see it until they were taken to the property, blindfolded.

“Legally, they need to sign a contract. They’re the actual buyer,” Kilinski said. “They were technically under contract with the property before they had a chance to see it.”

Executive producer Chris Coelen from Kinetic Content told me that the couples “were willing to play ball with the process and go through with the process,” and he emphasized how real that was: “It’s not something that anyone took lightly. It is a real transaction, it is that amount of money for the participants is extremely significant.”

Who are the cast members?

You may recognize Michel from The Real Housewives of Atlanta; he appeared on that show because he worked on Sheree Whitfield’s home, which is known as “Chateau Sheree.”

Anna told me she regularly receives calls from film and TV production companies who are looking for referrals or others, but a person in her office, RJ, who she called a “Bravo superfan,” insisted she respond to the Buying it Blind production.

She ultimately said yes because “Kinetic and Bravo were actually looking for a true expert, not just a TV personality.” 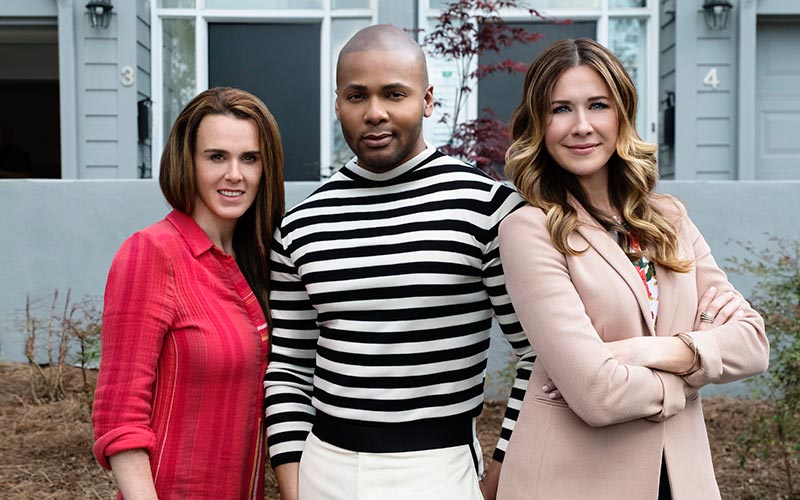 Here are Bravo’s bios for them:

“Anna K is a wife, a mother, and a powerhouse in the real estate industry. Growing up, she learned the ropes of buying and selling properties from her father and her entrepreneurial brothers. After working as a project manager for a local developer, she quickly found her strengths lie in problem solving and earning the trust of her clients. Known as a no-nonsense professional in the Atlanta market, Anna K lives and breathes real estate as the owner of Anna K Intown, a highly productive real estate team associated with Keller Williams. Simply put, it’s in her blood. She is not afraid to put her foot down during negotiations or tell a client when a deal is not worth their investment. Consistently recognized as an industry leader, her honesty, integrity and leadership combined with her ability to roll up her sleeves and deliver results make her a perfect match to help couples buy blind.”

“Jen brings a diverse and long-standing history in property development to the Buying It Blindteam, having grown up in the family business. As a child, Jen grew up visiting construction sites with her father, who is also a builder. Jen also has her Real Estate license and has a passion for finding homes with hidden potential and truly bringing them to life for her clients. Half owner of Broad Builders, which is owned by two female contractors, Jen is known for her ability to find diamonds in the rough and deliver amazing creations. As a former athlete, Jen never gives up and thrives in high pressure situations allowing her to deliver for her clients while buying blind with her creative eye. With an impressive track record and ability to connect with all of her clients, Jen will stop at nothing to give the couples their dream home.”

“Growing up in Louisiana, Michel is a stylish Southern gentleman enthralled by all things architecture – a love that eventually led him to move to New York to combine his passion for fashion and his first childhood love. Michel’s name is a brand all in and of itself. Known for luxurious and tailored interiors that pack a punch, Michel is widely regarded as one of Atlanta’s top interior designers. His confidence in his approach to interiors and fashion bleeds into everything Michel touches. With a deep rooted passion and love for his projects and his clients, Michel always strives to be indispensable. The couples may be buying blind, but Michel is always 20/20 when it comes to designing any home.”

Where was it filmed?

Like so much reality television and Hollywood film, the series was filmed in Atlanta and its suburbs.

The reason for so many productions in Georgia: tax credits. If a production costs at least $500,000, they get a 30 percent tax credit from the state.

And “Georgia hands out more film tax credits than anybody in the world except the U.K.,” The Atlanta-Journal Constitution reported.

Where did the show come from?

Buying it Blind was created by Kinetic Content, the production company that produces Married at First Sight in the U.S., and also other shows including Lifetime’s Little Women: LA and ABC’s The Taste.

Kinetic is owned by Red Arrow Studios, which sold the show internationally, and it first aired in Denmark, and has since gone on to air in France and Australia.

Did the show buy crappy houses just for drama?

I wondered if that was by design: Did the show choose houses intentionally that may not have been ideal, to make for a more dramatic reveal and to make a bigger transformation possible?

Not really—but Coelen said that “the chance for it to be a negative reveal is much higher” because couples “have something built up in their mind that may not be realistic.”

Kilinski said “the concept of the show is partially a renovation show” and “while we’re house hunting, I certainly wasn’t looking for a new construction house—because they would have been able to find that,” and “maybe their budget didn’t match their taste.”

She added, “the average consumer can’t always see the potential in things.”

Kilinski looked at between 40 and 60 houses per couple, which means 300+ houses for the entire season. So she really was trying to find something that’d work for the couples.

Is Buying it Blind real?

Other home-buying shows don’t have the best track record.

As is clear to anyone who watches it, House Hunters is staged: it doesn’t film until someone has actually purchased a home, and sometimes the other two options are faked, a practice HGTV defended. And couples on that show are awkward and stilted because they’re being asked to redo scenes over and over again.

But Buying it Blind involves real houses being chosen and renovated for a couple without their active involvement.

Realtor Anna Kilinski told me, “This was actually real. I know a lot of these house shows might back-film some things,” but not here. “The producers were doing an excellent job of capturing what these consumers were going through.”