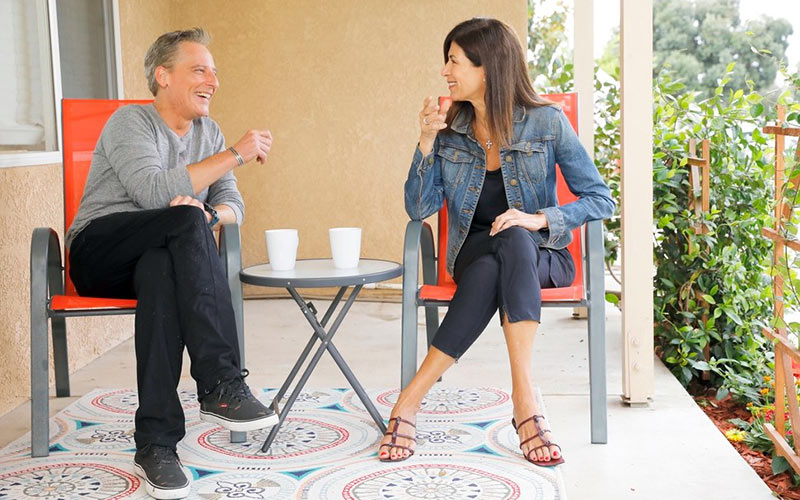 Trading Spaces designers Doug Wilson and Hildi Santo Tomas, presumably laughing about the new homes they'll get to wreck on While You Were Out. (Photo by Trae Patton/TLC)

The TLC show While You Were Out is coming back, featuring designers from HGTV series and TLC’s other recently rebooted redesign show, Trading Spaces.

But the biggest change is that While You Were Out will air on both HGTV and TLC simultaneously—with two different versions of the same episode, with the editing focusing on different things.

In other words, there will be two separate cuts from the same footage. That’s a first for reality TV, and will offer fascinating insight into how producers and networks choose content to target specific audiences.

Variety reported that “episodes produced for TLC will focus more heavily on the relationship between the homeowner and the person they aim to surprise” while “the HGTV version will lean more on the how-to of the makeover and rationale for the design decisions.”

The original show, which aired four seasons from 2002 to 2006, had one home being redesigned while one member of the household was sent away.

The new version will have two neighbors’ houses being redesigned at the same time, kind of like Trading Spaces—except with competition between the designers. (Variety says there will be “extensive digital extras that will amp up the TLC vs. HGTV competition factor more sharply than it will be presented in the linear TV episodes.” So is that a third version for those of us who are fans of competitions?)

A press release describes the new version of While You Were Out this way:

“While You Were Out will feature TLC and HGTV stars designing one room in neighboring homes while each set of homeowners send their significant others on a weekend getaway to await the ultimate surprise reveal upon their return. TLC and HGTV will air their own version of the same episode featuring the same homeowners, designers and carpenters.”

While You Were Out’s new cast

The crossover between networks is possible because HGTV and TLC are now owned by the same parent company.

Kathleen Finch, the executive in charge of Discovery’s lifestyle networks, told Variety, “This is an idea I used to dream about, but we couldn’t do it before our companies came together.”

The audience that the reboot is targeting—female viewers—is quite clear. In the press release, there’s a combined statement from the president/GMs of TLC, Howard Lee, and HGTV, Allison Page, which says:

“This is an exciting moment for the newly combined Discovery Lifestyle portfolio and for our passionate, female audiences. In While You Were Out, we bring back a popular series with a twist—allowing us to superserve TLC and HGTV fans in the way they expect from those brands and collaborating as only Discovery can across two of the top three women’s networks in ad-supported cable.”

The designers from TLC are entirely from Trading Spaces, while HGTV’s group comes from a variety of shows, including Love It or List It, Rehab Addict, and Flip or Flop Vegas.