Skip to Content
Melissa Meier, a Welcome to Waverly cast member and its narrator. (Photo by Chuck France/Bravo)

“I have no idea why anyone would want us to come to their town,” Melissa says in the narration at the beginning of Bravo’s Welcome to Waverly, and it’s an excellent question.

The first episode is a tantalizing glimpse of the show this might have been: seven people from urban areas, picked to live in a rural house, and find out what happens when Bravo fans realize that some liberals can be just as judgmental and annoying as they think all conservatives are.

A super-diverse season of The Real World featuring people with—gasp!—jobs. And lives. (Jobs and lives that don’t involve being on reality shows, I mean.)

I would watch 22 episodes of that, especially since I’m still in mourning about what’s happening to the real Real World.

The series has been exceptionally well-cast, with an atypically diverse group for a Bravo reality show. When they meet each other and settle into their shared Kansas house, there’s an immediate flash of chemistry.

When Zachary goes on Grindr to see how many gay men are around, Melissa asks, “How many faces do you see, or is it all cock?” Trenice shouts, “flag on the play!

Aswar, who ran for mayor in Minneapolis, is a nerd for numbers, and peppers Waverly’s mayor with questions and statistics before completely redesigning the town’s web site. (The mayor points out a typo. Zing!)

The editing can’t get enough of Melissa, who is like a broken sprinkler cheerfully gushing out generalizations about people. “I’m going to shut people down,” she tells her Brooklyn friends mere seconds after declaring, “who knows where Kansas is.”

Welcome to Waverly is airing all of its episodes this week (Bravo, Oct. 21 to 25 at 10 p.m.); it’s already half over. (Bravo calls this an “event series” instead of “quickly getting rid of a show we filmed last fall and didn’t know what to do with.”)

The show, which is produced by Our House Media, was originally ordered as something slightly different. It was called Welcome to America, and a Bravo press release described it like this:

“This groundbreaking social experiment takes a small American town, with demographics that haven’t changed in centuries, and shakes up the population to reflect different parts of the country. Key members of the town will voluntarily leave for one month, and moving in will be a diverse group who will step into the vacated lives of the locals. Who will move into their homes, take on their responsibilities and become new neighbors to those who stayed behind? What new friendships will be made and what old prejudices will be challenged?”

Instead of moving people out, though, Welcome to Waverly just moved seven people in, and paired them with people who have similar jobs.

But this isn’t about occupations; this is a show about political and cultural divides, conservatives versus liberals, red states versus blue states.

But that divide is already a tired cliche.

In Coffey County, where Waverly is located, 3,050 people voted for Donald Trump in 2016, while 727 voted for Hillary Clinton. Sure, 75 percent versus 18 percent is a substantial difference, and the reverse of the 80 percent Clinton received in New York City’s King County, where Trump received about 18 percent of the vote.

But these aren’t desolate wastelands with only one type of person. Just look at Grindr!

Still, the show isn’t interested in that kind of complexity, and sticks with its thesis, which Melissa—of course—says in the first few minutes: “I want to take myself out of the bubble and see conservative middle America.”

But she didn’t need to be cast on a reality show for that.

Seven strangers, outside of their bubbles 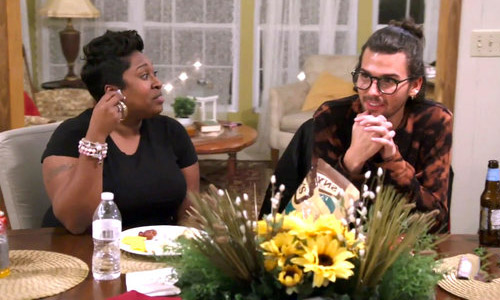 Before leaving for Waverly, Lamar chats with his brother and mother in her kitchen. “We are in times where everything is not safe,” Lamar’s mother says. Her fear is real, and understandable, and backed by far too much evidence.

But Lamar says, “It’s no different than living here, and dealing with people that don’t like you or feel a certain type of way.”

It’s not necessary to leave the coasts to experience racism, or homophobia, or religious discrimination, or any other type of bigotry, and he makes that clear in an interview.

“When it comes to racism, I face it every day, quite honestly. But if somebody doesn’t like me because of the color of my skin, well, stand in line, because there’s a lot of people that don’t,” he says.

That’s a theme that’s echoed a bit but then left behind for Welcome to Waverly to turn into a 2018 version of The Simple Life: city folk in the country, yee-ha!

The series is shots of cows as punchlines, and an aggressive soundtrack with sound effects proclaiming Bravo’s deep insecurity that its audience might not be aware that someone said something ridiculous unless it’s accompanied by a cymbal crash.

It’s more charmed by the idea of taking a bunch of liberals to a Civil War reenactment where someone shocks the cast by insisting that the war wasn’t about slavery (it was).

Despite moments like that, nearly everyone in Waverly who the cast interacts with is friendly and welcoming and nonjudgemental, and I don’t think they’re just playing for the cameras—though they often appear hesitant around them, which is the rational response to having your life taped for national broadcast.

‘A bunch of liberals’

In the first episode, while the group is waiting for their sixth and seventh members to show up, Melissa won’t stop insisting that one of them must be conservative. She’s seen some reality TV before, that Melissa!

“Just for the record, I’m not a liberal,” he says. He’s a gay celebrity stylist who does Nina Garcia’s hair on Project Runway, among other gigs. “I did not vote for Donald Trump, but I’m not a liberal.”

“Somebody pump the brakes! You’re a gay Republican?” Melissa exclaims. “You should have led with that and I wouldn’t have became [sic] your friend.”

She probably intended that as a joke; instead, it hangs in the air.

Lamar says—not in the moment but in an interview—”None of this shit is making sense right now.”

The kind of grotesque intolerance that the cast and Bravo may have expected from Kansans doesn’t really manifest in the first two episodes.

But there was something else there, something far more interesting, all along, and it was coming from inside the house.