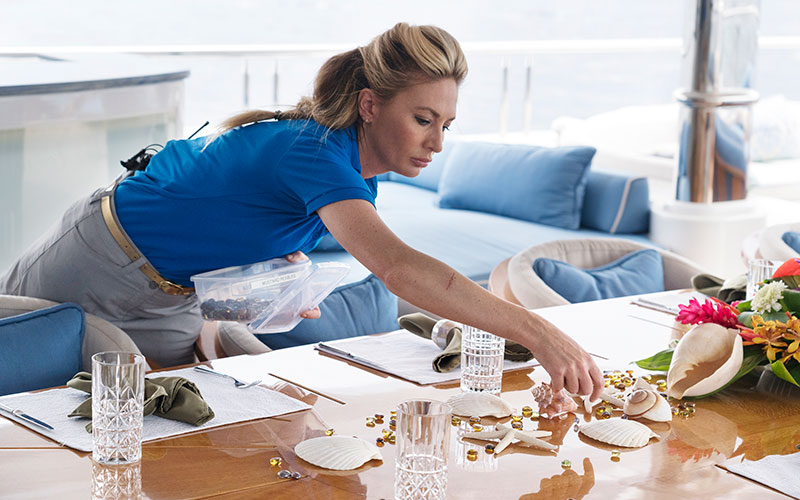 Kate Chastain is the only Below Deck cast member returning for season 6 of the Bravo reality show—besides Captain Lee Rosbach, of course. (Photo by Greg Endries/Bravo)

Good morning, and happy first day of October. The air here in Florida is as crisp as a shower taken with your clothes on, meaning we’re still waiting for fall to show up. But what’s definitely here are fall reality TV shows, with 13 more premiering this week—plus four documentaries, including

Dancing with the Stars Juniors premieres Sunday (ABC, Sundays at 8), with this cast of young celebrities or kids of celebrities. The show was pre-taped, so it’ll be the first non-live DWTS, and the first to not rely on viewer votes—which is probably better for young contestants.

There’s another show with kid dancers debuting this week: Dancing Queen (Netflix, Oct. 5), which follows Justin Johnson and the kids at his Texas dance studio. You may know him best as Alyssa Edwards from RuPaul’s Drag Race. I’ll have a full review of his show in a few days.

And in more kid news, kids help game show contestants on the return of Child Support (ABC, Fridays at 9), which is hosted by Fred Savage and Ricky Gervais.

The original Below Deck and Captain Lee Rosbach return with an entirely new crew—except for Kate—to have hijinks while they’re ferrying passengers around Tahiti. Ever wonder whether or not Below Deck charter passengers have to pay for the experience of being filmed by a Bravo crew, and if so, how much do the Below Deck cruises cost? Click those links for answers!

Ghost Adventures (Travel Channel, Saturdays at 9) is back with a month of episodes that will culminate with “a special four-hour live investigation inside Zak Bagans’ Las Vegas Haunted Museum,” according to Travel Channel.

The actor Danny Trejo hosts Man at Arms: Art of War (El Rey, Thursdays at 8), which asks people to create weapons “inspired by pop culture” and then tests them.

Dr. Oakley, Yukon Vet is back to help more animals in the remote Yukon territory (NatGeo WILD, Saturdays at 9). I’ll have an interview with her this coming Friday.

Dark Money, The Queen, and two other documentaries