“Natalie, is there any way I could have your jacket?” Angelina asked Natalie. There was no response, except perhaps the laughter in places where people were watching Survivor David vs. Goliath, which is delivering entertainment on multiple levels this season.

But Natalie was gone, and so was her jacket. So, too, was the character who’s received the most disproportionate and one-note edit, though Natalie was far from a true villain. Lyrsa said that “possibly, outside of the game, she’s an adorable lady. Inside the game, she’s not.”

As she left, Natalie demonstrated her multiple dimensions: 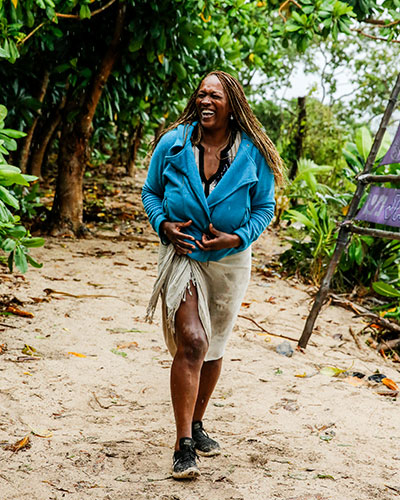 Natalie Cole laughs in the face of a cyclone on Survivor David vs. Goliath. (Photo by Robert Voets/CBS Entertainment)

And let’s not forget the part about demanding things of other people, from deciding to boil all the tribe’s eggs at once to telling the producer interviewing her that it was time to leave—which, you know, is just amazing.

Yet even as a cyclone moved in and the contestants were evacuated, Natalie was enjoying the experience. I think she just gave all of her positive energy to the wrong parts (cyclones).

Natalie left the game because, for the second week in a row, a Goliath flipped—without telling their original tribemates. This time, it was Mike White, who’d said “I’m ready to have a little bit of Survivor without Natalie.”

At Tribal Council, which was funnier than entire seasons of Modern Family and didn’t even have to kill off a character to get people to watch again, the major topic of conversation was jackets.

That’s because Natalie asked/threatened/bullied Nick, asking him to leave behind his jacket and/or steal Lyrsa’s jacket. Natalie said this was “a negotiation” and that she “was leveraging” her power; Nick experienced it as “bullying.”

Angelina defended Natalie at Tribal, saying “she really prioritizes efficiency” and then basically taking the blame, saying Natalie was trying to get a jacket for Angelina, because she was cold all the time.

“I think that it came from love,” Angelina said, which was incredibly kind and/or the world’s most impressive stretch.

Angelina didn’t want to vote out Natalie because of the math, which she pointed out in an interview: Natalie’s exit means there’s now a 7-7 split between the original tribes, though they are presently in three different tribes, and the preview suggests more fractures.

I’d take that for typical Survivor misdirection, but this season the cast is not playing when it comes to discarding logic for comfort.

Survivors evacuate for a cyclone

A beautiful 17 seconds of sunlight and warmth was interrupted by a tropical system so severe that Survivor’s production team had time to write a note, print it on faux parchment, and then deliver it to each tribe as tree mail.

Tangent: I miss tree mail! Do they still get it and just ignore it?

The cast returned from their presumable sequester in a hotel (Did they seem freshly showered? Would they even be allowed to shower?) to find their camps in disarray and to find a person who snuck onto the show and whose name is Alison.

Tangent #2: Seriously, where was she the previous four episodes?

Tangent #3: How did they not use the slingshot challenge for a David tribe vs. Goliath tribe challenge?

First prize was hens and a rooster, and second prize were just eggs. The orange tribe won that, and then won the immunity challenge, too, thanks to Elizabeth’s squirrel-huntin’ practice.

Meanwhile, Dan went idol hunting, and found a clue instead of an idol. It required him to stealthily retrieve the idol during the immunity challenge.

Dan kneeled down while watching others navigate the puzzles, and shoved it into his pants. It’s the only place he could put it, and since he was wearing what look like skin-tight bike shorts, the only place he could put it inconspicuously was in the front. (Remember that Survivor contestants don’t choose their own clothes; it seems like whoever dressed them this season discovered a new kind of underwear because several men are wearing the same style.)

But still: Wouldn’t someone look over during their boat ride back and notice that his bulge looked lumpy and misshapen?

Anyway, Dan now has two idols, and also has a reason to be proud of himself—and bring some drama and a few tears to an episode that was also part natural disaster thriller (howling winds, flooding shelters), part comedy (Natalie? Natalie?), and entirely, thoroughly enjoyable.