The original Survivor David vs. Goliath tribes were split evenly, seven people each spread across three shuffled tribes. A merge is on the horizon—the very next day, in fact. And the tribe that lost immunity had two original Davids and two original Goliaths.

“Our decision tonight is not just going to impact our games here, but everybody playing the game on the field,” Mike White said at Tribal Council. Will original tribe loyalty win out?

Alas, yes: at least for this particular vote. Lyrsa went home; Nick joined with Mike and Angelina to vote for her, perhaps indicating that Mike and Nick do have a bond that will survive past the merge—or perhaps just Nick going along because he didn’t want to draw rocks.

But besides the last two weeks of votes, it seems to be fracturing. The preview shows Alec saying, “David and Goliath is over,” and it seemed like that’s been true for several weeks.

For now, though, Mike wasn’t willing to vote out yet another annoying Goliath. “I’m just throwing my own game,” he said earlier.

The previously-on segment gave some context for the vote: In the voting booth, Angelina admitted her vote for Lyrsa was a ploy to get Natalie’s jacket. She could have kept that callous reason to herself, but instead she just told Lyrsa and the others.

“That says a lot about Angelina’s character,” Lyrsa said, doing some work to help turn Angelina into a crafty strategist. “For her, the jacket is more important than me, so I don’t trust her.”

The actual Tribal Council that led to her exit wasn’t really interesting, either in conversation or drama.

Alas, Lyrsa didn’t give Angelina her sock with a hole in it as she was voted out, but she did admit that the real reason she was upset about being voted out was not losing the game, but because of her future seating assignment, and the vacation that she’s about to take with all of the other pre-merge boots.

“I’m really, really upset that I will have to sit next to Ms. Natalie at the reunion and I have go with her to Ponderosa,” she said.

Over on the orange tribe, renovations started on the shelter, so Elizabeth could decide whether to Love It or List It.

Her tribemates, Davie and Carl, struggled with the noise of splitting bamboo and Elizabeth’s decision to start this project so late in the day; Elizabeth struggled with the fact that the tribe couldn’t bother to work on the shelter or even remember the code they heard on a podcast to get $100 off a Casper.

Seriously, her back pain and the shelter were clearly “taking a toll,” because she broke down, resisting any kind of labels that came with expressing feelings publicly.

Fighting off more emotions, she said in an interview, “There’s two things in life I don’t like. It’s lazy people—” she sniffed deeply “—and it’s stupid people.”

I would have bet $5 that the second thing was going to be beds made from bamboo, so I’m glad I didn’t bet $5. 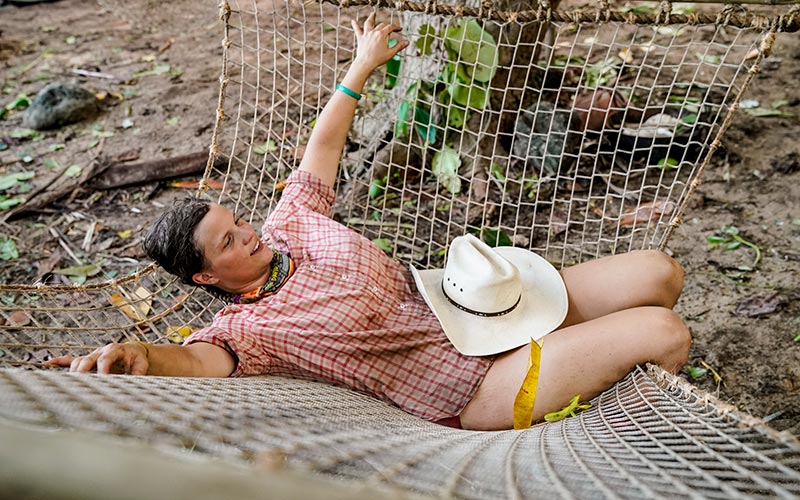 This fracture among original Davids had Kara making popcorn.

Actually, they couldn’t make anything because the orange tribe lost the reward challenge, and didn’t get two vegetable kabobs (for second place) or kabobs and all the fixins (for first place, which the green tribe won).

While the reward challenge had a physical element—most of the tribe had to hold a sack of ‘nuts above their head to give the other person enough slack on a rope—the immunity challenge was particularly brutal, and also one of the most well-designed new challenges we’ve seen in a while.

The tribes had to carry massive dog bowls across an obstacle course, and fill it with water, and then cross the obstacle course again. And then there was a puzzle. It was so challenging that the purple tribe fell way behind, but kept going, until they couldn’t any more and dropped their dish.

Brochachos: Three for the price of one

Meanwhile, on the green tribe, Christian bonded with John and Dan, which gave the episode its title, “Aren’t Brochachos Just Adorable?” (If Brochachos aren’t on the dollar menu tomorrow, Taco Bell will have lost out on a quite an opportunity.)

There was a lot of focus on Christian. Besides learning about flippers—pro tip: put them on after you get into the water, before—he also confessed to us, “I always wanted to be someone that people wanted to talk to. One my biggest fears in this game and outside this game is being ostracized.”

Thankfully, I stopped crying because of the dry heaving that started when Christian said that he was turning from a David into a Goliath and none of that makes any sense and can we please drop it because otherwise this season is nearing a level of perfection thanks.

Christian may have increased his social credibility, but his bro alliance has caused a former David tribe member, Gabby, to bond with a stowaway, Alison, and create a cross-tribe alliance. Or maybe just cross-tribe intel.

Will those hold up after the merge? Or will the now-dominant Goliath tribe reunite to just pick off the Davids, one puny weakling by one? We’ll find out next week.

When the tribes shuffled and the Goliaths had majorities on all three new tribes, I certainly didn’t expect them to do anything other than pick off the Davids, and that’s not what happened.

It may happen after the merge, but this cast doesn’t seem willing to just go along with Survivor protocol, so I don’t think anything is a given. And that’s a great place for Survivor to be.