Sunday’s Shark Tank ended with a pitch by three siblings—ages 15, 20, and 24—who were there to help sell a product created by their dad. That product, Cup Board Pro, sold more than $1 million in just 18 hours after the episode aired, and then sold out on Amazon.

Its creator, Keith Young, died this spring, just a few months before the episode taped in May, so his kids Kaley, Christian, and Keira pitched the product for him and are now running the company.

Their incredibly emotional story—the sharks were crying, I was crying—was compounded because they lost their mother to breast cancer six years ago.

Shark Tank’s production company, Sony Pictures Television, “said Monday that within 18 hours, 26,000 Cup Board Pros had been sold, worth more than $1 million in sales,” according to USA TODAY.

Daymond John tweeted at 10 p.m. ET on Sunday that the product had already sold out then—before the episode even ended.

During the episode, Daymond predicted that, pointing out the power of Shark Tank as a marketing tool: “Once this story is out, obviously the units they have will ship,” he said, while the siblings waited in the hall.

Lori Greiner, Daymond John, Mark Cuban, Kevin O’Leary, and guest shark Matt Higgins decided to team up and put in $20,000 for 20 percent of the company, and they said their profits will go to a charity to help firefighters who’ve been afflicted by 9/11-related illnesses.

In addition, the siblings set up a Go Fund Me page to raise $25,000 for the FDNY Foundation’s Fired Up for a Cure program. Their fundraiser says, “We want to give back as our way of saying thank you. The FDNY has been nothing short of incredible in supporting our family.”

A Chopped champion died before he appeared on Shark Tank 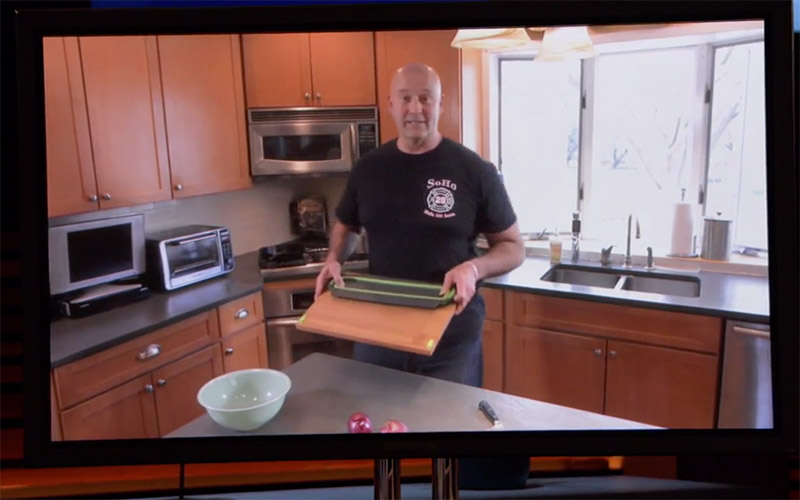 Keith Young died March 17 at age 53 from synovial sarcoma, a rare cancer he contracted because he was a firefighter who helped with cleanup at the World Trade Center site.

CDC data shows more than 1,000 people—emergency responders, volunteers, clean-up personnel—have died as a result of what they were exposed to on Sept. 11 and its aftermath, and more than 150,000 people are enrolled in the World Trade Center Health Program.

Young, who invented his cutting board in 2010, made it far enough in the Shark Tank process to have footage filmed at his house, perhaps for the video packages that sometimes precede a pitch. In the video shown during his kids’ pitch, he was interviewed and also demoed his product.

Shark Tank episode 1002 taped in May.

Cup Board Pro’s Amazon description is a letter from Young’s kids that tells their family’s story:

Our dad, Keith Young, a New York City fireman and chef, invented the Cup Board Pro in 2010. He was a huge family guy who wanted to enjoy more family time instead of being in the kitchen cleaning up messes when making great meals.

Cup Board Pro is designed for exactly that, to simplify the way you work so you can enjoy more time with family.

We watched as he molded his first prototype from plastic cutting boards to finding an industrial kitchen engineer who helped turn his design into reality. During the production of Cup Board Pro, our beautiful mom, Beth King, a believer and dreamer, was diagnosed with breast cancer in May 2011. Our mom was the love of our dad’s life; high school sweethearts with love letters dating back to 1980. Dad put everything on hold to fight mom’s fight with her. On August 22, 2012, our beautiful mom was called home to heaven at age 47.

Our dad was completely heartbroken — we all were. Our mom was our greatest angel and our dad redefined the meaning of strength.

When asked to compete on Food Network’s “Chopped,” he was reluctant. After coming together as a family to encourage him, he went on to be named a two-time Food Network “Chopped Champion.” In 2015, he was diagnosed with a 9/11 related cancer from working at Ground Zero.

On March 17, 2018, our dad was called home to heaven to reunite with our beautiful mom. It was dad’s dream to have the Cup Board Pro in kitchens all over the world and as a family, we are honored to continue his legacy and to be able to share a little bit of Keith Young and the Cup Board Pro with you all.

We are grateful to have such an incredible team behind us making dad’s dream come true! Special thank you to everyone who is part of this journey with us.