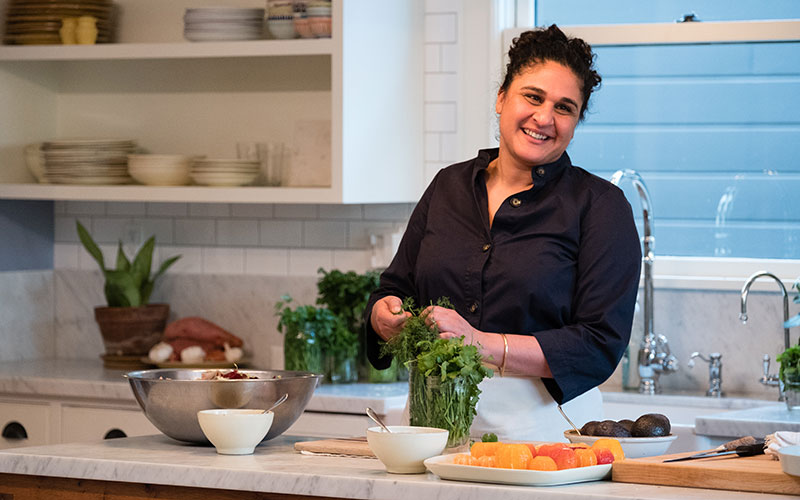 Samin Nosrat’s acclaimed cookbook Salt, Fat, Acid, Heat includes an illustrated chart titled, “What should I cook?” The first question in the flowchart asks, “Have I read this book?”

If the answer is no, the chart says: “Okay, I get it. But this book is really about the journey, not the destination. So maybe stop trying to skip ahead in life, and head back to the beginning. XO.”

But her show is not a travel series; it’s not another Chef’s Table, nor is it a competition like Nailed It!.

Instead, it’s Netflix’s first instructional cooking show. On the show, which is on Netflix today, Samin does travel, but it’s to help unpack the four fundamentals of cooking that she’s identified.

And she always ends up in the kitchen, teaching other people—and us—how to cook.

I interviewed Samin about her show, and about food television, from Yan Can Cook to Emeril. Read the full interview at New York Magazine’s GrubStreet.

We talked about her inspiration, and also about how she chose what to include in the series, which is just four episodes. (She said making those decisions led to “heartbreaking lessons.”)

With Salt, Fat, Acid, Heat, her goal is “to teach you, and to make you feel when you’re done watching, you can go in the kitchen and do something now.”

Having watched everything from PBS to Food Network instructional cooking shows, but also loving what shows like Chef’s Table brought to the, uh, food reality TV table, Samin thought to herself, “Why can’t I have a show that’s beautiful with incredible cinematic style with the beautiful filmmaking that gets this sensory inspiration across, but also serves to be accessible?“

Speaking of accessibility, Samin told me that her “very favorite competition cooking show is Nailed It!, because it exists exactly in that accessible place.”

“You walk away with your heart being so warmed, and I imagine that maybe somebody is learning something, like next time they’ll put eggs in their batter that they forgot,” she added, contrasting it with the “overproduced major competition stuff,” which she said is “putting people in impossible to win situations, they’re giving them not enough ingredients, not enough time, not enough resources and asking for these big asks.”

“To me, that is not about cooking,” she said. “I am just aiming for something slightly different. There’s room for us all.”