Skip to Content
Jeremy Crawford on the first episode of Survivor David vs. Goliath. (Photo by David M. Russell/CBS Entertainment)

Jeremy Crawford’s exit from Survivor David vs. Goliath seemed very clear-cut from the edit, but he’s now claiming in exit interviews that there was something that happened off-camera that actually led to him being voted out.

He also says “it wasn’t a blindside.”

Survivor’s producers and editors create a narrative, of course, using just 43 minutes of footage from three days of conversations, challenges, and other activity.

And sometimes those narratives remove complexity for the sake of simplicity—or to contribute to a storyline or arc that the producers have decided upon, since they know how the season plays out.

The narrative on episode 3 was incredibly strong: it was Natalie versus Jeremy, with Natalie emerging victorious, and basically doing a dance of joy in the voting confessional.

But Jeremy says it was actually someone else responsible for his exit: Angelina.

His explanation also includes more of what he says happened at camp, including his attempt to get the tribe to vote out Dan and flush out his idol, which he floated because he thought there was a women’s alliance. 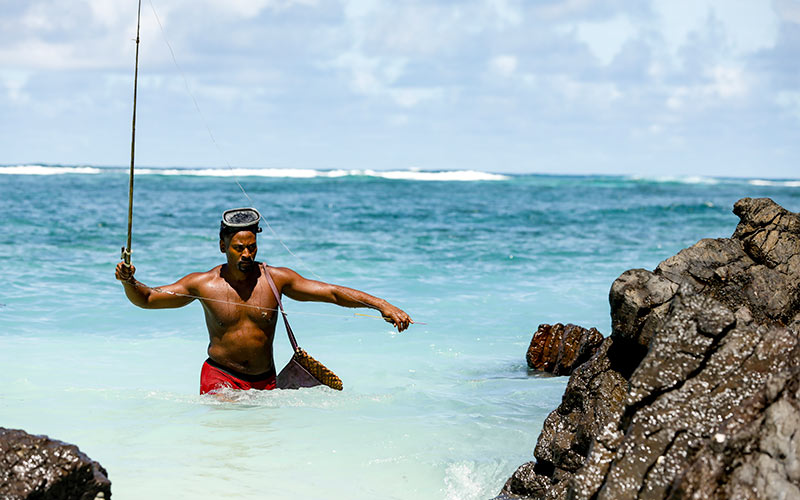 Jeremy Crawford during Survivor David vs. Goliath episode 3, in which he got himself into deep water. (Photo by Robert Voets/CBS Entertainment)

In his exit interview with Gordon Holmes, Jeremy starts by admitting this “might sound like an excuse” because it “wasn’t shown” on TV:

“The reason for the blindside, and it wasn’t a blindside, Angelina was in a showmance with John. It was kind of one-sided like Kara and Dan. But, Angelina had just gotten married. So, she was adamant that nobody make any comments about a showmance between her and John on the show. And essentially I made a joke about Angelina and John’s showmance after our  challenge where we won fishing gear. I made a joke around the campfire and that got back to Angelina. And from that, she went around and told people, ‘He has to go, he’s trying to ruin my marriage. I’m going to be humiliated.’ So, she told people that, but told them not to talk about it on camera. That’s how you get nine people to vote somebody off who they really don’t want to. You add a personal layer from the real world to it. So, it really had nothing to do with me and Natalie.”

In his interview with EW, Jeremy elaborated, saying that his joke was an offhand comment: “Oh, if they catch this on camera, Angelina’s going to be in trouble.”

“In the same way that Dan was in a one-sided showmance with Kara, actually Angelina was in a one-sided showmance with John. The difference being that Angelina was a recent newlywed. I think she got married maybe a month or two before the show. And although it wasn’t obvious, Angelina’s feelings towards John were singularly as real as Dan’s were towards Kara. And like Kara, John seemed not to be in a showmance, but more moving towards strategy. And on our first day, day 1, first hour, Angelina told us, “Oh, I told my husband about Survivor. He knows that I might have to cuddle and be in a showmance and he’s alright with it. He’s like, ‘Do whatever it takes to win the million dollars.’”

Update: Angelina denies all of this. See below for her full statement.

Jeremy told Gordon Holmes that he learned of Angelina’s response “the morning of the immunity challenge. Somebody said ‘Angelina is mad about this joke you made.'”

And he says there was some on-camera evidence of Angelina’s turn against  when Angelina says, “I can’t trust him anymore” to others while they’re sitting in the shelter.

What’s odd to me about this story is that Jeremy says that all this happened off-camera. (He also said, “there was no way to talk to her about it because she didn’t want to talk about it on camera.”)

But this is Survivor, which is so careful about making sure that important moments are captured that contestants can’t talk while they’re being transported.

The reality producers—those who are on the beach with contestants—have their own cameras they can use to film if a camera crew isn’t available. They have infrared cameras at night to capture clear images of  conversations that occur in the dark.

Perhaps the contestants did talk about it on camera; perhaps the production decided to keep claims or jokes about a possible affair out of the TV show.

Then again, Survivor is a show that aired an episode in which a trans man was outed, though, so I can’t think of a reason why they’d ignore a showmance—especially if someone was trying to keep it a secret, especially if that person told others that her new husband was fine with using a showmance as strategy.

There’s always a lot that we don’t see on Survivor. But unlike Big Brother, there are no live feeds, so instead we get different versions: from the editors and from the contestants.

Josh Wigler published an exit interview with Jeremy that also included a statement from Angelina.

“My husband and I are aware of Jeremy’s comments. While we do not appreciate his blatant mischaracterization of my friendship and alliance with John, I am not surprised he feels compelled to attempt to revise the narrative. I think all of this really comes down to one fundamental Survivor truth: being the first eliminated member of your tribe by a unanimous, undisclosed blindside, must really sting, especially for a supposed ‘Goliath.'”