For four years, cameras have been following Dr. Michelle Oakley throughout northern Canada and Alaska, and that’s why her show is called Dr. Oakley, Yukon Vet. But in season six, which begins this weekend (Nat Geo WILD, Saturdays at 9), they’ll sometimes follow her as she works with animals around the world.

“I’ve always done international wildlife work. I do work in Sri Lanka, France, Sweden, all over Alaska and Canada,” Dr. Oakley told me recently. “Now they’re starting to cover a lot more of the international work I do. It’s more representative of what I do. For sure I do work in the Yukon and Alaska, but I do work all over, so it’s really fun to be able to share that.”

Dr. Oakley has been sharing her work life—and family—with viewers for six seasons.

While her daughters, Sierra and Maya, have “been helping me since they were little, but now I feel like I couldn’t do without them,” she said.

Sierra is 21 and a senior at St. Francis Xavier University in Nova Scotia, Maya is 19 and a junior at the University of Western Ontario. Since both are in college, the show is filmed mostly during the summer or during holidays, when they’re home. 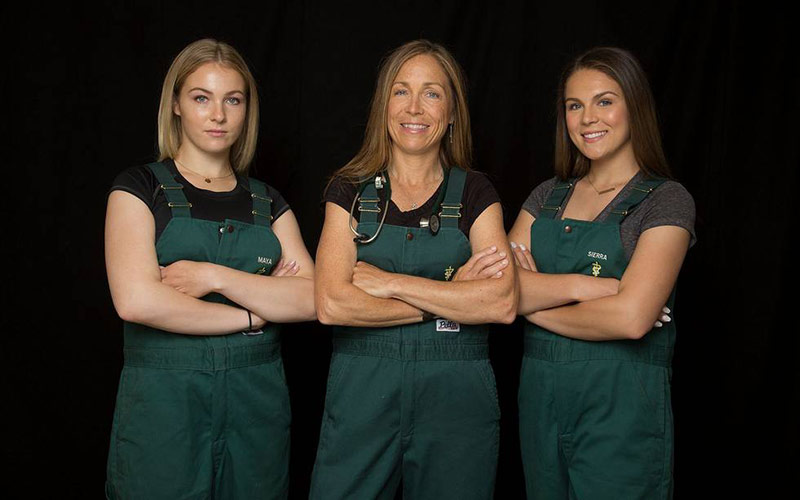 Being part of their mother’s NatGeo WILD reality show is entirely up to her daughters.

“Mom always gave us a choice,” Sierra told me. “We were always allowed to be part of the filming, or we could help behind the scenes. So we always got that choice. Willow chose not to be involved this year, which is fine.” (Willow is Dr. Oakley’s youngest daughter.)

Maya said it took her a while to warm up to the idea of being part of her mother’s reality show. “When we first started, I really didn’t like the idea of filming. I was really nervous and didn’t want to be in front of the camera or anything like that,” she said.

Besides running her clinic and making house calls, Dr. Oakley is also an on-call veterinarian for the American Bald Eagle Foundation, the Yukon Wildlife Preserve, and the Alaska Wildlife Conservation Center.

“It’s filmed just for the Yukon Vet show, and it’s repackaged,” Dr. Oakley told me. “But I have seen footage that isn’t in the other one. They get all the footage, raw footage, and they make it. It’s shorter, it’s a half-hour, different narration. Sometimes different aspects are emphasized. It’s not like we film separately for that.”

In part because Wilderness Vet isn’t fundamentally different, Dr. Oakley said she’d like to do more reality TV, perhaps a spin-off of her current series.

“I’d love to do another show,” she told me. “I think it’d be really cool to cover the international work more.”

“It’s a whole different thing when I have to travel,” she said, noting that her work has included everything from “drugging elephants” to “working on a leopard.”

Working with animals—and a TV crew 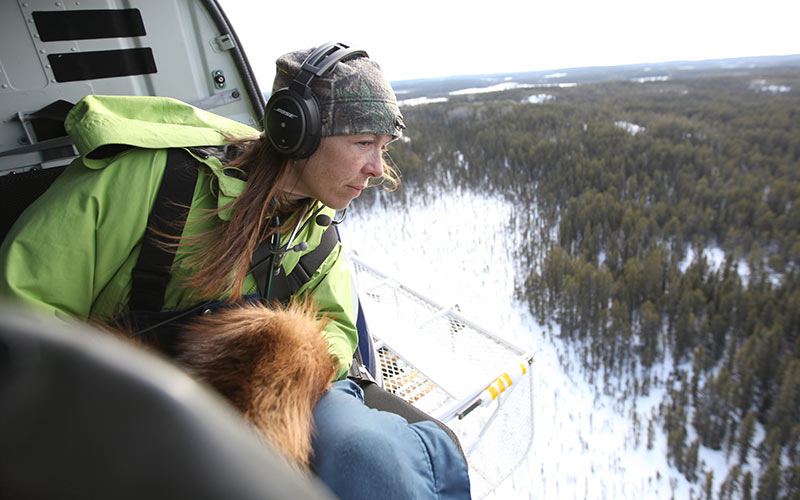 Dr. Michelle Oakley in a helicopter with a patient over Val-d’Or, Quebec, Canada. (Photo by Eric Stalzer/ National Geographic Channels)

Dr. Oakley said that her “kids—they’re not kids anymore!—they’ve grown up with the same crew. We’ve had the same core people.”

That production crew is there with the family “even if they’re not filming,” she said. “They’ll be helping the people, helping kids around, pick up stuff, help me get emergency supplies.”

Sierra gave one example: “Maya had to leave the hospital, and so did my mom. I was left for the rest of the day, and I had to do a whole bunch banding—castrations. I had to finish the job because we couldn’t just stop. Even then the crew was pitching in. Even after filming, they stayed and they helped.”

The people who film their lives are also emotionally invested. “Sometimes we have a sad scene, I’m talking to the owner, and it’s heartbreaking,” Dr. Oakley said. “I look up and there will be tears coming down the cameraman’s face. They’re such good people; we’re really lucky to have them. I really feel like they’re part of our family. We drag them around, they go right in our fridge—the true sign that they’re at home with us!”

Clients don’t have to appear on camera, so the crew might be there with Dr. Oakley but not be filming.

“Most of them say yes, and they’re okay to share it. But there’s definitely been some who are like, Absolutely not. I totally get you and understand; it doesn’t matter,” Dr. Oakley said. “It’s always, always animals first. Some of my clients, it’s too hard for them to handle the cameras, and that’s fine.”

Filming people is one thing, but the crew of Dr. Oakley, Yukon Vet has to contend with long days that stretch into longer days. And, of course, they also have to deal with wild animals, who can’t recreate scenes or fake a moment that the cameras may have missed.

“There’s no do-overs with the wildlife. The crew either gets it or they don’t,” Dr. Oakley said. For example, when she was darting bears from helicopter, there was only room for two crew members. “They better get it,” she said.

The show typically films for two weeks, and then takes a two-week break, but Sierra told me that everyone is basically always on-call.

“We never know when an animal is going to come in with an emergency,” she said. “We have our off days, we have our break days, but we’re always prepared—me and Mom and Maya are, and the crew—we’re always prepared just in case something comes in. They’ve got to be able to roll with it, and so do well.”

Viewers’ concerns, and getting things right

Dr. Michelle Oakley now lives in southwest Yukon, where she first visited as part of a project studying ground squirrels. That’s also when she met Shane Oakley, a firefighter and her future husband.

She grew up in Indiana and went to the University of Michigan, and received her doctorate in veterinary medicine from Atlantic Veterinary College in 2000.

Sharing her knowledge and being factual is important to Dr. Oakley, and National Geographic allows her to review cuts of the show—something that’s not typical for reality TV stars.

“I want to make sure that things are as accurate as possible, and I do too,” she said.

Viewers often have questions or concerns after they watch an episode, and sometimes do what people do on social media: share their opinions even if they’re not informed.

“A lot of it’s really honest questions or concerns,” Dr. Oakley said about that feedback, positive and negative.

“People are like, Well, that looked like it scared the animal. That looked like it hurt them. Absolutely: it probably did,” she added, and then explained: “This is why we had to do it that way. Yes, the dart hurts, but that’s the only way to get my hands on this animal that needs help right now. That’s actually the least-stressful way to get a vaccine into the animal instead of trying to run them through the chute and grab them.”

Dr. Oakley said, “you can’t explain all that in the moment.”

They do try, though: Dr. Oakley, Yukon Vet’s interviews are not filmed in a studio, nor are they filmed a week or two later. Instead, she gives context and information in the moment, or right after something happens.

That process can be exhausting, she said. “Can I sit down in a chair and, like, do my hair, look nice? No. They call them on the fly, OTF, and that’s what they’re doing. … They want to get the fresh response, so as much as possible, you do it then, in the moment.”

Answering questions and filming are both ongoing: When we talked in August, Dr. Oakley, Maya, and Sierra had already started filming Dr. Oakley, Yukon Vet season 7.

That future season will include some of her work with moose, which the crew hadn’t been able to film for previous seasons—and, of course, whatever animals need Dr. Oakley’s help.