Alyssa Edwards is in Netflix’s documentary series Dancing Queen, but she is not the star.

That would be Justin Dwayne Lee Johnson, the owner and operator of Beyond Belief Dance Company in Mesquite, Texas, who performs as Alyssa, including on two seasons of RuPaul’s Drag Race.

Alyssa is certainly part of the story, but mostly appears in studio interviews. Dancing Queen cuts—leaps, really, from one side of a mirror to the other—into Alyssa’s reactions, judgement of Justin (“Justin: shut the hell up”), or stories from her childhood.

It’s a wonderfully weird way of including the drag side of his life. Alyssa’s commentary doesn’t always make complete sense—Justin is by far the more coherent of the two—but the time with Alyssa is a delight to watch, as is the entire series, which gently lowers us into Justin’s life and tells us his life story at the same time.

Dancing Queen is biopic by way of reality series, lots of background and history explicated during present-day moments.

For a show starring Alyssa Edwards, it’s significantly more subdued and quieter than you might expect, even though Alyssa and Justin’s personalities are sometimes indistinguishable. 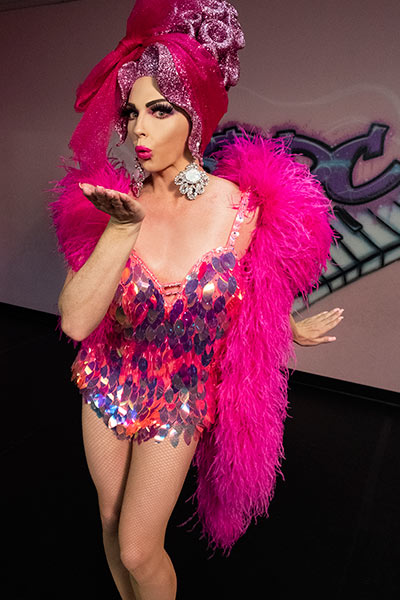 The eight-episode series, which is on Netflix Friday, is produced by Drag Race’s production company, World of Wonder, and was originally developed as a slightly different series for WOW’s digital streaming platforms.

It generally follows Justin’s life out of drag: at work and with friends. As the series opens, he’s returned from a world tour, and is auditioning students to form a team so he can “conquer this country one competition at a time.”

Dancing Queen waits until halfway through the second episode before including Justin actually teaching dance. His intensity is a surprise, even having seen him teach choreography on Drag Race, but he has a clear philosophy.

That usually comes through in exposition, and too often, Dancing Queen tells when it could show. (And the showing needs some help: The camera work sometimes captures beautiful images, but it’s oddly sloppy in other scenes, zooming in and out as it bounces up and down.)

Some exposition makes sense: Dance, Justin says, “was my way of expressing who I was as a little boy,” so he “created this place” to give other kids that same opportunity.

“They’re products of me,” Justin says of these young dancers, but the first two episodes don’t give us a chance to see much of that—to see him teaching, or inspiring.

“You allowed me to be who I am, from the inside out,” one student says. Who has she become? What did he do? The show moves on.

While the young dancers and their mothers are prominent—more prominent than Justin at the start of the first episode, even—and one mother calls herself a “dance mom,” they aren’t auditioning for Dance Moms. Phew!

He tells one parent who’s disappointed and lashing out, “Just let her cry and be upset, and then say, ‘We’re going to try again,’ because that’s the game of life.” He tells the kid, “It’s going to happen a lot of times.”

Throughout it all, Justin is holding himself and the kids to a high standard, which is connected to his desire to lift them and him above where they are.

Why he does that is what Dancing Queen is digging into, scene by scene, with a combination of anecdotes (he kept $80,000 in cash in his closet with wigs), moments from his life (a bland date, hanging out with friends), and collectable Alyssa Edwards aphorisms (“Is the juice worth the squeeze?”).

Alyssa Edwards may be famous, but Dancing Queen makes the case for why Justin is a star.