American Ninja Warrior Junior, a spin-off of the NBC summer competition series, has contestants ages 9 to 14 who will run a modified version of the course. How will it be different than the adult version, which now has contestants as young as 19?

First, some background: the new season starts Oct. 13, airing Saturday at 7 on Universal Kids—right before Top Chef Junior, which is now in its second season.

Akbar Gbajabiamila and Matt Iseman host, as usual, with Olympic gold medalist Laurie Hernandez joining them as the sideline reporter and co-host.

The contestants will compete in three age brackets:

There will be a winner in each group.

The show filmed in July, and like USA Network’s American Ninja Warrior: Ninja vs. Ninja  (the show previously known as Team Ninja Warrior), the course is actually two courses side by side. It’s also filmed during the daytime. 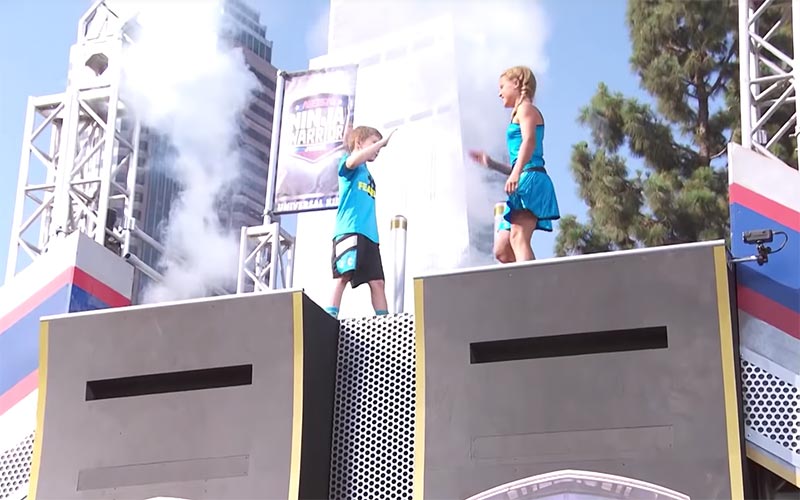 The American Ninja Warrior Junior warped wall, as seen in a preview for the new spin-off show, has notches that will be opened based on the ages of the contestants.

Kids will run a six-obstacle course, with the same obstacles as the adult version—just “they’re just scaled down just a little bit for the different heights and the different sizes of the kids we’re dealing with,” according to executive producer and director Kent Weed.

In the video below, he walked through the course’s six obstacles—apparently the ones that will be used during the qualifying rounds, as the preview for the season shows kids tackling different obstacles, including Spin Cycle.

The six obstacles Weed discussed are:

“American Ninja Warrior Junior celebrates a kid-centric movement that everyone can be a part of and enjoy together. Kids are already deeply connected to the primetime American Ninja Warrior on NBC—young people across the US have been caught up in the spirit of this incredible show and they’ve been asking for the opportunity to get more involved. Now they can.

American Ninja Warrior Junior is fun and inclusive. It’s thrilling to watch but has incredible heart—Matt, Akbar and Laurie capture this feeling so well. This show will encourage and inspire all kids to push their limits and not shy away from challenges, because there is always success in trying. Arthur, Kent and their talented team at A. Smith & Co. have built American Ninja Warrior Junior to be something truly special for audiences, from the course design to casting. They’ve embraced the show’s youngest fans with total respect for who these kids are and what they can do.”