There’s nothing on television like the beginning of a season of Survivor: the dramatic aerial cinematography of Fiji; the quick zooms and the slow-motion images of water droplets flying through the air; the extreme close-ups of the cast members, intensely focused and exerting effort.

Those images opened Survivor David vs. Goliath and gave way to a premiere episode that had more character development than perhaps all of Ghost Island, plus some new experiments in editing and production, such as camera shots from drones that hovered over the tribes’ beaches—cool, though a bit disorienting since those were angles I’m not used to on Survivor.

The episode had truly fascinating contrasts in tribe dynamics: the Goliath tribe arguing and yelling and competing against each other, while the David tribe shivered in the rain and shared stories.

MMA Fighter Bi revealed that she was in an abusive relationship “where he beat me every day,” and she shared that story to comfort Jessica, who revealed that her mother’s abusive relationship meant that Jessica “had to be the mom.” Bi assured her that “she saved her mom’s life.” Later, Nick disclosed the drug addiction that took his mother’s life.

There was vulnerability and depth—and the usual grating on each other’s nerves.

Mike White screwed himself with an idol hunt at the Goliath tribe; Natalie couldn’t stand watching the kids screw up, so she started telling them what to do; and Nick was so excited to be on Survivor and name his alliances that he didn’t notice how much he was annoying Carl and Pat.

We had an idol hunt edited like no other: the Goliath tribe’s idol’s discovery was revealed in flashback, after Dan revealed that “it’s in my pants” and pulled out an idol that looked way too much like two testicles on a string. While Jeremy told us that, “On TV finding the idol is easy. In real life, it’s a needle in a haystack,” Dan found the idol sitting on top of a rock.

Dan’s primary concern was not having discovered that advantage, but his blooming showmance with Kara (“showmances screw you so hard”; “there’s many people who found love on Survivor, so why not me?”;”You just kiss me in secret”). Actually, it was just her physical beauty, and Angelina’s, too: “I found an idol with the most beautiful girls in this whole entire game right now.”

Moments earlier, Angelina explained that just 15 percent of idols are found by women, and now here she was being reduced to an attractive sidekick for a man who found an idol.

So, yes, there’s was a lot to digest and enjoy. But let’s discuss what came at the beginning and end of the premiere, because they’re the parts that linger. 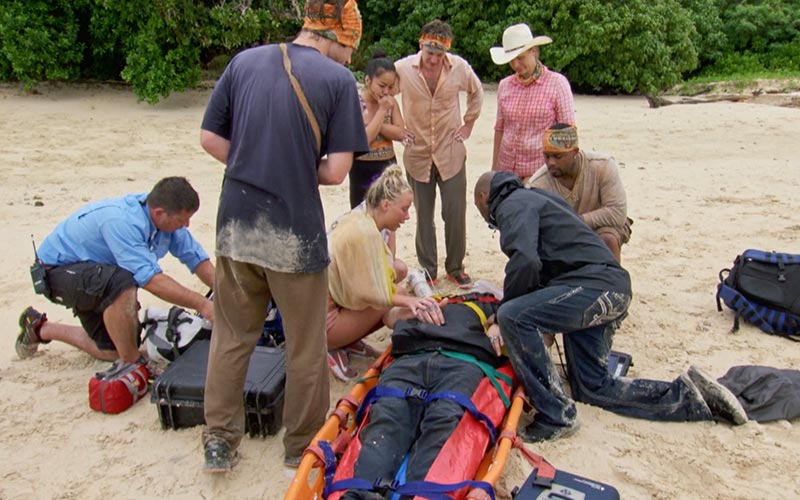 The David tribe says goodbye to Pat Cusack before he was airlifted to a hospital on the Survivor David vs. Goliath premiere, “Appearances Are Deceiving.” (Image by CBS Entertainment)

The end of the first episode of Survivor David vs. Goliath will probably remain the most memorable part of the episode, for so many reasons: a surprise and severe injury, and then a lack of a Tribal Council.

Around 75 minutes, the show came back from commercial with dramatic shots of waves that just seemed like more gorgeous b-roll to illustrate the stormy conditions. But then there were crew members carrying a stretcher with Pat on it, and Pat was convulsing and writhing in severe pain.

As Gabby explained in an interview later, “The boat slams down on one of the waves” and “we hear a crack.” (Pat’s back?)

Some background: When Survivor cast members are transported from one location to another—their camp to Tribal Council, or a challenge location to their camp—they’re not allowed to talk, nor are they filmed. They’re in vehicles with their windows blacked out (for seasons filmed on land) and boats (in Fiji and other island locations), so it’s disorienting, hot, and not that much fun to begin with.

After the commercial, Pat was still in horrible shape, but managed to say things like, “You can’t take me. I can’t leave,” “it can’t end this way,” and “not this way.”

The good news about Pat didn’t come until the very end of the episode, after the credits and the preview for episode two: A message on screen said “Pat was treated for his injuries and has made a full recovery.” But there were no other details.

While there was not time to explain what actually happened to Pat, nor did Probst offer details in his EW Q&A (describing it only as pain and “trouble walking”), there was time to make sure every player and viewer remembered what this season is all about.

As the helicopter departed, Jeff Probst walked over to a grieving, shocked tribe and said, “Of all the tribes for this to happen to, it’s the David tribe. You are constantly thrown an obstacle every day.”

That—well, it made me angry. That was not the time nor the place to hit a story point or keep producing.

Maybe that’s something to mention later, when the tribe recovers. This was a time for old Jeff Probst, the host who was the audience’s surrogate and would respond with empathy instead of exposition.

The show’s medical team was taking care of Pat, but there needs to be concern for the remaining contestants too, and that just seemed like the wrong priority in that moment.

Think about what they’d just experienced: They were doing something so benign and routine that it’s not even filmed—and that’s when one of their tribemates was so severely injured he had to be removed from the game and flown away. Would he die? Did he have a broken spine and would be paralyzed for life? They didn’t know.

So instead of hammering home the arbitrary tribe division and artificial storyline that’s being blanketed over the season, maybe just comfort them? Or listen? Or give them some time?

Jeff Probst made sure no one forgot the theme 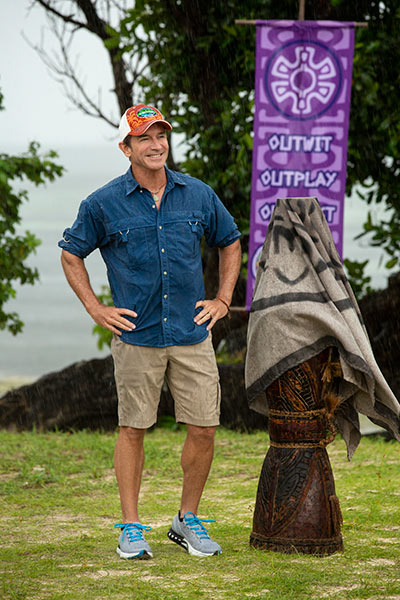 Host Jeff Probst during the premiere of Survivor David vs. Goliath

With that, Survivor season 37 ended its premiere with the way it began: with Jeff Probst talking. At the beginning, those beautifully composed and edited images of Fiji led to Probst on a boat, where he talked. And talked more. And kept talking. For about 10 minutes.

He was hammering home this season’s theme, which is even thinner than previous themes that involved separating people into completely arbitrary categories.

“It’s not who has the advantage, it’s what is the advantage. That’s the theme that we’re going to explore this season,” Probst said, sounding like a podcast host who talks about their podcast instead of just doing a podcast.

Though the season is named after a Biblical fairy tale, it seems more about privilege. But that definition fell apart so fast the Goliaths were protesting that they, too, were hard workers, and because Survivor really isn’t interested in exploring privilege, just exploiting it for a moment, like when Probst forced Alison and Pat to compare their backgrounds.

So is the theme weak versus strong, smart versus dumb, privileged versus underprivileged, or advantages versus lack of advantages?

The opening challenge was meant to illustrate one of these, but it was more talking than action, with Probst giving the both tribes decisions to make: Goliaths chose their strongest two players, and the (perceived) weakest two Davids, while the Davids decided which obstacles each pair would tackle.

I admit that I thought choosing the slide puzzle was a huge mistake, but it turned out Christian was a secret slide puzzle genius, and so the Davids easily won.

As Gordon Holmes tweeted, “WHAT IS THE LESSON? That weak Davids can beat strong Goliaths if the Goliaths are forced to make bad decisions?”

The win was thrilling and well-deserved, but just further served to illustrate how nonsensical the theme is.

In an episode that experimented with editing in new ways, perhaps the most confounding decision was why the editing mocked the David tribe before and after their challenge victory.

First we saw the tribes climbing onto the boat: the Goliaths leaping over the side like they’d pole-vaulted, and the Davids struggling like they were pulling themselves up icy stairs with their feet tied together.

And then there were flashes of Christian explained how he solved the slide puzzle, indicating that he was rambling. In another context, I can see that editing working, but it just felt like shitting on someone who’d just pulled off a victory.

Are we going to just mock the weakling losers when they win? Until they cut off the other tribe’s head and become an adulterous king? Why bother with this narrative at all?

The rest of the Survivor premiere—from the emotional conversations to the medical evacuation, the teamwork to the conflict—proved that the strength of Survivor’s core is still alive and well, and doesn’t need to be blanketed with nonsense for it to be entertaining.