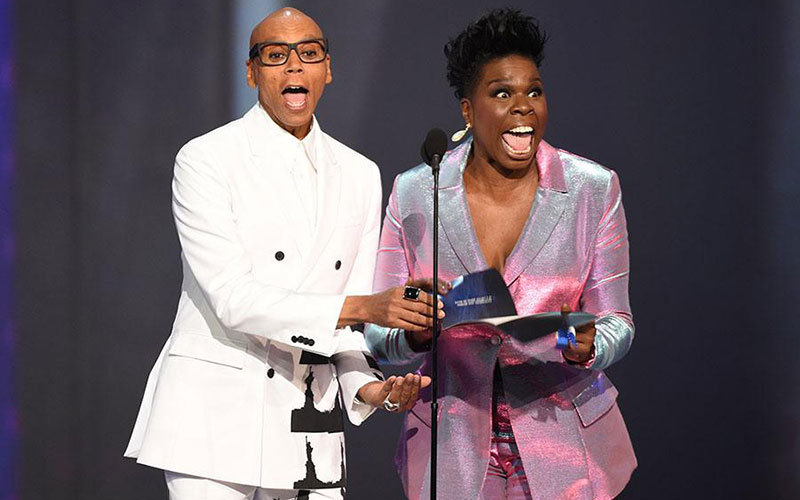 RuPaul Charles and Leslie Jones present the Emmy for outstanding lead actress in a limited series to Regina King. (Photo by Invision/AP)

That brings the show’s total to five Emmys this year: RuPaul Charles also won the Emmy for reality competition host, and the show won Emmys for directing, hairstyling, and costumes.

“Thank you so much. This is so lovely,” RuPaul said, with Michelle Visage, Ross Matthews, and Carson Kressley on stage with him and a gaggle of producers.

“We are so happy to present this show. I would like to thank—on behalf of the 14o drag queens we’ve released into the wild”—and then he listed several producers, network executives, and others.

He ended with one of his familiar catchphrases, although it took on a bit of new meaning in the context of an award show that plays music to nudge award-winners from the stage:

“…all of the dreamers out there. If you can’t love yourself, how in the hell are you gonna love somebody else. Can I get an amen up in here? Now let the music play.”

And given that flawless cue, the Emmys did not play any music. 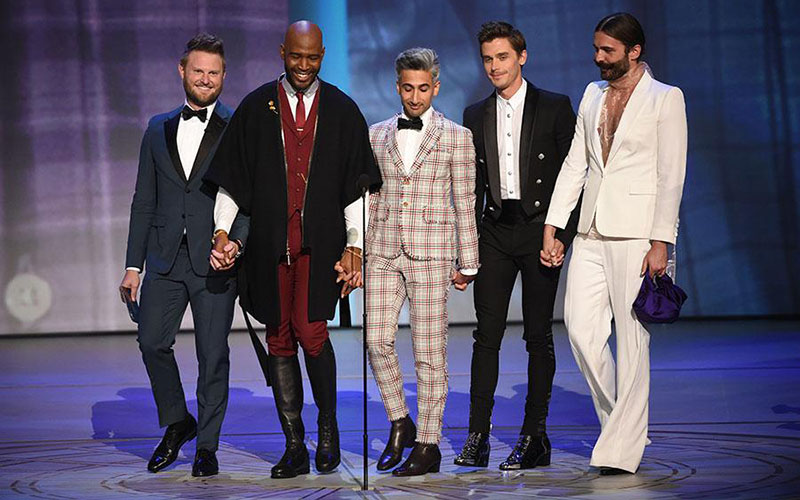 The stars of the Emmy-winning Queer Eye reboot presented an award at the 70th Primetime Emmy Awards. (Photo by Invision/AP)

This was a well-deserved win for Drag Race, which had a strong season that even included contestants challenging and debating its host. (And it was wonderful contrast from a weak RuPaul’s Drag Race All Stars season 3.)

Considering the series’ effect on culture and its messages of inclusivity and self-acceptance, it’s remarkable that the show itself didn’t win an Emmy before tonight.

Then again, this is the Television Academy, which likes to keep giving awards to the same show, even when it’s nowhere near as strong as the competition, and that’s been especially true in the bigger reality TV categories.

Also, the Academy’s members seem to not really watch or care about unscripted TV all that much, or perhaps it’s just general disdain for reality television. Adding some evidence of that tonight: the reality competition Emmy was presented by not by some of the many A-list TV celebrities who were there, but by animated characters, Rick and Morty.

Still, the Television Academy’s voters did decide to change up what they’d been doing before in this category, and it’s a welcome change.

This is only the fourth show to win the reality competition Emmy in the 16 years the award has existed. The Amazing Race won 10 times, The Voice won four times (including the last three in a row), and Top Chef won once.

Drag Race was previously nominated in the category back in 2011; RuPaul has won the Emmy for outstanding reality show host the past three years.

During the telecast, the stars of the newly Emmy-winning Queer Eye reboot presented the Emmy for lead actor in a drama to Matthew Rhys for The Americans.

Awards in all other reality TV categories were presented at the Creative Arts Emmys last weekend. Browse the list of winners, or see all the reality shows that were nominated for Emmys and all of the shows and hosts that were eligible.