Colton Underwood is the star of The Bachelor season 23. Who it is really does not matter.

Colton, ABC claims, “was best known for his candor when speaking about his virginity and had America standing by him,” and “was hopeful” on Bachelor in Paradise, where Colton “found closure with former flame Becca Kufrin; clarity with Bachelor Nation favorite Tia Booth; and above all, an unwavering desire to find the woman of his dreams.”

The key part here is that he appeared on the last two Bachelor franchise seasons, and that he has abs. Nothing else matters.

I started to write about how ABC has once again chosen a bland white man, terrified of angering their racist fans who turned against The Bachelorette when she was a black woman. But then I realized I’d just be contributing to the outrage that proves the network and producers made the right choice.

What I mean by “right choice” is not “the best possible star for a franchise allegedly about finding true love in the most over-produced setting imaginable.”

No, what I’m referring to what matters to ABC and production studio Warner Horizon. And what matters to them is that the person they’ve cast as their star does two things:

Bonus: The person is a bland blank slate onto whom Bachelor Nation can project their own desires, hopes, and dreams.

The criteria definitely has nothing to do with love, or deservedness.

After all, let’s not forget that ABC and Warner Horizon literally just cast someone on The Bachelorette who was charged and then convicted of assault and battery. Their crew filmed two people drunkenly having sex. And the second Bachelorette says she was sexually assaulted during production.

They don’t give any shits, as long as what they do causes people to react and watch, which generates profit for Disney. (Disney!)

A soap opera gone off the rails 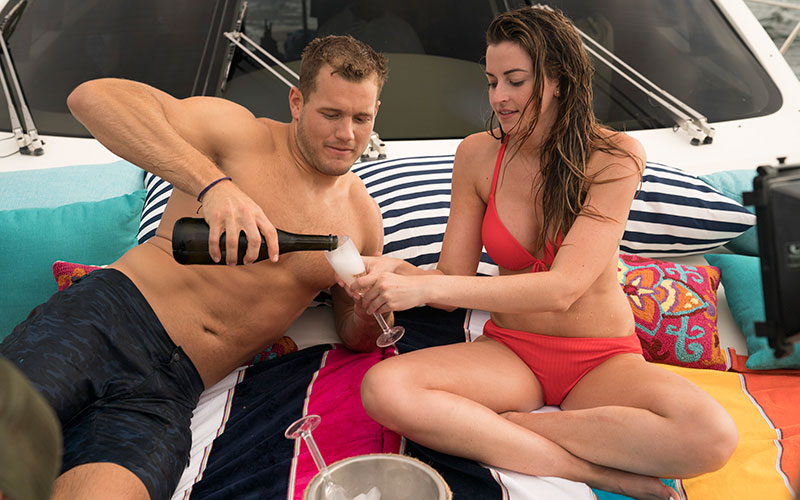 Colton and Tia in the premiere of Bachelor in Paradise season 5. (Photo by Paul Hebert/ABC)

When The Bachelor and The Bachelorette started casting people from previous seasons as their stars, it changed the show. Instead of one-off seasons, there was now an ongoing story, compelling people to keep watching.

Bachelor in Paradise added a more unstructured context in which storylines could play out and develop, fueling the franchise.

That was a smart decision, and gave the franchise new life—and kept it alive a lot longer than it might have stayed otherwise.

Perhaps that process was never was truly organic, but now, it feels more forced than ever.

I don’t think anyone sat down and wrote that storyline, cast it, wrote dialogue, and then directed scenes.

But I do think the Bachelor’s producers are smart enough to identify, exploit, and then produce the hell out of any such fragments that emerge. And then fans buy into the storylines without noticing or caring that the strings attached to the puppets.

The Bachelor has done that perfectly with Colton, and the I’m never watching again! claims on social media just confirm that producers made a good choice.

If The Bachelor had cast Blake or Jason, or brought back Nick Viall for a 75th chance at love, there would have similar freak-outs, though the details may have been different.

Reality Steve made this point when he revealed, last week, who the show had cast:

“I get that not a lot of people are happy, which is standard every time there’s a ‘Bachelor’ announcement. Uhhhhh, may I take you back to Sept. 7th last year when Arie was announced and the uproar that caused? Look, I don’t care that Colton is the ‘Bachelor.’ Whatever. Do I think it’s a great choice? No. But it’s not my choice to make and I kinda see why they did it. I just don’t think he’s great TV. But again, this show is made by the casting of the women, not the lead, so they’ll be fine no matter how many people bitch about it. They bitched about Nick, they bitched about Arie, they’re bitching about Colton. It’s par for the course.”

Yep. Even the most generic of choices doesn’t matter, because all that person has to do is allow themselves to be a blank slate onto which more exciting things can be dumped by the producers, like a scoop of vanilla ice cream waiting for toppings so it can become a sundae.

They may hear, but they don’t care—unless you stop watching. And season after season, bachelor after bachelorette after bachelor, Bachelor Nation has proven it’s willing to show up.

Just not for a black woman.