“I understand on this show we’re going to say goodbye to somebody every week, but in real life if someone disappeared every week that would be terrifying. It would be national news,” Making It judge Nick Offerman joked in the show’s third episode. “Let’s just not do it.”

Not eliminating anyone is actually an excellent idea, and the one change I’d like to see for Making It season two. At the very least, the show needs to start over with its judges, because the judging was one flaw in a near-perfect first season.

As I wrote in my original review of Making It, I don’t think the judging problem is entirely the fault of Dayna Isom Johnson and Simon Doonan; they seem to have impossible jobs. And there were enough non-judging, off-the-cuff moments when they each fit right in.

Simon Doonan in particular is frequently witty and playful, not quite matching hosts Amy Poehler and Nick Offerman—who can possibly match improvisational comedy royalty?—but at least in the same universe.

Yet his judging was too often dour and persnickety.

In the second episode, Khiem created a terrarium that depicted a moment in his relationship, when he and his girlfriend visited abandoned highways in Connecticut.

Now, Khiem’s on-screen presence was so dry and solemn in a way that it’d make Wednesday Addams seem like Kimmy Schmidt emerging from a pool full of kittens and sunshine. And the colors from Khiem’s early work this season could have been packaged together and sold as Crayola’s Melancholy Markers.

But still, this was clearly a moment that brought Khiem a great deal of happiness, and the emotion was there, as we could see from Amy Poehler’s reaction.

Judging it, though, Simon said that the piece made him think of suicide: “Don’t jump!” he exclaimed.

It was intended as a joke, sure, but he could have dumped the terrarium into the trash can and the mood would have been lighter. Here was a thing someone made with their hands to evoke a memory of love and connection, and here was someone mocking it.

Dayna seems to be getting the brunt of the judge criticism, and that’s probably because no one cares about Etsy trends, and she sure has a lot of Etsy trends to share.

Actually, I’m sure some people care about Etsy trends, but does anyone care about them in the context of this show?

Does it add any information or insight? Or does it just seem like awkward product integration? It may be Dayna’s expertise, but always seems to just fall into the scene like a dead bird landing on a picnic.

Imagine Mary Berry tasting a tart and then saying, Oh, this has a delightful crunch, and we’re seeing quite a bit of crunchiness these days on Pinterest!

Together, though, Simon and Dayna are just picky in all the wrong ways. They get disappointed when the artists don’t do things that no one told the artists to do. Sometimes the judges want perfection; other times they savor messiness.

There are no clear standards to work from. What are the criteria? How do you even compare these various kinds of crafts when they use entirely different materials?

Why are there even judges, except to stick to a typical reality TV competition elimination format? I’m not sure this show needs judging at all.

Why critique what people create? writes the TV critic shitting all over two people’s work on summer’s most joyful reality show.

What if Making It tried a different format? 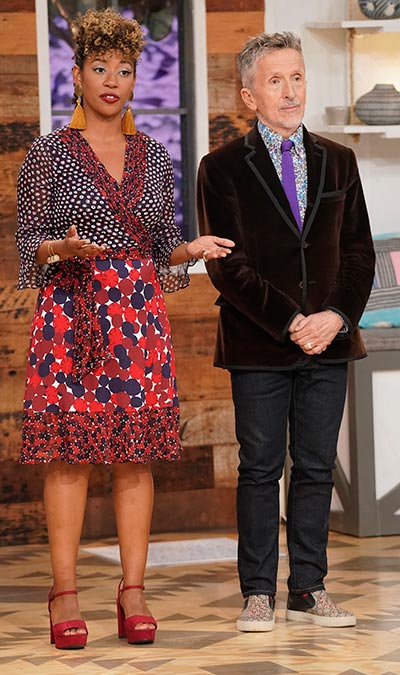 In an interview with House Beautiful, Dayna says that she and Simon “wanted to make sure makers were taking risks and stretching outside of their comfort zones. I wanted people to challenge themselves and the talents they already had.”

Those are worthy and decent goals—for mentors. Not judges.

Judges need criteria they can apply to the work. Demanding that a person challenge themselves is a tough ask, or at least, a tough thing to judge, because that’s not in the work itself, that’s in the person.

And judging a person’s effort gets us nowhere; there’s a lot of art in the world, from movies to things on Etsy, that have taken a lot of time but just aren’t very good.

What I’d rather see the show do, however, is demonstrate some of the same kinds of creativity as its contestants, and rethink its conventional, safe format.

There is still plenty of time to make major changes: The casting application says that season two will be filmed over “five weeks during the period of February through September 2019.”

Why not keep all the contestants around, and just award them patches and give the cash to whoever has the most patches at the end? Or just define some clear criteria for each challenge and have the judges give numerical scores? Or try something better, not an idea I just came up with in four seconds.

I definitely would not want to see Amy Poehler and Nick Offerman doing any kind of judging, as it would disrupt their playful camaraderie with the contestants. Sometimes they get disappointed, like they did with the snack stadium challenge’s lack of snacks, but that happens as an aside, not as a central part of the show.

Right now, the judging slams the breaks on the show until our foreheads bounce off the seats in front of us and the fun can begin again.

There’s so much delightful creation on Making It, from the crafts to the puns, and maybe, just maybe, that’s good enough.