Julie does not usually refer to herself as “Julie Chen Moonves.” Even at the beginning of the episode, she introduced herself like this: “Good evening, I’m Julie Chen. Welcome to double eviction night.”

Tonight’s episode was her first appearance on live television since her husband, the former CEO and chair of CBS, was forced to resign in the wake of sexual assault and harassment allegations from multiple women who say he not only harassed and/or assaulted them, but ruined their careers.

He resigned on Sunday, and she did not appear on The Talk Monday. Instead, she released this statement:

“I am taking a few days off from The Talk to be with my family. I will be back soon and will see you Thursday night on Big Brother.”

The Big Brother 20 double eviction episode was a typical live episode, rife with technical problems. Julie was often reading from a script on a prompter, but also interviewed two evicted contestants.

While she did not directly address her absence or what has been happening at CBS—where Moonves’ exit was followed by the executive producer of 60 Minutes being fired yesterday—saying her husband’s last name seemed to be a clear sign of support for him.

When the New Yorker published its first story with allegations back in July, Julie released this statement:

“I have known my husband, Leslie Moonves, since the mid-90s, and I have been married to him for almost 14 years. Leslie is a good man and loving father, devoted husband and inspiring corporate leader. He has always been a kind, decent and moral human being. I fully support my husband and stand behind him and his statement.”

On Sunday, The New Yorker’s Ronan Farrow reported six new women’s “claims that Moonves forced them to perform oral sex on him, that he exposed himself to them without their consent, and that he used physical violence and intimidation against them.” 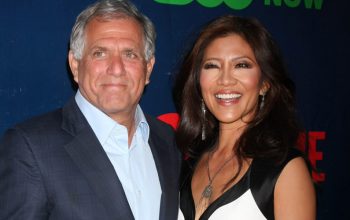 Yesterday, Designing Women creator Linda Bloodworth Thomason wrote in a piece for THR that “I was never sexually harassed or attacked by Les Moonves. My encounters were much more subtle, engendering a different kind of destruction.” She discusses examples of “his highly successful and truly immoral, bullying, misogynist reign,” and how that affected her career.

Yesterday, in a story full of behind-the-scenes details, The New York Times reported that “Moonves used all his persuasive charm to reassure shocked directors that, while there may have been a few episodes with women in his distant past, others mentioned in the article were ‘grossly overstated’ or simply false.” One person on the board of directors said, “I don’t care if 30 more women come forward and allege this kind of stuff. Les is our leader and it wouldn’t change my opinion of him.”

But the board turned on him when they found out, as the New York Times reported, “that one of Mr. Moonves’s accusers was threatening to go public with her claims. Instead of reporting the situation, Mr. Moonves was in the process of trying to find the woman a job at CBS in order to gain her continued silence.”