Julie Chen quit one of her two CBS jobs this week, leaving her daytime talk show The Talk, which she’s been on since it premiered.

She’s been on Big Brother 20 this week and last, using a new name, but will she remain after this season, which concludes next week?

Despite some ludicrous theories online, the apparent answer is yes—at least for two more seasons.

Deadline reports that Julie’s “contract runs for the next edition of midseason spinoff Celebrity Big Brother in early 2019 and one more season of the mothership show.”

And its story adds that Julie “wants to keep her 18-year gig hosting the reality competition series” and “will continue to work on Big Brother and looks forward to hosting the show for years to come,” according to Deadline, which cites “sources close to Chen Moonves.”

That sounds like she wants to stay, since this is clearly coming from her people. Because it’s phrased in a way that suggests she’s happy and delighted and really wants to keep hosting, it also hints at the possibility that her future as Big Brother host is not so certain (i.e. please don’t fire me).

That said, citing “insiders,” Deadline reports that “the consensus at the network is to keep Chen Moonves on both the now-auditioning Celebrity Big Brother and Big Brother itself next year.”

In other words, it seems likely she’ll stay at least through her contract and the end of Big Brother 21.

Perhaps that’ll quiet some of the ridiculous, though amusing, theories.

A Twitter account operated by the one-season 2012 ABC show The Glass House, which was similar enough to Big Brother that it resulted in legal action, tweeted for the first time in years this week, saying it was “rebooting” and commenting on a “hostname error”:

That prompted some to speculate that it was linked to Julie Chen, and that she’d abandon CBS to host a revival of The Glass House on ABC, which makes pretty much no sense, starting with the fact that The Glass House didn’t have or need a host.

Also, it was cancelled, and though many of us enjoyed it, it was not a series that people are clamoring for—though I’d love to see a second season of it, and stranger things have happened in Hollywood.

That said: Is The Glass House potentially returning, or is someone with access to its Twitter account just having some fun, especially with the speculation that action created?

Julie quit The Talk; can she stay with CBS? 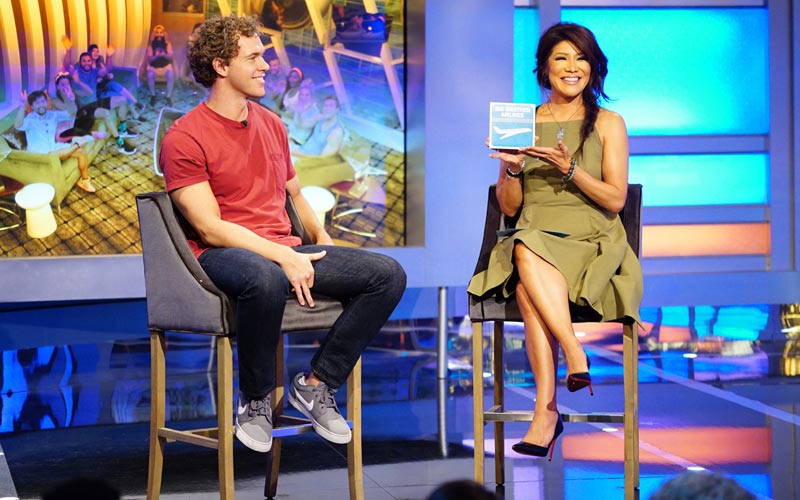 Since her husband, CBS CEO Les Moonves, was forced to resign almost two weeks ago, Julie has been on Big Brother, but never returned to her job on The Talk, which she officially quit this week.

In a pre-taped message that aired on The Talk Tuesday, Julie said, according to CBS News:

“I have been at ‘The Talk’ since the day it started nine years ago, and the cast, crew and staff have become family to me over the years. But right now, I need to spend more time at home with my husband and our young son. So I’ve decided to leave The Talk. I want to thank everyone at the show for our wonderful years together. I will always, always cherish the memories we shared. Most important, I want to thank you, the viewers, for allowing me into your home every day. It was a privilege that I will forever be grateful for. To everyone behind the scenes … I send you my love. I will miss you all very, very much.”

After that message—filmed on the set of Big Brother—was broadcast, CBS said in a statement:

“For eight seasons, Julie Chen has co-hosted The Talk with incredible energy, grace and professionalism. Her talents played a big role in our successful launch of CBS’ first network daytime talk show, and in the series growth into an Emmy Award-winning broadcast. All of us here have tremendous appreciation for the dedication and passion she brought to the show every day and for her generous role as an ambassador for CBS Daytime. We are grateful for her many other contributions, respect her decision and wish Julie all the best in everything she does.”

Also, The Talk is very different than Big Brother—more personal, more topical, far less scripted, and its hosts discuss and argue over current events and issues in the news (issues like, say, accusations of sexual assault and harassment by the CEO of a major corporation).

Staying in those conversations opens her up to even more accusations of hypocrisy and complicity.

By contrast, it’s much easier for her to be on Big Brother, where she’s mostly reading scripts from a teleprompter, whether she’s presiding over competitions by presenting the rules and asking questions, or narrating the live voting process.

Julie is most unscripted when she’s interviewing houseguests, and those interviews just have to do with game play, and that doesn’t present the same kind of potential conflict of interest.

Julie’s work with Big Brother requires less time: just one night per week, not an hour every day. She’s also the public face of Big Brother, while she was part of an ensemble on The Talk.

As always in Hollywood and in life, anything is possible, but I think we can expect that Julie will be around on Big Brother for at least the next year, just as Big Brother will undoubtedly be back, too.

This is CBS’ summertime cash cow, and the network’s programming executives are probably not going to disrupt that by cancelling it or dropping its host.