Skip to Content
Heidi Klum and Tim Gunn on Project Runway season 12. They won't appear on the show any more; season 16 was their last. (Photo by Barbara Nitke/Lifetime)

Project Runway host and judge Heidi Klum and mentor Tim Gunn are officially leaving the series after 16 seasons, and will be instead teaming up for a new fashion competition reality show at Amazon.

Their departure is shocking but also seemed inevitable ever since Bravo picked up the show from Lifetime, and has not once mentioned their names in connection with the series.

This considerably dampens excitement over Project Runway’s future on Bravo, where it was going to be once again produced by Magical Elves. Will the show even continue without them?

“Bravo is proud to bring Project Runway back where it all began, and Heidi and Tim will always be a huge part of the legacy. The series will continue its iconic impact with Bravo’s reboot for the next generation of designers and fans. We are excited to announce our new host and mentor very soon.”

Trying to fill Tim Gunn’s role will be especially difficult, as he’s been at the show’s center since the beginning, and he’s also been a key part of Project Runway Junior, though he was not on Project Runway All-Stars. 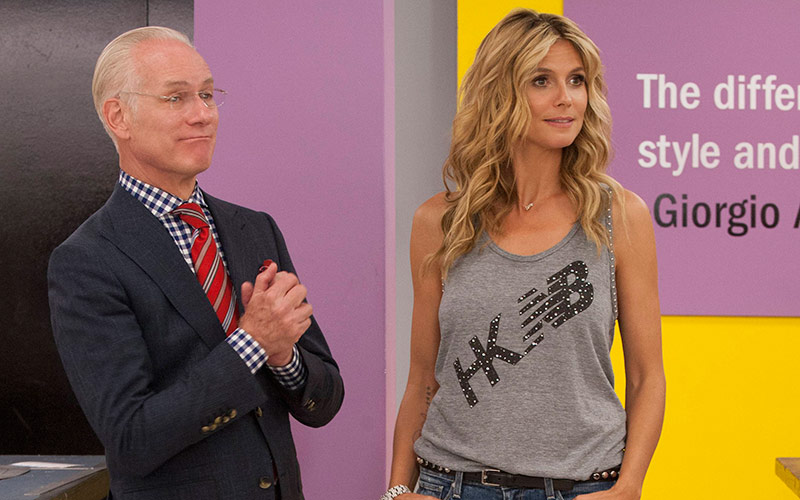 Amazon announced that “Prime Video and Amazon Fashion will collaborate to bring a shoppable experience to viewers of the series”—which probably means you can buy the fashion from the show on Amazon.

Amazon called the new show “a fresh take in the reality space and will appeal to a global audience who are entertained by competition, storytelling, and authenticity,” and said “this intersection of content, commerce, and technology is perfectly suited to the cord cutter generation and streaming consumers.”

“Heidi Klum completely changed the television landscape by developing a competitive reality fashion series that was unproven and different from what was popular on-air. The show became wildly successful, and in turn Klum and Tim Gunn have become an iconic pop culture duo. Their drive to deliver fashionably entertaining, engaging and trendsetting content speaks for itself, and we believe their next iteration in this space will find an even larger audience on our global Prime Video runway.”

In the press release, Heidi said:

“After 16 incredible seasons, I am saying ‘Auf Wiedersehen’ to Project Runway, a show that I was honored to host and help create. I am incredibly proud of the show, and it will always have a special place in my heart. I am so appreciative of the dedicated fans, and most of all, I am grateful that we could shine a light on creativity and help launch so many talented designers’ careers. I’m most excited that my journey with my dear friend and colleague, Tim Gunn, is far from over. We will be partnering with Amazon for a new show, and we’re excited for everyone to see what we’re designing next!”

“I am grateful to Project Runway for putting me on a path I never, in my wildest dreams, thought my career would take me! I am so proud to have been a part of the groundbreaking process that showcased talented young designers as never before. Most importantly, I am indebted to our incredible fans, they are the heart and soul of what we do, and continue to inspire us to raise the bar in this arena. I’m excited for them to see what’s next, as I partner with Amazon and Heidi Klum on our next great ‘fashion’ adventure.”