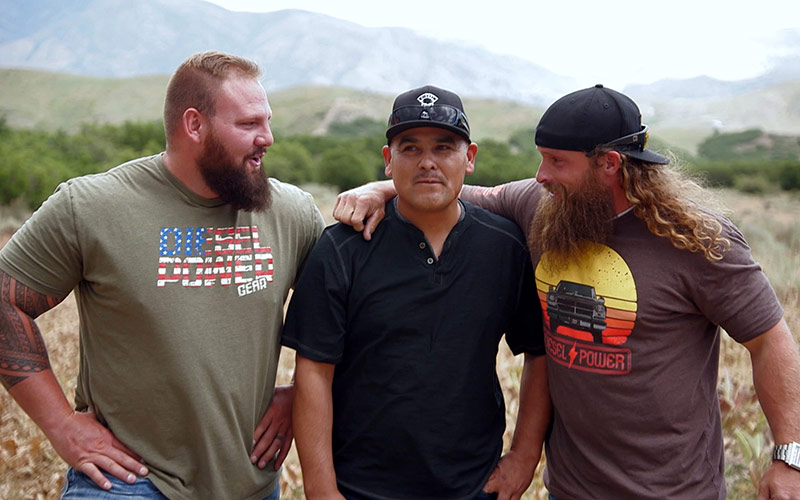 The Diesel Brothers with Jose Caballero during the season 4 episode in which they overhaul Jose's truck after he was harassed in a viral video. (Photo by Discovery)

During Memorial Day weekend, a family’s truck broke down at Blacksmith Fork Canyon in Utah. The truck and trailer were blocking access to a campsite, and the family—including two parents and two kids, ages 8 and 15—were then assaulted, harassed, threatened with violence, and verbally abused by a group of people, some of whom had guns, over several hours.

The owner of that truck, Jose Caballero, will get help from Diesel Brothers and the Dieselsellerz team, including Heavy D and Diesel Dave, who saw the confrontation in a video that went viral and reached out to help.

On June 2, Heavy D posted a video to Facebook with the caption “Sorry about the rant but I had to vent about this cause I’m pissed.” In the video, Heavy D says the incident involved “a lot of racism, a lot of hate, and a lot of stupid people,” and also blamed bystanders:  “Shame on you. That is disgusting, repulsive behavior.”

“We’re not all like this here in the United States and in Utah,” he added, and said “I want to fix it … I want to build your truck for free, because I want to give you an opportunity to take some good away from this terrible situation—traumatic situation—that you and your family went through.”

The result of that will be featured on Monday’s season four episode “Yes Way, Jose” (Discovery Channel, 10 p.m. ET). Watch this preview, which includes the reveal of the rebuilt truck:

In the viral video of the confrontation, Wyatt Dee Pack, 20, berated Caballero at one point, insisting that broken power steering wasn’t a problem and saying, “I’m a fucking diesel mechanic for Weber County. I know that you’re fucking stupid.” (He was later fired from his job with the county.)

Wyatt’s eventual offer of help came with a demand for all of the cash the family had, which was $40, and in July, Wyatt was charged in court “with inciting a riot, a third-degree felony; threatening to use a weapon during a fight, a class A misdemeanor; and four other misdemeanor crimes including assault and theft by extortion,” The Deseret News reported. 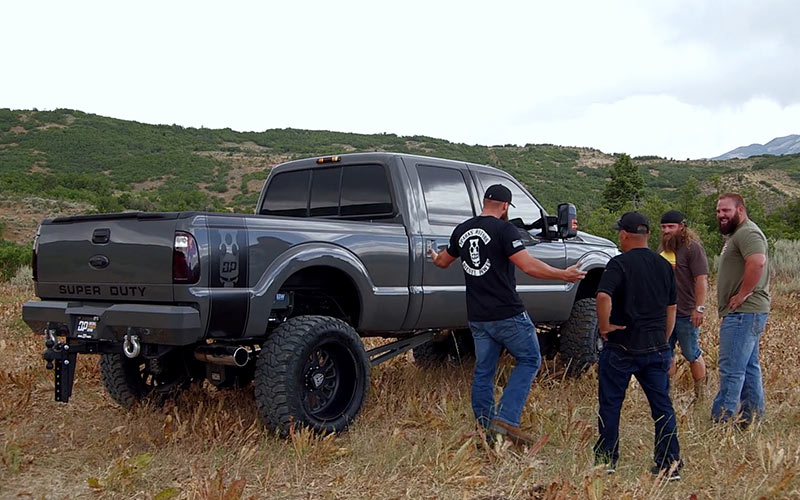 The Discovery Channel said in a press release that the Sept. 10 episode “picks up on the headline-grabbing viral video of a Hispanic family peppered with insults after their vehicle breaks down in Northern Utah.”

Here’s how Discovery describes the episode:

“The fun-loving, truck-building men of Dieselsellerz are known worldwide for their crazy online videos and their incredible, over the top diesel builds. Their truck giveaways are the stuff of legend, and this week they’ll be giving a total truck overhaul to a local dad who was extorted and harassed with his family at a campsite when his F350 broke down. And the guys put together the shop’s first-ever diesel Motorcycle, a steampunk dream with a Magneto!”

In unrelated news, last week, one of the Diesel Brothers’ friends and employees, Mikal Wersland, died.

Heavy D wrote on Facebook that Mikal “died in a freak drowning accident over the weekend and honestly my brain doesn’t really know how to believe it cause I always viewed this monster of a man as indestructible.”

The Diesel Brothers announced that, as Salt Lake City’s KSL reported, “all proceeds from their ‘Thin Blue Line’ gear would go toward paying for funeral costs and supporting Wersland’s family.”