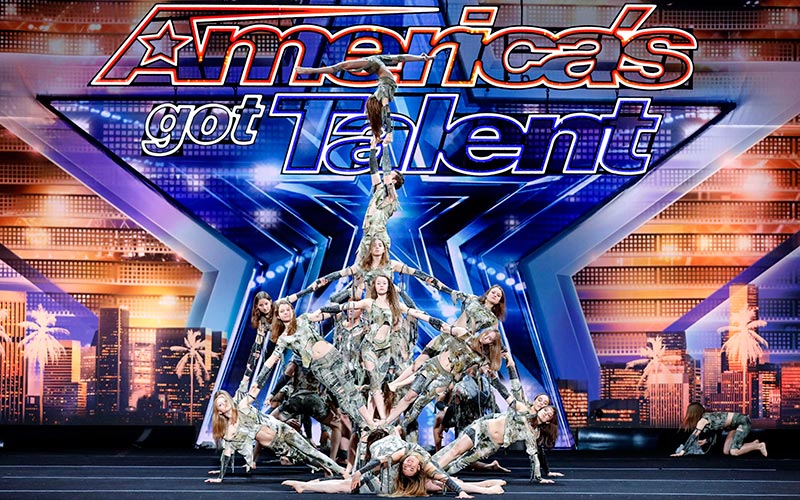 The Austrian group Zurcaroh auditions for America's Got Talent season 13. They previously received a golden buzzer on France's version of Got Talent. (Photo by Trae Patton/NBC)

I caught the end of the America’s Got Talent Season 13 premiere. The final act, Zurcaroh, was very impressive. It managed to earn adulation from all four judges and ultimately the Golden Buzzer from Tyra Banks with “This Is Me” book-ending from when it played at the start. I went to their homepage via their Twitter handle to learn more about them. It was there that I saw they earned a Golden Buzzer and [became] eventual finalists for France’s version of AGT. It was also stated that they are based in Austria.

I don’t deny that they put on a wonderful performance. I’m just wondering how they could be eligible for a show that seemingly advertises to find talent in the US. I could admit to myself that they should be there if all but the troupe’s founder were from the US “branch” somewhere but searching didn’t lead to that conclusion.

I admit that I haven’t watched the show in some time but their inclusion seems to break the premise for the show itself. One possible conclusion that they were invited by the production company to audition (which you have previously written about). I don’t doubt the reactions from the judges, Tyra, the attending audience, and the viewership. But doesn’t mean the producers ultimately took one of five Golden Buzzers away from a US-based act? —Scott

America’s Got Talent season 13 has its finals next week, and Zurcaroh—an Austrian group that previously appeared on La France a un incroyable talent season 12 last year—will be one of the top-10 acts competing for $1 million next week.

AGT has had international acts for years now. In 2016, during season 11, a 13-year-old opera singer auditioned, and four days after that was broadcast, she won Romania’s Got Talent. Laura Bretan was an American living in Chicago who went to Romania for a relative’s funeral, and auditioned for their version of the show when she was there.

Likewise, acts from around the world come to the U.S. and audition for the American version—or, like you mentioned, they’re recruited to do so.

America’s Got Talent is the number-one TV show on the summer in the U.S., and last year, was the seventh most-popular show on all of television. Having that kind of platform seems like a dream for any act anywhere, so I can understand why even winners from other shows would want to perform on the AGT stage.

As to your question about eligibility and fairness, the America’s Got Talent eligibility requirements specify only that contestants must be in the U.S. legally—and, if they make it to the live shows, have the ability to work in the U.S. Here’s what the rules say:

1. In connection with my potential participation in the Program, I represent and warrant that I am either:

(i) a United States Citizen.

(ii) a legal permanent resident of the United States.

(iii) possess a current employment authorization card (EAD card) or am in the United States legally at the time of my initial audition.

I understand and agree that I will be required prior to live shows to show proof of unrestricted employment authorization or have appropriate visa status in the United States that allows me to work in connection with Program prizing or the exercise of Program contract options, as determined by Marathon Productions, Inc. (“Producer”), NBCUniversal Media, LLC, Simco Limited trading as Syco Television, LLC Syco Music, and/or Sony Music Entertainment in their sole discretion. If my citizenship, residency, EAD card, and/or legal status in the United States changes at any time, I agree to notify Producer immediately. I hereby agree to complete, execute and deliver, in person, to Producer all required forms necessary to establish identity and eligibility under the Immigration Reform and Control Act. I warrant and represent that I will make all necessary payments due to governmental agencies to comply with the foregoing.

So it’s perfectly acceptable for an international act to audition and participate.

Like The Voice, I think America’s Got Talent is less about finding totally unknown acts and is mostly focused on creating an entertaining television show. That’s why the show recruits acts—it doesn’t wait for acts to come to them, and it heavily produces those acts.

Still, the idea persists that America’s Got Talent acts are all undiscovered, American amateurs—and the title of the show might be one reason for that!

While some people are amateurs, other acts have years of experience, exposure, and even time on other TV shows, both in the U.S. and elsewhere.

Here are a few examples from America’s Got Talent season 13’s finalists:

Of course, that prior exposure doesn’t make them household names, give them weekly time on one of the top-10 shows in the U.S., nor earn them $1 million.

So you can see why any act, from another country or another Got Talent show, would want to be part of America’s Got Talent.

And it’s fitting that the U.S. version of the show would be inclusive in that way. After all, the United States of America is—and has been, throughout its entire history—a place where people from all over the world have come, whether they’re fleeing horrible situations or just seeking better lives and opportunities they might not have elsewhere.

One place where that’s evident is on NBC’s America’s Got Talent every summer. But I don’t mean the contestants.

Just look at the America’s Got Talent judging panel: a Canadian, two British people, and a person with dual German and American citizenship.

Read other answers to your reality TV questions. If you have a question for me, send it in!