Why Adam Ruins Everything’s humor is so effective

With its comical debunking of common misunderstandings truTV’s Adam Ruins Everything has become my favorite scripted nonfiction show. While it uses actors and has writers, it’s dedicated to telling the truth.

But how do you convince viewers of that truth, especially when they’ve been told and convinced otherwise? How do you break through our human stubbornness? The answer: a combination of narrative and humor. But not just any jokes work. Adam Ruins Everything’s humor is effective for a reason.

I explored how the show’s arguments come together—and the use of humor to persuade—in a new article in the September/October 2018 issue of Pacific Standard magazine, which is now online: Saving Critical Thinking, One Joke at a Time.

That wouldn’t have been possible without the time and insight that several people shared with me, primarily Adam Conover, who created and stars in Adam Ruins Everything, and Dr. Danna Young, whose research looks at humor and persuasion in political comedy. (She’s also spectacular on Twitter.)

As with any magazine article, there’s great material that doesn’t make the cut, often because of space, like the detail that there’s an eight-page “argument bible” Conover created for the show’s writers and researchers for season two that “describes the table legs of the show,” as he told me: the argument, the comedy, and the story.

So, here are a few outtakes from my interviews with Conover and Young.

One of the many fascinating things Young shared with me about her research is how humor can either “undermine” or “enhance recall and comprehension” in classrooms. The difference lies in how jokes are structured.

“You can use humor to teach people things because humor is fun and they’ll pay attention and they’ll learn more. The problem is that if the humor that you’re using is not central to whatever the concept is you’re trying to illustrate, all you’re going to do is undermine your audience’s ability to learn the thing. Because now they’re so busy getting a joke and those resources are not dedicated to learning the thing you want them to learn. It serves as a distraction,” she told me.

Adam Ruins Everything’s structure works because “there’s no ambiguity about what he is actually saying,” she said. “The heart of the humor in that show is directly tied to exactly what the premise is of his argument.”

There is one potential problem with the show’s jokes, and that connects to Conover’s character, Adam, and his scripted annoyingness, which irritates the people around him.

As Dr. Young told me:

But Conover wants to keep improving.

“We’re really, really good at the research,” he said. “But speaking to the audience’s emotional truth is something that I am really interested in doing better and better. That’s how you build trust with them, and that’s how you actually change minds.

“There’s a lot of people in life and on TV who just want to say, Here’s what’s true. Mic drop! If you disagree with me, you’re a fucking asshole. I’m going to walk away; I don’t need to talk to idiots like you. That’s fine; I like a lot of those shows, they’re very cathartic,” Conover said.

“But our explicit goal is to change people’s minds about stuff that they care deeply about. Even when we are right, I’m very concerned with how much we get through to people.”

How Adam Ruins Everything models what it teaches 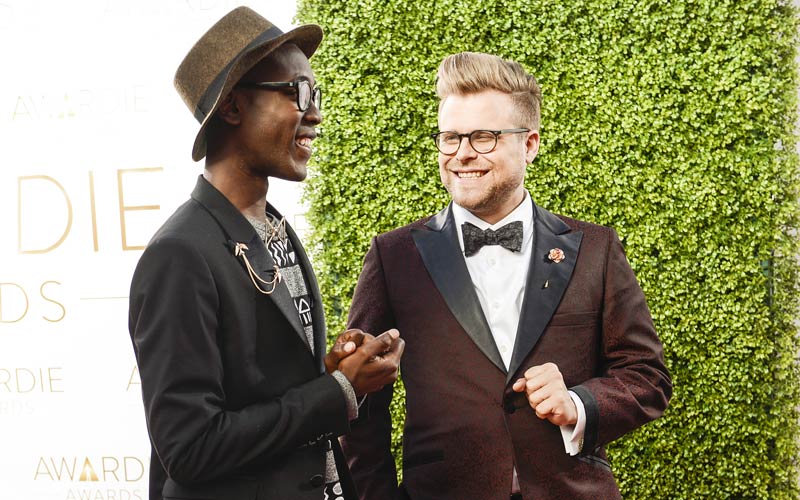 Actor Adwin Brown and host Adam Conover in the season-two premiere of Adam Ruins Everything. (Photo by Erica Parise/truTV)

Two years ago, when I criticized Adam Ruins Everything’s episode on reality TV, Adam Conover responded, in writing and in an interview with me.

Between that kind of willingness to engage critics and the show’s on-screen and online sourcing of its claims, it’s focused on getting things right.

Transparency and accuracy is so important that the series even devoted a season-two episode, “Emily Ruins Adam,” to the show’s own mistakes and potential flaws.

One problem that episode explored was the “backfire effect.” People with strong beliefs actually double-down on their ideas when presented with contradictory information, because it threatens their identity— they put up shields rather than change their mind.

The expert who appeared in the episode, Stephan Lewandowsky, the co-author of The Debunking Handbook, discussed techniques for countering it, including presenting alternative narratives and repeating information.

Adam Ruins Everything, it turns out, does both of those things regularly.

“I didn’t know that when I created the show,” Conover told me for my Pacific Standard story, in part of the interview that didn’t make the final story. “I didn’t know that was a more effective way to teach people.” Instead, he “stumbled into that same process” by thinking about what kinds of arguments worked on him and “imaging myself sitting there watching it in front of the TV.”

Conover also told me that he’s aware that two seasons of ruining things has yet to change the world. Take polygraphs, for example.

“We really demolished that topic on our show,” he said. “We gave a really bulletproof argument for how terrible these things are, and that they shouldn’t be used in any way that is going to affect people’s lives. I was really proud of myself. Then a month later, I was like: Wait a minute. Polygraph tests are still being used.”

Conover is driven by a deep desire to help people, to change their minds, and to use what’s worked on him to convince others. “People are really retreating into their bubbles and having trouble and listening to different sources of information,” he said.