Skip to Content
Omarosa Manigault Newman on NBC's Meet the Press on Aug. 12, 2018. (Photo by William B. Plowman/NBC)

Omarosa Manigault Newman is selling a book about her time working in Donald Trump’s White House, and there seems to be one unifying response to her: ugh, go away.

Even after working as special assistant to the president, she’s still referred to as a “TV villain,” as she has been ever since she became a public figure on The Apprentice’s first season back in 2004.

“Yes, she is very well known. But not well liked. Her brand is about backstabbing, cheating, alienation. As Tyrus said on Fox Monday afternoon, ‘Omarosa is the most despised person in the free world.’ She doesn’t have fans, she has haters. And haters don’t spend $25 on a book.”

Why is she so despised?

The answer is easy, of course: She’s an opportunist, someone who exaggerates and embellishes, and is unreliable, contradictory, and evasive when challenged on her inconsistencies.

She’s also a shameless self-promoter who prioritizes herself and is only trying to make money.

Wait, that sounds familiar—a lot like a man with a 42 percent approval rating and who is now President of the United States, profiting off of that position like no other president has.

Yet Donald Trump is president and Omarosa can’t even pre-sell enough books to beat this scintillating read. Despite having a weekend of publicity and attention, including from the president himself, Omarosa’s book is only at #5 on Amazon (as of 9 a.m. ET).

Of course, the swirl of publicity she’s received for her book’s revelations have not exactly been glowing, and she’s contributing to that.

Friday, she was interviewed by NPR, and said, “I heard the president of the United States use not only the N-word, but as [former Apprentice producer] Bill Pruitt described during that interview, other horrible things during the production of The Apprentice.”

Her book says the opposite: that she only talked to other people who’d heard it. “I was told exactly what Donald Trump said,” Omarosa wrote on page 322. She also wrote: “three sources in three separate conversations had described the contents of this tape.”

When NPR’s Rachel Martin challenged her on the discrepancy, Omarosa said, “Oh, no, it’s mentioned in the book,” and when pressed further, tried to shame the interviewer: “Did you miss this whole—girl, did you read my book?”

On Meet the Press, she changed her story a third time, suggesting that she didn’t hear the tape until after she couldn’t make any additional changes to her text. “After I closed the book, I had an opportunity to go out to Los Angeles and sit down with a person who actually has a copy of the tape,” she said.

On The Today Show, after being repeatedly challenged, Omarosa tried to end the interview, insisting time had expired. Savannah Guthrie then asked, “The book is called Unhinged. Who does that refer to?”

Shade! And also a fair question. 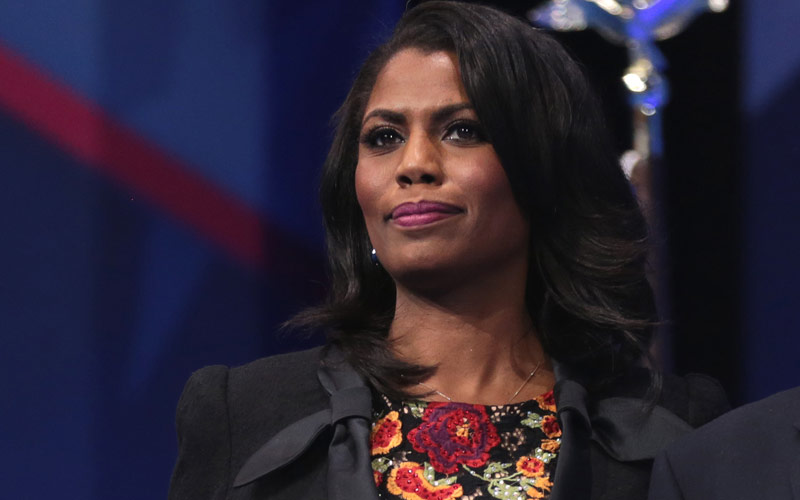 Omarosa Manigult at the 2017 CPAC, the Conservative Political Action Conference, on Feb. 24, 2017. (Photo by Gage Skidmore)

The reception Omarosa and her claims have received have to do with both her reputation and her behavior. But it’s impossible to separate the two, and they feed each other.

Omarosa was introduced to the world with this quotation, which is at the top of her 2004 Apprentice bio:

She quickly started down that path, pushing against her teammates’ decisions and behavior. Here’s what happened in episode two, according to NBC’s recap:

“At the end of ladies’ night out, things got heated between Omarosa and Ereka. Omarosa claimed she had a migraine and was exhausted; therefore, extra cranky. Ereka felt like it was a personal attack against her. Either way, it didn’t bode well for future team efforts. The next day, while the women licked their wounds, the guys prepared to meet The Donald and his consultants.”

The women are partying and bickering, and Omarosa is “cranky” and probably faking a migraine (“claimed” is often used to dismiss someone’s assertions).

Meanwhile, the men are preparing. What are they preparing for? To be fired: They’d lost the task for the second week in a row. Yet the words used to describe them are positive, and there’s not a single word about their emotional state, but that’s nearly the entire focus for the women—including Omarosa.

This recap is just a written version of the way the episode was edited, and Omarosa’s part of the story frequently focused on how “ornery and cantankerous” she was.

I put those two words in quotation marks not because they were used to describe Omarosa, although the description fits, but because they’re from a description of “an archetype” described in a 2004 story by Teresa Wiltz about The Evil Sista Of Reality Television.

Wiltz writes about how “the Sista With an Attitude” “feeds off preconceived notions of African American women” that were “first found in the earliest of movies where slave women were depicted as ornery and cantankerous, uppity Negresses who couldn’t be trusted to remember their place.”

This wasn’t new to reality television: “The image of the angry black woman has always been present on television, particularly in the form of a mouthy harpy,” according to writer and scholar Kimberly Springer’s 2007 essay. “Thus reality TV has adapted this stereotype rather than originated it.”

On The Apprentice, Omarosa “epitomized the Angry Black Woman, the Evil Black Bitch, and every other variation on that particular racist and sexist theme,” Springer wrote.

But while Omarosa fit into those pre-existing themes and categories, she simultaneously challenged viewers. Springer writes that Omarosa:

“confounded reality TV’s visual codes for women in general and for black women specifically. She’s beautiful, but beautiful women are supposed to be dumb. For a man a take-no-prisoners attitude in business would usually be just the thing to succeed in the cutthroat corporate world, but a black woman with attitude has no place in Trump’s or any other white-dominated institution. Both her supposed attitude and uncompromising nature cancelled out any black lady or modern mammy roles she might have assumed.”

In other words, she wasn’t what we expected, nor was she doing what she was supposed to do. 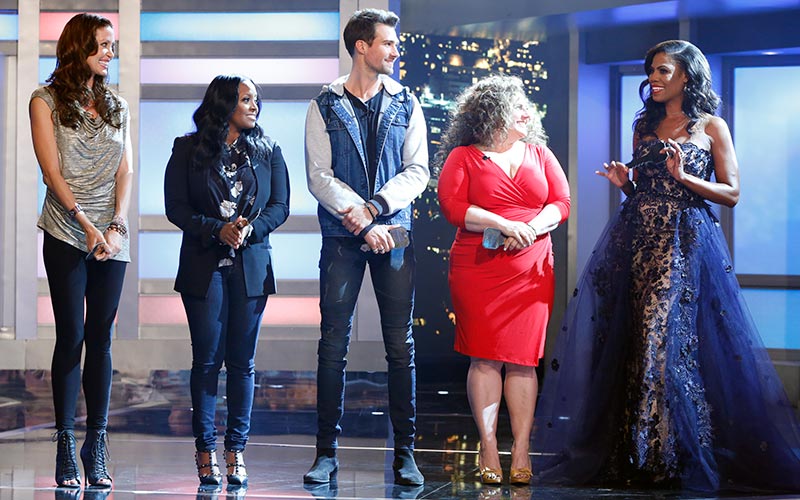 Who is Omarosa, really?

Omarosa has directly addressed these stereotypes and roles before. In 2004, she made the interesting argument that the women who were calling her names were believed, while she was cast as the villain: “I am a bit confused as to why I’m the villain when these women have physically attacked me, called my character into question, called me everything but a child of God.”

She told The Washington Post’s Teressa Wiltz that the editing “is a gross misrepresentation of who I am.”

Omarosa has had years since then to prove who she is outside of television, though it’s notable she kept returning to heavily edited television, including The Apprentice, and partnered with Donald Trump for the TV One series The Ultimate Merger.

Also, when she’s not edited, as in the interviews she gave this weekend, Omarosa still comes across as combative and untruthful. I find myself rolling my eyes, even when what she’s saying matches what I know to be true—or want to be true.

But I keep coming back to how well being combative and untruthful worked for Donald Trump, and how it continues to be used to dismiss Omarosa. Sure, many people use that to dismiss Trump, too, but there seems to be a very different standard for an older white man than a younger black woman.

They’re both labeled as reality TV stars, but The Apprentice established Trump as a successful businessman and Omarosa as nothing more than a fame-seeking reality TV star, neither of which were fully accurate.

“What the fuck has that ho done?” Ice-T asked about Omarosa in a New York tabloid back in 2005, using gross language that reduced her to a sex object.

Omarosa earned a master’s degree at Howard University, and worked for Al Gore’s office and the Commerce department in the Clinton administration, though she did not receive rave reviews.

She’s gone from being a kid who, at seven, lost her father (he was murdered) to an adviser in White House.

In the meantime, she became an ordained minister, and not like I did by filling out a form online. She was engaged to the beloved actor Michael Clarke Duncan until he died in 2012, and married a Jacksonville pastor last year.

Isn’t it possible, and even probable, that we don’t fully know Omarosa, even though she’s been a public figure for 14 years? Isn’t it likely we don’t have a complete sense of who she is?

As much as I think that’s true, I also know that what she does publicly is often confusing and confounding.

“Every critic, every detractor, will have to bow down to President Trump,” she said during a PBS interview before the election, both demonstrating and promising the kind of terrifying loyalty Trump desires and prizes over all else.

She was rewarded with the most senior-level job and highest-paying salary possible in The White House, though not even she could explain what her job actually was.

On Meet the Press, Omarosa explained the shift from ardent supporter to prominent detractor. “Being used by Donald Trump for so long, I was like the frog in the hot water. You don’t know that you’re in that situation,” she said.

She said she was trying to have influence and represent the interests of black people, though she admitted, “Obviously, I failed miserably.”

If we’re going to judge someone, it should be based on their actions, not what they look like.

But with Omarosa, it’s impossible to separate those, because she was introduced as an edited television character—a character who was disorienting because she both affirmed and upended stereotypical expectations of black women. She was a woman who dared to attempt to “crush the competition.”

Everything since has been filtered through that initial impression, which was formed by Mark Burnett and Donald Trump’s Apprentice.

It’s an impression that allowed her to be dismissed as a talentless “ho” and seriously called “the most despised person in the free world”—because, what, she got into arguments on a reality TV show, and then had the audacity to try to capitalize on that fame instead of disappearing?

“You helped make me a star,” Trump said when he fired her from The Celebrity Apprentice.

But what did Trump, and his show, make Omarosa?