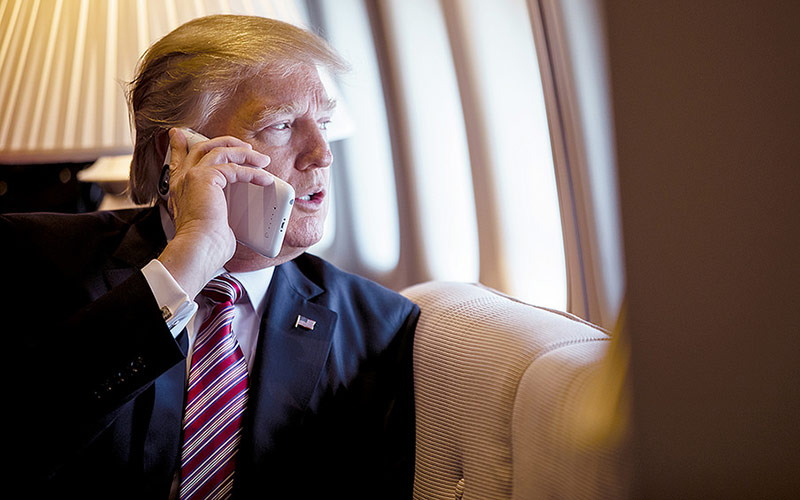 Donald Trump used the n-word during production of The Apprentice season one, according to excerpts from Omarosa’s new book that will be released Tuesday.

Unhinged: An Insider’s Account of the Trump White House is described by its publisher as “[a] stunning tell-all and takedown from a strong, intelligent woman who took every name and number.”

In the book, Omarosa Manigault Newman writes of her “growing realization that Donald Trump was indeed a racist, a bigot and a misogynist. My certainty about the N-word tape and his frequent uses of that word were the top of a high mountain of truly appalling things I’d experienced with him, during the last two years in particular.”

That’s according to excerpts from the book published by The Guardian today.

The book also says Trump said things like “What do you think she’s like in bed?”, “Do you think she’s sexy?”, and “Who you think would be better in bed between the two of them?” about female contestants on the show, though this is not a surprise since those kinds of objectifying, sexist remarks often aired as part of episodes on NBC.

During her time in the White House, Omarosa writes, she investigated to see if there was a tape of Trump using the racial slur, and while she has not heard it herself, she writes,

“I was told exactly what Donald Trump said – yes, the N-word and others in a classic Trump-goes-nuclear rant – and when he’s said them. During production he was miked, and there is definitely an audio track.”

She also writes that:

“three sources in three separate conversations had described the contents of this tape. They all told me that President Trump hadn’t just dropped a single N-word bomb. He’d said it multiple times throughout the show’s taping during off-camera outtakes, particularly during the first season of The Apprentice.

… It had finally sunk in that the person I’d thought I’d known so well for so long was actually a racist. Using the N-word was not just the way he talks but, more disturbing, it was how he thought of me and African Americans as a whole.”

While Trump’s racist comments are well-documented, both in the past and in his time in office, there has been no audio or video evidence released of him using the n-word.

The New York Times reported that “The White House initially declined to respond to the allegations in her book,” but “By midday Friday, Mr. Trump ordered the White House to respond.”

That resulted in this statement from White House press secretary Sarah Huckabee Sanders:

“It’s sad that a disgruntled former White House employee is trying to profit off these false attacks, and even worse that the media would now give her a platform, after not taking her seriously when she had only positive things to say about the president during her time in the administration.”

While it’s likely she and others will (continue to) try to discredit Omarosa, it’s worth remembering that Omarosa was hired by Trump and paid the highest salary of any White House staff members in her job as assistant to the president and director of communications for the office of public liaison.

Omarosa was fired in December, when Trump tweeted, “Thank you Omarosa for your service! I wish you continued success.”

Last week, The Daily Beast reported that “Omarosa secretly recorded Trump” inside The White House, and The Washington Post listened to those recordings and reported that they “match quotations recounted in the book excerpts.”

Omarosa will be on NBC’s Meet the Press to discuss the book this Sunday. Her bio on Amazon’s book listing says “[s]he currently serves in pastoral ministry at The Sanctuary @ Mt. Calvary Baptist Church in Jacksonville, Florida, where her husband, John Allen Newman, is the senior pastor.”