Here’s your look at the week ahead—or week and one day, since this also includes next Monday, which is Labor Day in the United States.

It’s a relatively slow week for new debuts, but many summer shows are still going strong, from Big Brother to The Real Housewives of New York City reunions, while others are wrapping up, included the dreadful ABC series The Proposal and The Great Food Truck Race.

The biggest news is that the new Channel 4 version of The Great British Baking Show will be available in the U.S. for the first time starting Friday.

Netflix is airing season eight, which first debuted last fall. (Season nine is debuting in the UK this week. As always, this GBBO guide will help with seasons.) 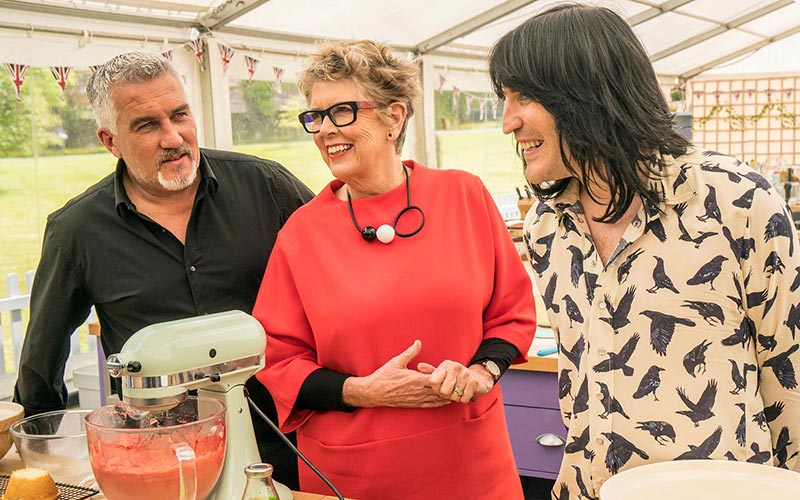 The Great British Baking Show judges Paul Hollywood and Prue Leith, plus host Noel Fielding, on season 8 of the Channel 4 show, which is now coming to Netflix. (Photo by Channel 4)

Speaking of UK shows: All episodes of the new The X Factor UK season 15 will be airing in the U.S. just 24 hours after they premiere overseas (AXS TV, Sundays at 8).

Also on Netflix: a new season of Ultimate Beastmaster: Survival of the Fittest. (Netflix, Aug. 31), during which more than 100 contestants from nine countries compete on the massive obstacle course.

Perennial favorite My Cat From Hell is back (Animal Planet, Saturdays at 8), with Jackson Galaxy usually discovering why a cat’s owners are to blame for their cat’s terrible behavior.

Bravo’s Real Housewives-with-a-different-name series Married to Medicine (Bravo, Sundays at 8) returns for its sixth season, while Garage Squad is back (Velocity, Wednesdays at 9) for a fifth season of helping people finish their car projects.

Comedian Tom Papa hosts a new series Baked (Food Network, Sept. 3, Mondays at 10), on which he travels around to try baked goods—not food with pot, though I’ll bet that title causes some confusion.

Khloé Kardashian is an executive producer on the new Twisted Sisters (ID, Sept. 3, Mondays at 10), which looks at “shocking crimes” committed by sisters. Do the Kardashians make an appearance?

“High risk rescues and rehabilitation efforts” of wolves—byLockwood Animal Rescue Center and its team of combat veterans—is the subject of Wolves and Warriors (Animal Planet, Saturdays at 10).

On Friday, I’ll publish my quarterly list of reality show debuts for fall, so check back to see what’s coming in the months ahead.