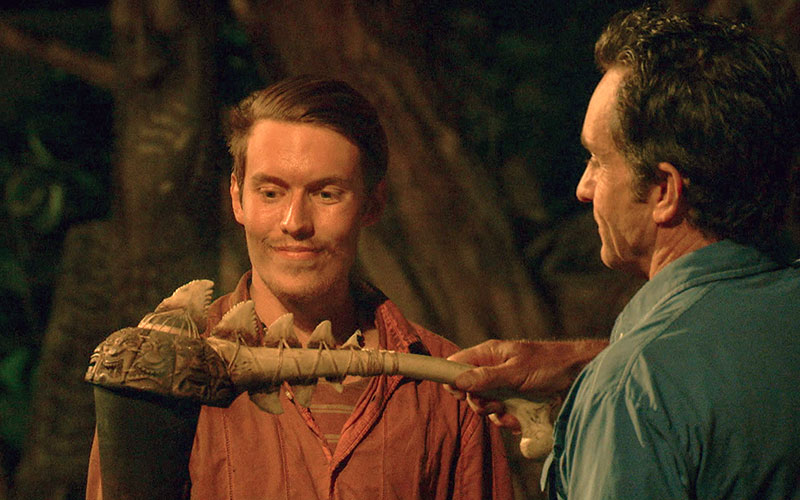 Apply to Survivor now so you can get your torch snuffed by Jeff Probst, just like Donathan Hurley did during the Survivor Ghost Island. (Screen shot by CBS)

Survivor seasons 39 and 40 are now casting—and proceeding for the first time without casting director Lynne Spiegel Spillman, who was fired earlier this summer.

The two seasons will be filmed next year, in the spring and summer, for broadcast during the 2019-2020 television season. (Survivor 37 and season 38 have already completed production.)

In a video posted last night that announces casting is underway, Survivor host and showrunner Jeff Probst offers a deeply moving inspirational thought that is sure to motivate the “future Survivor players” he is addressing:

“I look forward to snuffing your torch because that is what is going to happen to most of you.”

To be fair and not just snarky, he does also precede that with “we look forward to seeing you on the show,” and he follows his torch-snuffing delight by saying, “Survivor is the greatest adventure you will ever experience, so get up off your butt and apply now, right here.”

“Here” is a URL, CBSSurvivorcasting.com, which Probst has scrawled onto the cardboard backing of a legal pad. He’s not instructing people to tweet videos at him, which he’s done previously.

The casting team in the video includes these people, who Jeff Probst mentioned on Twitter:

Those who speak have some simple advice, which is basically this: be yourself and don’t try to impress us.

After citing well-edited and gorgeously shot application videos, Tannenbaum says, “We don’t need that. We just want to know who you are.”

Lynne Spillman—who had cast both Survivor and The Amazing Race since the very beginning of both shows, and continues to cast TAR—previously told me what makes for great Survivor applicants, though that might not be great advice to follow any more.

Will Survivor 40 be all winners, or have new players?

“We are just starting the casting process for season 39,” Probst says in the video. “We’re just getting underway. This season would shoot in March and April” 2019.

Because Probst mentions only season 39, that’s prompted speculation that they’re not casting for season 40, which would be an all-winners season or have some other kind of returnee twist, thanks to its milestone status.

That’s certainly a possibility—and we are overdue now for a returnee season, and with all these lame themes and crazy twists for newbie seasons, I’m ready for one.

But the show’s casting website makes it clear that they’re actively looking for people for both Survivor 39 and Survivor 40—and there’s even a specific start date for season 40: Filming will begin at “the end of April for Survivor 39 and the first week of June for Survivor 40,” though the frequently asked questions page notes that “dates are tentative.”

Of course, the show casts a wide net and narrows later, and the production often changes things at the last minute. So, I don’t think there’s much to read into Probst’s comment or the fact that they’re casting new players for both seasons.

And this is just the very first step in the casting process. For a detailed account of how the process works, read my story about Big Brother finals casting, which is how casting works on CBS shows.